Chewy has a Home and Heart

October 16, 2012--New photos from Chewy's new life! Kim says "He is still OTJ! I am Thankful everyday for DCIN rescuing him from the shelter!"

August 21, 2012: Chewy continues to improve and is loving his new life.

His mom writes "I woke up this morning with Chewy laying by my side and I just wanted to Thank You for saving him!...I really LOVE Chewy—he is a Wonderful Cat!"

We are so happy that both Chewy and Kim found each other and we look forward to many more updates. 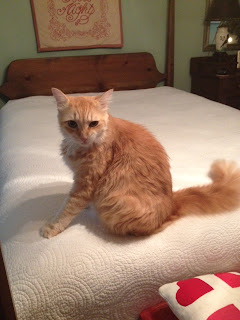 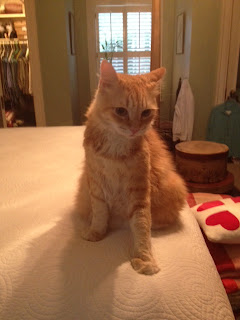 April 23, 2012--DCIN is thrilled to announce that Chewy has found a furever home and heart, and he didn't have to go far to find it. Kim has signed the adoption papers and has told Chewy that he is home. Chewy yelled YES.

All our best to Chewy and Kim. They are both forever a part of the DCIN family.

April 7, 2012 --DCIN is very excited to congratulate Chewy and his foster mom, Kim.  It has been over 2 weeks since Chewy received insulin. It appears he is now OTJ!!

February 24, 2012--Chewy went to the vet yesterday. He is in the early stages of an upper respiratory infection---he is on amoxicillin and "some type" of eye drops. Kim also had a urinalysis performed and, happily, no ketones. Chewy is underweight. He weighed 10.5 pounds--the vet said he should be between 13 and 15 pounds.


Chewy is doing Great! In the shelter papers, his previous owner said he could not jump. I assumed that was true due to some neuropathy. I let Chewy stay in my bedroom last night.....I woke up at midnight to give Kitty her midshot and he was running around with a catnip mouse in his mouth!

Since he "supposedly" couldn't jump, I put a bed on the floor for him. WELL, this morning, I woke up to a big purring boy laying beside me on the bed!!! So much for not being able to jump--maybe he was just avoiding his owners! Chewy is a GREAT cat--cute personality and purrs constantly! I am trying VERY hard not to fall for him!

February 18, 2012--Chewy is from Wake County NC Animal Care, as were three other diabetic cats--Sweet Potato, Jaspar, and Molly (GA).


We are learning the ropes with Wake County. The shelter's outreach coordinator calls DCIN, DCIN and the shelter work to find a local rescue who will foster the cat, DCIN provides insulin, testing supplies, and education if needed, and we adopt out the cat to an excellent home and heart.

Chewy was an owner surrender. We don't know much about him yet. He's a big boy, said to be a Maine Coon Mix. He tested negative for FIV/FeLV, and received his rabies and FVRCP vaccinations before he left the shelter. He is now fostering in a private home an hour southeast of Raleigh NC.

Kim, a DCIN friend who went to the shelter to evaluate Chewy says he looks "rough." The photos she took for us support that. He started ProZinc insulin last night. His blood glucose levels have already been reduced--into the mid 200s--simply from the change to all-wet food that the shelter made.

Chewy can only stay in his local foster home for two weeks. Because we wish to find him a permanent home and heart before the end of his stay there, we are listing him as 911. Although we have a back-up foster, she is in another state and that would require a transport. We prefer to move Chewy only once.

Chewy is going to be a beautiful, big, fluffy boy once his diabetes gets regulated and we get him groomed, including getting all his mats out. If you have a place in your home and heart for Chewy, please contact his case manager, Jennifer, at Jennifer@dcin.info.
Posted by Venita at 4:41 AM

What a sweet face he has...there is no doubt he will be beautiful once again!