May 17, 2013--Klinger's family helped him to the Rainbow Bridge yesterday. He was having serious, unexplained seizures. Their hearts are absolutely broken. On the FDMB, Marcy wrote:


Goodbye Sweet Klinger
We love you so much.
Our boy.
Our best friend.
Our heart.
Fly free Klinger. I can't tell you how much you'll be missed. We learned
so much from you and everyone here and on FB Acro.
Thank you for being ours.

March 26, 2012--Thank you all for donating for Klinger's care and praying for his recovery. DCIN has just sent a check to the credit card company for the $620 we raised for his ER care. 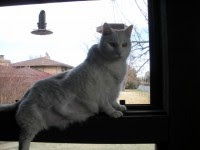 Since his cardiac event, the miracle kitty Klinger has gotten some vision back. He also was tested for Acromegaly, and his test came back above the reference range. Marcy tells us that she had Klinger tested because of the recommendations of some of the Acro-Moms. "Acromegaly can be a secondary diagnosis with Hypertrophic Cardiomyopathy (HCM). The list of causes for HCM in adult cats is pretty short ("causes- excess cathecholamines, hyperthyroidism, acromegaly, hypertension")."


Klinger has been improving all day. He's eating, his liver values, potassium, and ketones are all in the normal range. His last BG was 225. He's growling and fighting with the vet techs - which is his normal behavior. He has an appt with the cardiologist tomorrow morning and then I think we might be able to take him home.

The chip-in and PayPal donate buttons to help with Klinger's hospitalization are below.


Thank you so much for keeping Klinger in your prayers. We just got back from visiting him. They moved him out of the oxygen cage. His blood pressure is normal. His potassium was a little high, so they removed that from the intravenous fluids he's receiving. His liver value is elevated, but she's pretty sure it will come down soon. He ate the smelts and shrimp we brought him. He was pretty growly with us, but he usually is at the vet, so we weren't discouraged. He has an appt with the cardiologist tomorrow morning.
They called us yesterday when they were still trying to revive him. He was gone for 10 minutes...10 minutes is a heck of a long time. We were there and saw him at his worst - it was scary and I won't go into detail here...I still picture him like that when I close my eyes. Anyway, he looked awesome today compared to yesterday. Here he is in his non-oxygen "room"

He still needs your prayers, love, and support. We still can't thank you all enough.

The chip-in and PayPal donate buttons are below.

February 19, 2011--Klinger went in for a dental yesterday and during the procedure went into Cardiac Arrest. The vet was able to be revive Klinger, but he still is in very critical condition. He is now in ICU and is experiencing the following concerns:


The first 24 hours are critical in his recovery, but the vet did say his blood work looked good for a cat that had survived a cardiac arrest. According to the vet, maybe one percent of cats are able to be brought back from cardiac arrest.

DCIN has created a chip-in to help Klinger. In addition, I will call the ER to see whether we can get Marcy a rescue discount.

I've been told that the chip-in site has a problem with its security certificate. In case you get that warning and do not want to use the chip-in, please use the PayPal donation button below. You end up in the same place, but your donation will not be added to the chip-in total.


Donate through PayPal for Klinger in ICU.