Molly, a DCIN Success? I Think So. 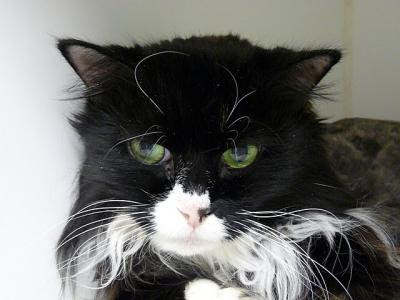 June 9, 2011--Sadly, the shelter did not do things as differently with Sammy as I hoped it would, but the rescue coordinator did her best and Sammy was saved.

The shelter's vet marked Sammy to be killed because he was diabetic. The vet said the shelter did not have the resources, money or staff, to treat a diabetic. But the rescue coordinator spent her day off finding a rescue that would take him. That rescue coordinated with DCIN to treat Sammy's diabetes, and Jennifer in CT adopted Sammy on May 29, 2011.

April 30, 2011--
Molly's Wondrous Legacy. I received a call this evening from the rescue coordinator of the shelter that Molly was in. The shelter had another diabetic surrendered on Friday afternoon. I don't yet know his name.

Thank you, Molly, for opening hearts and minds.

Molly is being euthanized at the Wake County NC Animal Care, Control, and Adoption Center today. She has a depressed temperature of 94, an upper respiratory infection with secondary pneumonia, and untreated diabetes. She was surrendered to the shelter by her owner of her full 14 years because he was moving and she couldn't go. Molly, from her picture a long-haired beauty and according to the adoption director very personable, was so full of mats that she couldn't walk. The shelter staff shaved everything but her head.

In her younger years, Molly had been a spokes-cat for a Southern brand of pet food. Molly probably got all the dry food she cared to eat. Now she was sitting, shaved to the skin, in a metal cage exposed to shelter bugs. The staff noticed Molly's water intake last week, her second week in the shelter, and got a blood glucose test in the 300s. It is likely her owner knew her condition.

What does DCIN do, some people wonder, besides shift insulin from cat A to Cat B? DCIN tries to rescue cats like Molly. And although we did not get to Molly soon enough to save her, our efforts for 90 minutes this morning show that we are becoming an effective organization.

I received an email about Molly on Wednesday morning that I didn't answer right away because I was "enjoying" enhanced pain meds for my post-surgical pain. I answered it at 1am this morning, as I was listening to BBC coverage on the Royal Wedding. The shelter's placement director (PD) called me around 10am to let me know that Molly was slated for euthanasia because she had come down with a URI and the shelter had no resources to treat her diabetes.

I had offered insulin and supplies in my mid-night email, knowing that often is a barrier for shelters. But that wouldn't help, said the PD. Molly's cage already is marked and today is her "D-Day." Catchy term I hadn't heard before.

I thanked the PD, and explained how DCIN could help in the future with other diabetic cats with insulin, testing and other diabetic supplies, and mentoring. There might be someone close who could come in to demonstrate and discuss the care and feeding of a feline diabetic.

I posted a "fly free" notice on Facebook, and the troops started to rally.

Jennifer (FDMB's Tucker's Mom) offered Molly a home. As I was reading that, FDMB's Hope and Baby also called to offer a home. I called the PD back, and told her that I had two homes if they could hold and treat Molly's diabetes for up to two weeks while I arranged transport. The PD checked with the Shelter Director (SD), and again said no. They could not hold Molly past today. Molly's D-Day had come.

I posted on Facebook, the FDMB, and Diabetic Cat Care that I needed a two week foster in the Raleigh, NC, area. Hope called back telling me that if I could get Molly to a vet, she would pay for that cost. FDMB's Terri and Lucy stepped forward to foster. Yet another call to the PD. Yet another check with the SD. This time they said yes, we could take Molly, provided her health condition was such that she could be humanely released. The PD was concerned because she saw Molly shivering in her cage this morning. (No, the shelter had no heating pads.) The PD sent me a batch of paperwork that I started filling out to become a "partner" with the shelter and was approved to pull animals from them.

Meanwhile, I am talking to Terri setting up the pull and for her to take Molly to the vet, maybe even for the weekend (or longer) because Terri's Lucy is in bad shape and Molly might be as well. I am talking to Hope about how to pay for the vetting and where I can call her later in the day and what kind of insulin to start Molly on. I am talking to Jennifer about the suddenness of this (I hadn't yet sent her the emails I had received about Molly) and whether Terri's fostering of Molly might affect Lucy's health. And I needed to ask Maureen to email the shelter to let them know that DCIN continues to function as an affiliate of the Catnip Cottage.

And then the PD calls. The vet examined Molly. A depressed temperature. Secondary pneumonia. It would not be humane to release her for treatment. It would be humane to kill her.

Thank you Hope, Jennifer, and Terri for coming together to try to save Molly. We lost Molly but not this battle. Now the Wake County Animal Care Center knows DCIN is here, and willing to help, and hopefully this won't happen in that shelter again.

So that's what four DCIN supporters can accomplish in ninety minutes. That was just this morning. Let's see what the afternoon brings!!

And every single one of the DCIN supporters who followed Molly's unfolding story this morning are among the loved ones that Molly's new star will be shining down on tonight.
Posted by Venita at 12:01 PM