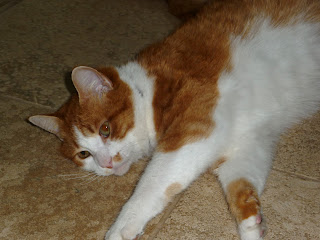 March 22, 2012:   Sadly, Malachi was let go this morning.  He stopped eating and was vomiting, at the clinic he was very sick so his family helped him cross to the Bridge.  Fly free little man.


February 28, 2012: Malachi has until May, that's the deadline given by a family member.

Mal is actually pretty lazy! He doesn't care about cat nip or small toys. He likes to chase long toys, like felt fish on a string. When I go in the bathroom and close the door, he pokes his foot around under the door, and I playfully grab at him, and we do this repeatedly. He thinks this is great fun. Speaking of him being lazy, once there was a mouse in the lower level and we chased it into my son's bathroom and it ran into the walkin shower. We put Mally in there and stood on a barstool to look over the top. He didn't even catch the mouse in a 4 x 4 shower! The mouse didn't really interest him much and that is back when he was fat.


The food he eats is from Pet Smart and is a dry food with high protein called Wilderness.


He is currently on 2 units of PZI, increased from 1 unit starting dose.


February 17, 2012:   Diagnosed around December of last year, sweet Malachi, a wonderful young man in Kalamazoo, MI needs a home quickly.  He is altered, weighs about 10 pounds, down from 20 pounds earlier.  An indoor/outdoor kitty but prefers to stay indoors.  He's not a lap cat but does like to next to you on the couch and loves a good brushing. 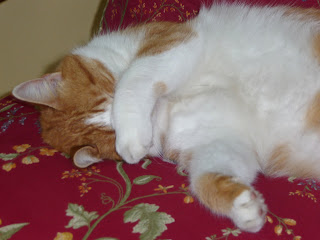 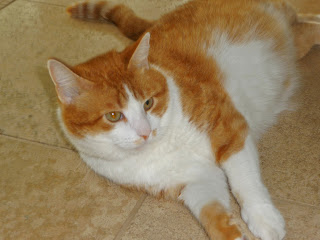 Malachi does not live with other pets but there is a dog that comes to the house on occasion and they ignore each other.  When outdoors there's another neighborhood kitty that he sits near, they are not best buds but they don't fight.  He would probably do well with other cats in a household and he likes children.

When first diagnosed ketones were present when the vet checked him but since then they have not appeared.  There is no history of hypoglycemic episodes.

His family loves him very much but due to medical reasons they cannot keep him and treating him is not easy because of the medical issues.