May 17, 2015--So sad to say that dear Kelly has left for the vastness. The actual cause is unknown. She seemed healthy enough but her Mom found on the floor in a coma and she passed shortly after that. (((((Dale))))) we are so sorry for your loss and (((((Kelly))))) may you continue to feel the love your Mom has given you for the 5+ years you have lived with her. ~Venita


"I noticed that it's been a year since Kelly went OTJ. Just celebrating and bringing it to your remembrance. Thanks for bringing the sweet girl to me last year."

Update 3/25/10--Kelly is now living with Dale. This is Dale's 4th DCIN diabetic cats; the other three are now diet controlled and off insulin.

I mentioned on the FDMB that I was flying to Arkansas to visit some dear friends for a few days. Dale replied:


You're gonna be in Arkansas this weekend??? Dang, you should have told me sooner. You could have brought me a diabetic cat from your area.

I reminded Dale about Kelly and the adoption snowballed from there. I got her reservations on my flight, and the rescue got her a health certificate and brought her to me at the airport. When I arrived in Arkansas, there was a snow/sleet storm, and Kelly stayed with me two days until Dale could come get her.

Kelly is a shy girl, but I did find that she would engage. I think she just needs her own person, which she will now have with Dale. While I had her, she wasn't eating well, and her normal 2U of PZI Vet weren't getting her out of the 300s, even with shots every ten hours. (The PZI had some age on it, as I was drawing the final drops from the bottle.) Kelly bleeds well, and didn't at all mind the ear pricks. I would pet her after the test, and the last couple times, she would give me an elevator butt.

Dale has changed Kelly to Lantus, starting with .5U. Kelly is living in a room with Sillci and Clarabelle. 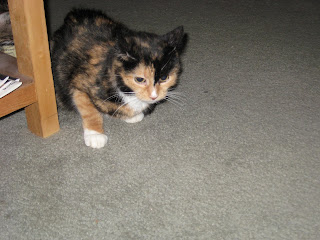 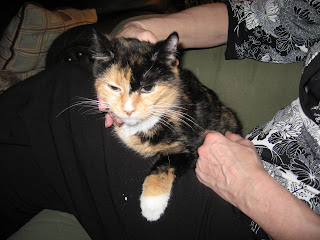 Along with the pics came Kelly's foster Mum's further description of Kelly's personality.


She tends to stay put wherever you place her and spends most of her time next to her food, water and litter pan unless you pick her up and move her. She has started coming out a few steps in the morning when she hears Lise in the kitchen but is always very close to her bowls. Not sure what the issues are but any new home should be prepared for this type of reserved behavior. She may never be an "engaged" cat.

I've had an "unengaged" cat before, and I loved him deeply. I felt I did the right thing rescuing Bailey after he had been stuck in a cage in a no-kill shelter for almost 2.5 years. If you want to read Bailey's story, and how deeply he wormed his way into my heart, I wrote his obituary on my breast cancer blog.

Update 2/25/10--Kelly had a home visit today from Donna, a member of the FDMB. This is what Donna had to say.

I met Kelly today, Venita, and what a sweet, timid little girl. She is a very pretty tortie with white socks. She has the cutest little round face. She looks young. She let me hold her and did not fight. She wiggled a bit, but did not struggle to get down. I sensed sadness and confusion. She has had many places to live and I think she just needs one person to stay for the long haul. I don't think she needs to be the only animal except maybe she needs to be in a quiet household with another laid back cat.

She appears healthy. I can't feel her spine, eyes and nose without drainage, eats well, has gained weight since coming to her foster family, walks well. Her blood sugar, close to shot time, was 375. She quietly sat in Lise's arms while I stuck her ear. No problem, didn't even flinch. Two hours after shot, BS was 156, according to Lise.
She still urinates more than usual, but doesn't have excessive thirst.

I hope with all my heart that someone will open their heart to this baby. She will make a nice friend. I will personally donate $100 to the adopter of this special sugargirl. Donna

Kelly is a diabetic girl in foster care in eastern PA, near Doylestown. Or maybe she isn't diabetic, but she is getting insulin shots.

This is the description I got from the foster Mum:


Kelly is a Torti, spayed, DSH of undetermined age. She is not declawed. She is eating DM both wet and dry. Her appetite is good. She is a midsized cat and a little on the thin size, although she has put on some weight since arriving here. She is extremely shy but is easy to handle and behaves well at the vet. She lives with a dog and 2 cats. She doesn't seem fearful of them but does not interact. She has not been exposed to children. She was picked up as a stray with a litter of kittens and I am the second foster home she has been with.She has not bonded. Her diabetes was discovered when she was placed up for adoption and it was noted that she had excessive thirst and urine output.That was about 2 months ago. She is currently getting 2 units of PZI twice daily. I monitor her BG twice a week. They are checked about 1/2 hour after insulin is given. Her readings have been between 90 and 120. I know of no other health issues.

This is the first note I got about her, written from her foster Mum to the foster organization:


She is not a happy cat. I think our other animals are a problem for her. She has been here quite awhile and has not progressed. She does not venture out and seems depressed. Her appetite is down and she is stressed.

I've had to adjust her insulin. Her BG's have been low because she is not eating enough. We really feel our home is not appropriate for her. I realize your problem is finding someone who is willing to take on a diabetic cat but we are not doing her any good. We can't watch her be so fearful and unhappy; it is unfair to her. She needs to be an only cat or someplace where she can be isolated but have room to roam.

One of the folks at the rescue wrote me back:


I would DOUBT the cat needs to be an only cat, but needs to get more attention that she is getting in the current household.

More on Kelly's purrsonality from the foster Mum:


She is extremely shy and withdrawn. when pick up and engaged she normally will bury her face but not try to get away. I have some neuro concerns with her, she seems to not be quite all there, a very flat affect.


So let me tell you why I think Kelly needs a new home. From what I can piece together, she came into the Cat Tales Animal Rescue as a stray with a litter. (Therefore, she's got to be relatively young, right?) After she weaned her litter, she was vetted in June and July 2009, including a negative FeLV/FIV test, a spay, and FVRCP and rabies vaccinations. In early October 2009 she was taken to the vet with some classic diabetic symptoms (excessive drinking and urinating, weight loss, increased appetite) and tested with a blood glucose level of 624 mg/dl. She was discharged on 2u PZI BID and DM dry and wet food.

Ten days later, Kelly was taken back to the vet. She had regained the 2 pounds she had lost before diagnosis and was still PU/PD. The vet ordered her insulin increased to 3u pm (staying at 2U am). There is no BG level for that day in the records I received.

A month after that, Kelly was taken to the vet because of symptoms of a urinary tract inflammation/infection. Her BG level (without morning food or insulin) was 93, a non-diabetic number. She was taken off insulin for the weekend and given antibiotics for the urinary tract inflammation/infection. She also received a fructosamine test and showed a level of 285, between "excellent" glycemic control of 300-350 and "prolonged hypoglcemia" (low blood sugar) of <250. The next Monday, Kelly's BG level was 373 and the vet advised restarting insulin at 1 to 2U. I also note that the foster Mum tests Kelly's blood glucose level twice a week and is finding her in normal range 1/2 hour after her insulin shot (before the insulin has a chance to kick in). I advised the rescue that I thought Kelly's pancreas might be trying to show signs of remission, and made suggestions of increased hometesting, a change in diet to low-carb commercial food, a shot/no shot line of 180 mg/dl, a food test after a BG test >180 mg/dl before insulin is given, a reduction in dose if insulin is given, and ketone testing of urine. I offered myself and the FDMB for consultation. I offered to pay for a meter and glucose test strips.

The rescue cannot or will not follow my suggestions. Therefore, it appears to me that to keep Kelly safe, we need to find her a home where she will receive appropriate treatment for her maybe-diabetes. I am planning a hands-on, eyes-on visit to evaluate Kelly in the near future. If someone more local to Doylestown could do that, I would be happy to have that happen. If not, I am willing to take the 3-hour trip to check her out.
Posted by Venita at 8:59 PM