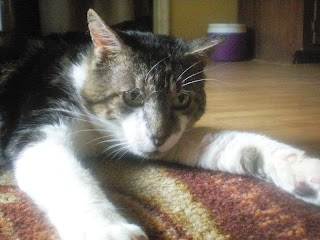 
Jacob had a heart attack while I was at church Sunday morning and passed away. Thank you DCIN for your support and help. We all miss him so much. The other kitties in the FIV room miss him terribly. Rainy and Karen stayed with him and guarded his body until we found and buried him, and his 3 girls, Rainy, Karen and Mouse held silent vigil watching his funeral as we buried his body beneath the large front window he used to sit in with them of the room they shared. Artorius misses his friend and is asking for and receiving many more hugs than normal. We all miss this loving kitty so much. Jacob was always so generous with his love. 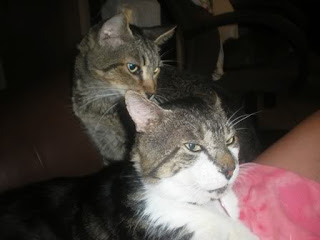 April 25, 2012--Jacob is NEVER grumpy. But he was during his last pet therapy session. The reason? Pain. His mouth is inflamed and he has 3 broken canine teeth. With the required senior bloodwork, the dental with extractions, and the rescue discount for Our Lady of Mercy's Catnip Cottage, this is going to cost $600.

Let's see whether we can get Jacob his dental so that he can get back to his pet therapy work. His fans at Life Care miss him!


"Jacob's blog mentions his skin infection and fur issues. That is LONG behind him. His fur has been normal, thick and healthy for quite a long time now. He has no discernable allergies, so the fur loss was simply caused by the infection which we cleared up quite a long time ago.

The blog also mentioned he was on Amitriptaline for stress. He was only on it a few months and weaned off that quite a long time ago. The stress was obviously caused by his stressful life conditions when he came into the Catnip Cottage. He was homeless for an indeterminate amount of time, and lived in a vet's office for several months. Jacob is now a very happy boy and is quite easily one of the most laid-back, relaxed and loving big ole marshmallow's I've had in the Catnip Cottage. He is a steady, reliable fellow and a favorite for our Cat Therapy program.

Jacob eats Taste of the Wild (the green bag) dry food, and he does eat canned food now when offered to him. OK, I still wouldn't call him obese, but he IS... errr.... filled out generously?"

Update 11/4/10--Jacob is still with Maureen and still looking for a home. He has become an awesome therapy cat, but in September lost his therapy companion and best friend Franklin, shown with him in the second picture above.

DCIN collected funds to help finance Jacob's cardiology exam. Maureen's report after that exam on May 14, 2010:


The vet was very impressed with Jacob's improvement and condition. He didn't look anything like the vet was expecting, having read his charts before meeting him. Jacob put on a pound and a half since coming here. He is still diet-controlled.

His heart murmer was even slightly less. Vet said such a thorough work-up was done by the vet who turned him over to me, and the ultrasound was very good and comprehensive that he does not need to refer him to another cardiologist. My vet can now manage Jacob's heart himself. No meds started for that yet, just that the vet will continue to follow it for now, particularly since he is seeing improvement in Jacob in the 2-3 months he's been here. So, we will not be needing to use Jacob's funds at DCIN right now, particularly because he has a guardian angel on the board that is sponsoring him. That will cover his visits with my vet and his medications.

He does have a skin infection. That was what was causing the hair loss. He also does seem to have FHS, which is probably going hand in hand and caused the infection from Jacob's overgrooming. He received antibiotics for the infection and we are starting him on amitryptaline to try and help calm his stress.

And of course, we are continuing Interferon for his FIV status.

DCIN forwarded all of Jacob's funds to Maureen to cover any of her costs for Catnip Cottage.

Update 4/13/10--My husband thinks I'm doing our taxes, but I am finally updating you all on Jacob.

Jacob is a 6YO, altered male, DSH classic tabby with white bicolor currently in foster with Maureen at Our Lady of Mercy’s Catnip Cottage.

Jacob is a loving, sweet, and affectionate cat. He has NEVER met a soul he doesn't instantly love. This big boy is an absolute marshmallow - soft, squishable and sweet as he can be. Jacob just gives the very best hugs, and is liberal with offering massages! He is wonderful with cats, dogs, and kids. Jacob is one of Maurren's cat-therapy cats and has been doing very well at pet-therapy sessions thus far.

Jacob is not declawed and is muscular and large, not obese or underweight, weighing 12 ½-13 lbs.

Jacob is FIV positive and a diabetic. He was diagnosed diabetic shortly before Maureen took him in, on insulin for awhile, but Maureen has had him diet controlled since early March 2010. He is accustomed to occasional blood glucose testing.

Jacob also has been diagnosed with a low-grade heart murmur and possible Hypertrophic Cardiomyopathy. His heart will be reevaluated in 3 months, a diagnosis and possible treatment plan mapped out.

Jacob is Felv negative and his rabies, FCP, and Feline Leukemia vaccinations are current.

Jacob was founds as a stray. When he was discovered to be FIV positive, the person finding him did not want to adopt him. When he also developed diabetes and a heart issue was discovered, the vet’s office that was trying to adopt him out was going to euthanize him as they did not think he would be adopted. That's when Maureen stepped in.

Jacob has a great appetite. He may have food allergies that result in hot-spot skin problems, and Maureen is still working on figuring out what food or food ingredient may be causing it. Jacob prefers dry and eats it VERY well; he is free-fed dry. He will nibble at canned when he’s in the mood for it.

Vet records for Jacob are available and will transfer with him. His current vet prefers all contact be through the rescue coordinator, which is Maureen.

If Jacob's adoption fails--Maureen says he


MUST MUST MUST be returned to us at any time or point in his life if the adoption does not work out. We MUST be notified in advance if the current adopter who was approved to adopt Jacob by Our Lady of Mercy’s Catnip Cottage wishes to rehome or give Jacob to anyone else. In such case, we MUST approve the new home and WILL follow up on the placement afterwards, if approved. Microchips are implanted into all adopted cats prior to placement and are registered to Our Lady of Mercy’s Catnip Cottage, and we MUST remain on the notify list of microchips throughout the animal’s life. We will NOT waive these requirements because of distance or for any reason, ever. We will waive an adoption fee to a qualified adopter.

I love Maureen. Among all her other stellar attributes, she is so protective of her babies.

As you can tell, adoption of Jacob will not be through DCIN processes but through Our Lady of Mercy's Catnip Cottage. Jacob's Petfinder page is here. DCIN will help to coordinate his transport to a long-distance home.

Original post--2/21/10--Maureen of OLM Catnip Cottage sent this email to me.

Hi everyone.
Just an update on Jacob the FIV kitty.
He has developed diabetes and was started on insulin yesterday. I believe that he will most likely be euthanized next week if a suitable home can not be found for him.
Unfortunately, the diabetes diagnosis makes it much harder to place an already difficult to place cat.
If you know of anyone who can foster or adopt this loveable guy, please contact me immediately!
I can be reached at the clinic today and tomorrow or on my cell the rest of the weekend at 843-338-5394


Maureen has emailed the folks and said she would take Jacob in. Thank you so much Maureen.

I have promised Maureen that Cats in Need would sponsor the costs of Jacob's diabetes treatment and any other medical care he would need for as long as she has him. To that purpose, I would ask people to help me build his treatment fund. There is no rush on getting monies because Cats in Need has a pretty healthy unrestricted balance right now, but I am putting Jacob on the ongoing fundraising list along with Ahi, The Orinch Boyz, and Bumperic. The PayPal account is ennis93 AT att.net. Diabetes supplies will be welcome. If Jacob is on Lantus, I know some of you will share extras you received from the free pen coupon last year.

You may be aware that Maureen has closed the doors of Catnip Cottage to incoming cats because of outbreaks of FIV and FeLV. Her post on the FDMB is here. Jacob is an exception to save him from euthanasia. I have the feeling that Jacob could be a transient diabetic. There's likely steroids involved, and dry food being fed at the vet's office, and stress on a compromised immune system. Amazing how many CIN diabetics go into remission just by settling into a home and getting off dry food.

Jacob still needs a purrmanent home. He cannot stay forever at the Catnip Cottage. I have joined a number of Yahoo FIV groups and will be posting him there. I will post him on diabetic message boards as well. And I can hope that someone here will take him into his/her heart and home.

Maureen or I will post additional information once Maureen gets him and assesses him.
Posted by Venita at 10:34 AM

I am so sorry to hear about Jacob's passing. My deepest condolences..