September 17, 2013--Clarabelle passed quietly at home last night, taking a piece of her Mom's heart with her. Fly fee, Clarabelle. You were a great cat, and you are a great spirit. ~Venita

Update 9/30/10--Dale chose to bring Clarabelle into her heart and home. Dale's friend Samantha (on the right) flew to Philadelphia on September 9, 2009, to pick Clarabelle up from Amber, vet tech extraordinaire who worked so hard to find CB a home. It didn't take CB long to go off the juice, and she remains a broken diabetic, happily sharing her home with several other diabetics (both on insulin and off. I sincerely thank Dale for being one of the greatest rescuer of diabetic cats that I know. From DCIN she has adopted Gordon and Derby, Clarabelle, Sillci, Kelly, and likely others I can't quickly recall, as well as offered a home of last resort for some that found other homes. Dale, you are a GEM!!! 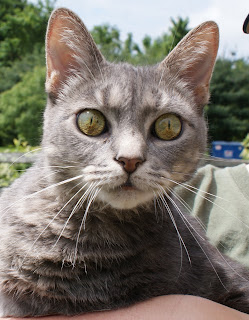 This is Clarabelle, a very sweet, local diabetic cat that Leslie and I visited back in June. At that time I wrote:

Please meet Clarabel. She is an 11.5 YO, front declawed diabetic available for adoption. She is at a vet's office ... west of Philly and north of Wilmington, DE. CB had been a housecat, actually a basement cat.

Because of a serious illness of a family member living in the house, her people weren't paying much attention to CB except to notice that she was urinating and defecating outside her litter box. They took her to the vet, got the DX of diabetic, and asked to have her PTS. Caring for CB at the same time they were caring for a parent with terminal cancer was more than they could handle. They agreed to sign CB over to the vet for placement. Clarabelle has been at the vet's, in a cage, for five months.

Clarabel seems to be a sweet cat. I held her, and she was not fearful or aggressive. She's a pretty silver grey with a little tabby marking and dark amber eyes. It is unknown whether she has lived with other animals, and her ability to live with other animals is unknown. The vet tech said that CB is not friendly with the hospital cats, but neither is she hostile. The vet tech said CB would make a great lap cat. Except for her teeth and cataracts, there are no other known medical problems. (Cataracts are not unusual for a cat her age, but the vet notes say she is not blind, and she did not act blind.) Her kidney values look good. She is a touch underweight in her hindquarters (weighs about 10 lbs), but that is not an unusual look for an unregulated diabetic cat. As for her teeth, she has tartar and gingivitis, but the practice owner said they would give her a dental before she was rehomed--if we could find her a home.

I would love to see this cat better taken care of. She needs space to roam and a person to love. She is on "N" insulin, 5 units BID. She is on DM dry and Iams canned.