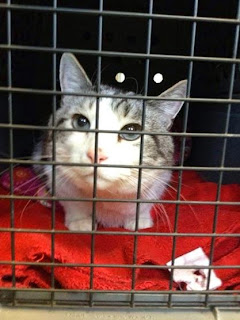 April 1, 2014-- LINUS HAS GONE HOME! Last Saturday, Linus said goodbye to all of his HART friends and traveled with his new mom and dad to Massachusetts where he has gone to his "happily ever after". Linus will have a feline sister and a doting mom and dad who have promised Linus, NO DRY FOOD! :) DCIN couldn't be happier for this wonderful blue-eyed boy! 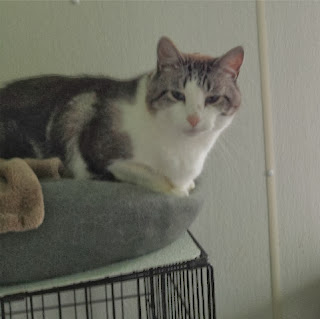 November 14, 2013--Linus, HART's beautiful Siamese boy is still OTJ. He currently eats Wellness grain free canned food and prefers the beef and salmon flavor. Linus is a laid-back boy but does love attention! He loves the feather wand toy and loves to be brushed. He gets along well with kitties that don't swat at him or aren't mean to him. Linus is not the aggressor but will definitely hiss and back away from kitties if they are not nice to him. Please contact HART to adopt Linus... transport may be available! 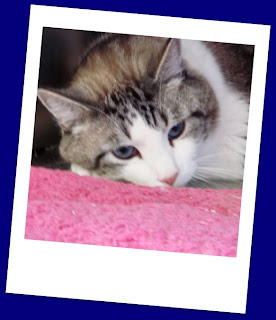 August 8, 2013--Linus is Off the Juice (OTJ)--in diabetic remission. He hasn't needed insulin for three weeks.

As an aside, HART of Maine has a new room for its diabetic kittehs. They have twice the space, twice the windows, and half the stress. They also are getting a MP3 music system to play classical music to keep their stress levels down.

May 16, 2013--Linus currently only likes to eat either Fancy Feast Flaked Fish and Shrimp or 9 lives Tuna canned food. His blood sugar tends to go too low if he is on 1 unit of Lantus BID but starts to creep up if insulin is withdrawn, so he is currently only on 1 unit of Lantus once daily. Linus does tend to become stressed at the shelter and it is hoped that in a quiet, comfortable home, he might not even need that little bit of insulin. Linus only gets along with certain kitties in the diabetic room, but doesn't like Wilma as she tries to eat his food.

October 24, 2012: This handsome little man is a courtesy post for a diabetic friendly shelter group in Cumberland, Maine.

Linus, a stunning 9 year old Lynx Point Siamese, is a new addition to the shelter and he came to us on August 28, 2012. This shy boy was surrendered to a local vet, who in turn contacted us to see if we could take him. How could we say no to this face?

Linus wasn't sure what to think about being in a shelter at first and wasn't even sure if he wanted to eat. We have managed to convince him that the shelter is a safe place for him to stay until he can find his forever home.

Linus has vivid blue eyes and a quiet meow that actually sounds like a soft, raspy “eck”. He is a solid, large boned cat who is a bit sedentary. Linus loves attention and never seems to get tired of being brushed, petted or scritched under the chin. Toys don't seem to hold much fascination for him, but maybe we just haven't found the right one yet!

Linus is currently on 4 units of Lantus insulin BID and is on a diet of Classic Style Fancy Feast and Taste of the Wild Grain Free Dry. Ideally, in a less stressful environment, his insulin dosage may decrease, along with a canned food only diet. At the shelter, all of the kitties have access to dry due to Angus and Tam's preference for dry food. 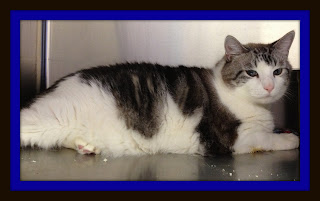 However, in a home, with one-on-one attention to his eating habits, Linus can probably be converted to a canned food only diet. Linus doesn't approve of insulin shots nor does he approve of home testing. He must usually be tricked into accepting either by lots of attention, brushing and petting. Linus seems ok with the other kitties in the room, but will give them a wide berth and keeps to himself. Ideally, Linus should go to a quiet home that is patient with his shyness and will encourage him to interact and know that he is safe.

We aren't sure if he would be accepting of a dog, but we guess that he may possibly be ok with a quiet, calm canine as well as a family with older children. Please contact the shelter with any questions you may have about Linus, we'd love to hear from you! To contact HART, here is the link to our website: http://www.hartofme.com/. For a blank adoption application, click on this link: http://www.hartofme.com/documents/HARTadoptionapplication.pdf.
Posted by Jennifer at 6:33 PM