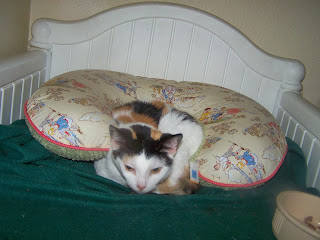 May 14, 2015--Dear Penelope passed recently. Our deepest sympathies go to her adoptive Mom, who had and lovingly cared for her for 19 months. Fly free, sweet Penelope. You will always be your Mom's horseshoe kitty. ~Venita

November 11, 2013--Penelope's Mom went to Goodwill and found her this pillow. It's chenille on one side and has a print of children at play on the other. Penelope lays in the center of it and has formed it to her body shape. Penelope "owns" the pillow and the toddler bed it is on. 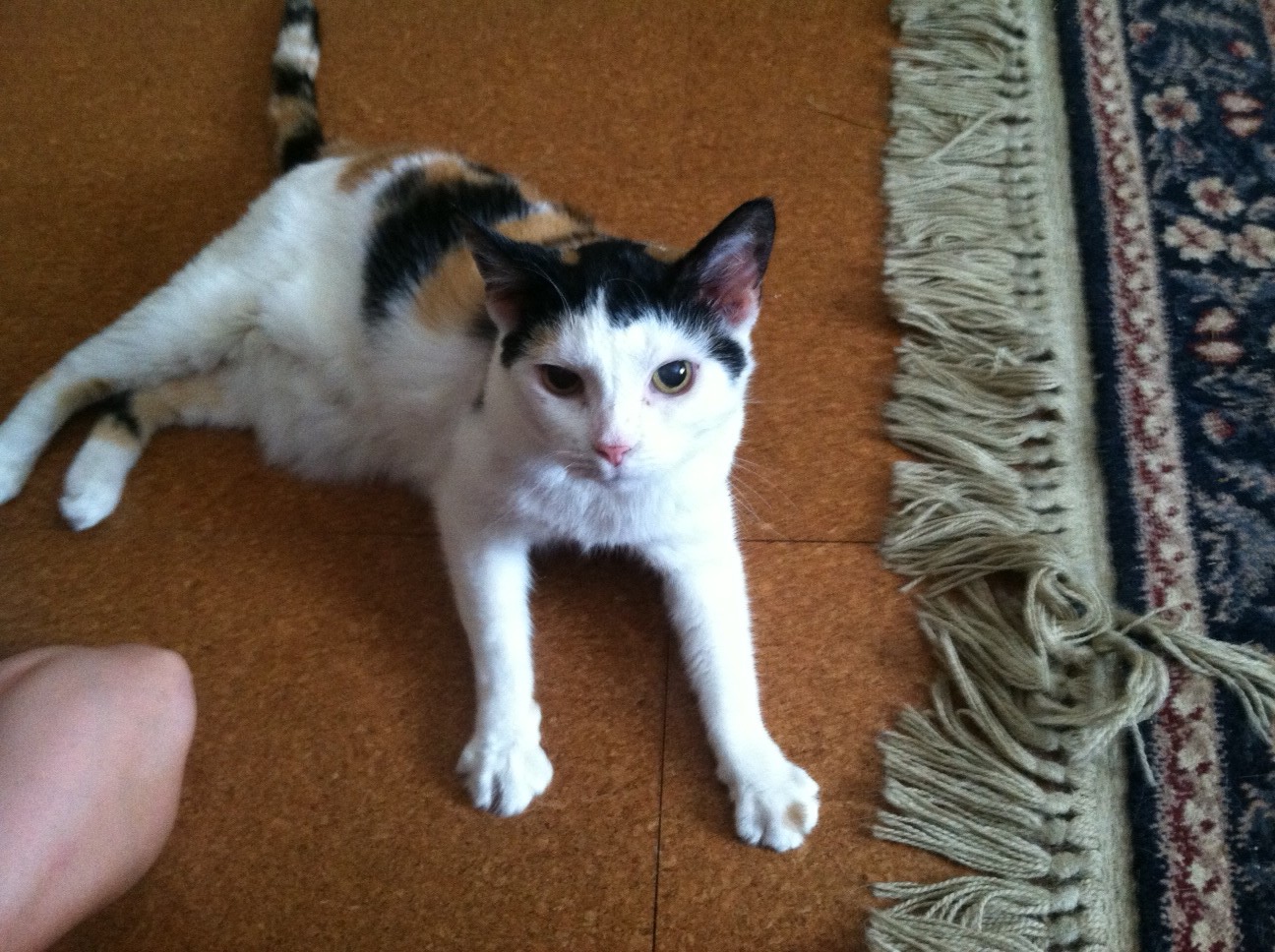 October 14, 2013--DCIN has been notified that Penelope is at risk for being put down. She has about a week. Her insulin needs have increased and she was peeing on a rug. Please contact Jennifer@dcin.info for information on how to adopt.

September 5: 2013-- Sweet Penelope is currently on 2 Units of Lantus twice a day and doing well.

Her rescuer says the following: "Penelope no longer has noticeable issues with her balance but does prefer to stay on the floor. She will jump down from the bed but never gets on it herself. She's been very loving with anyone who visits her but doesn't appreciate my other cats so would definitely need an adjustment period in a house with other cats. She doesn't mind the dogs but swats them (with her clawless foot) when they get too pushy. She's a sweet cat and deserves a home where she can be free and receive more attention than she does living in my spare bedroom." 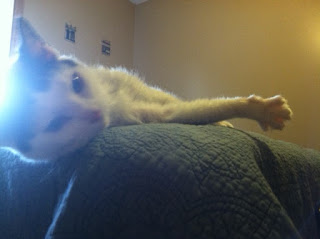 May 6, 2013--A veterinarian in Ohio was presented with a stray cat for euthanasia a few weeks ago. Due to her fabulous personality the vet could not justify euthanasia and had the person who found her surrender her. Penelope spent a few days in the hospital and had a dental cleaning with multiple extractions. It was then discovered that she was diabetic. She is currently in a home setting but confined to a bedroom. This sweet cat would be best served in a home where she can be part of the family.

Her care giver writes: "Penelope is a female, spayed, declawed (front only) calico kitty in Vandalia, Ohio.  She was diagnosed with diabetes one month ago.  She is currently well controlled with 4 units of glargine insulin twice daily and w/d food.  She does prefer can food (but will eat dry as well) as she had horrible dental disease and many teeth had to be removed.  Her age is unknown as she was presented at the vet for euthanasia as a stray.  I would guess her to be 10-12 years old. She is currently 9 pounds with some muscle loss but is improving every day with treatment.  She also has an inner ear infection in her right ear that is resolving with treatment but may always lead to a minimal degree of unstableness when jumping or shaking her head.  She walks quite well but stumbles when she shakes her head. 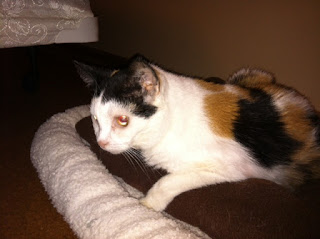 Penelope is currently an indoor cat and should remain so due to her vestibular disease and the fact that she is declawed in the front.  She appears to like some cats but not others.  She is very laid back and loving.  She enjoys attention such as petting and brushing and doesn't react to the insulin injection.  She is a very loud "talker" when she wants breakfast or if you are cleaning her ears which she doesn't enjoy.  She has a great appetite and is starting to put weight back on now that her diabetes is controlled.

She has easily accepted home testing with a glucometer using an ear vein.  Her last glucose reading was 112mg/dl at 5 1/2 hours post insulin.  A fructosamine level will be drawn in 3 weeks to be sure her control is adequate.  A full CBC and chemistry panel was done at the time of her diagnosis and no other health issues were revealed.  A negative FeLV/FIV test was done upon admission to the veterinary hospital at the end of March.

I am the cat's current foster home and veterinarian.  She was presented to me for euthanasia by a woman who had found her two days before.  I have been unable to find her previous owner.  She is not at risk of euthanasia but is confined to a bedroom as my dogs would chase her and I have one cat that doesn't allow other cats in his territory.  Penelope is a sweetheart. I think it's unfair for her to spend the rest of her life in my spare bedroom if a better home can be found for her."
Posted by Jennifer F Alvarez at 9:58 AM