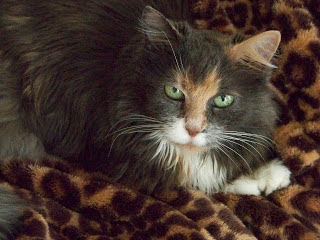 September 13, 2013--*tears* Sadly, MC died overnight. The vet doesn't know the cause, and I want to think MC passed of a broken heart, mourning the unexplained absence of her Mom, Hope, who has been in the hospital and rehab for two weeks because of a stroke. Whatever the cause, MC is at peace now, having known in her last ten months of life the incredible love of an incredible woman.~Venita


She's doing great.......completely out of her shell and such a love. Purrs, loves head butts and kisses and her amps today was 189! Started shooting side instead of scruff and seeing much better numbers. Her tail is completely filled in from where she had a section that had been cut for a matt and her tail now is gorgeous.......full bloom. She's got long fur all over......legs, feet, belly.....thank God she loves to be combed.

Today I found some little mats forming on her belly so instead of trying to comb out from such a sensitive area I held her in my lap and slowly cut them out. She was so good. Loves sleeping in the computer chair on her blanket. She is just so precious and loving and I love to just sit and hug her. Thought you might like to see two pics of her taken yesterday.

November 25, 2012--MC had a comprehensive vetting with Internal Medicine and Cardiology vets and checked out A-OK. The day before Thanksgiving, she had a dental procedure and although she sacrificed seven teeth, she came through that remarkably well. MC is in great shape for an old girl.

MC has a leaded glass window between her room (the Family Room) and the kitchen. She watches her Mom through that window.

October 31, 2012--MC has been in her new home for about 10 days, and she is becoming a most-happy little girl. The first few days she was frightened with all that was happening with her, but now she is fully integrated.

MC is hanging out on the top side of the furniture in her room (rather than under or behind it), eating her food (even waiting for it), purring when she gladly accepts her combing (her fur is getting really silky and she has a beautiful tail), watching the wildlife and her Mom through the windows, preening (a pretty girl's face must be cleaned after meals), and peeing and pooping religiously in her box. She is wonderful with her BG tests and her insulin shots. MC will be going to meet her new vets this week.

We are thrilled that MC has such a wonderful new home, and that her transition has been remarkably easy on her and her new Mom.

October 7, 2012--In less than a day, a complicated problem dissolved to whisps of smoke as folks across the country stepped forward to help send MC to her new home. Sarah (and Velcro) from the FDMB stepped forward to be MC's escort on the flight. Lani's husband. Charbonneau's new Dad, donated United frequent flyer miles and Lani spun some magic to find perfect flights.

There were driving offers, but the flight alternative came together so quickly that there was no need to spend the many hours that coordinating a long-distance ground transport usually takes.

Just the small details remain--getting MC to the vet for her pre-flight check-up, getting her carrier, establishing meet-up points as MC transfers from her Dad, to Sarah, and to her new Mom. And some more donations to put together the $450 that this transport will cost.(The members of DiabeticCatCare.com separately donated $120 so the chip-in target has been reduced to $330.)

DCIN has a potential adopter in the Flint, MI, area for MC. If you are able to help us find flights, travel with MC, or donate frequent flyer miles, please contact Venita@dcin.info.

We also want to start raising money for MC's pre-transport vetting and her travel. At this time, we don't have an estimate of the cost and have left the target amount blank. 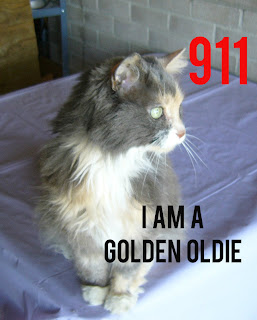 September 30, 2012--MC is well regulated on a tiny bit of insulin twice a day and small frequent meals.

Her caregiver plans to sell the house, and does not want MC or her litter box there while it is being shown. She will be euthanized within two months if a new home cannot be found for her. Can you open your heart and home to a sweet senior? We can't send her very far because we don't want to fly this old lady.

August 4, 2012--MC (Mamma Cat) is a 16-17 year old long-haired calico in MN just north of the Twin Cities. She is generally shy, but a sweet cat. She doesn't do well around other people at first. She has never lived with dogs, and rarely with other cats. MC is sometimes a lap cat, but not always. MC came to her current caregiver after his and her Mom died.

MC was diagnosed diabetic on June 7, 2012, during a visit to the vet. She went to the vet because of severe weight loss. She has not been DKA and but did have mild seizures one day on some low BG numbers. Other than the weight loss, MC hasn't had clinical symptoms of diabetes.

MC is on BCP PZI, a sliding scale that has been reduced from her initial dosing scale. She is "sort of" accustomed to home testing. I think we can all guess what that means. But she is tested with some regularity.

MC eats on low-carb wet food. Her caregiver says that she may have dental issues and he believes she has some missing teeth. He isn't aware of any other possible physical problems, and says there are no known behavior problems. MC hasn't been to the vet much in recent years, and her caregiver isn't aware of her FIV/FeLV or vaccination status.

MC may be at risk of euthanasia, but there is no set timeline. "She's a pretty sweet little cat once she gets to know you."
Posted by Venita at 3:47 PM

For pete's sake what is wrong with people! I am just at a lost of words from these peoples cruelty. They have no respect for life!