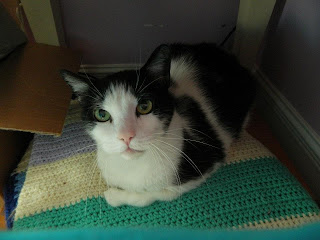 May 28, 2014--Sweet Mischief joined his original person in the vastness today. As hard as his adoptive Dad worked at it, this 17+ YO kitty never could get regulated and then recently developed a serious infection inside one eye. His Dad decided that ending Mischief's suffering was the kind thing to do.

May you find joy, Mischief, is being reunited with your original person and may you both wait patiently at the bridge for the rest of your family to arrive. ~Venita

October 9, 2013--Mischief is still with his adoptive Dad and doing just fine!

August 8, 2012: Sweet Mischief has been a DCIN assisted kitty May of 2011. His person is not his original person, sadly his person passed away and the nice gentleman who has Mischief now promised to care for him no matter what. Mischief's adoptive Dad is on a very limited income so DCIN has been sending supplies.

Currently there is difficulty getting his blood sugar to come down so DCIN is paying for him to go to the vet and get checked out.

Please help DCIN get this little man healthy. Thank you. (Chip-in widget removed.)
Posted by Jennifer at 11:48 AM