Camigwen has a New Home, but she is Sick

September 1, 2013--Update from Cami's Mom: "Well, it seems like someone has replaced Cami with a facsimile that likes to cuddle in bed in the morning, go out on the balcony by herself (and stay out for many minutes at a time), sit in my lap to be brushed, and wait patiently in a chair or on the testing table for tests. Although this new cat does, on occasion, channel the original Cami with some growls over meds and hissing at my other cats when treats are being passed out.

I am finally getting her BG back under control, her appetite is good and she is less bloated than ever before. I'd like to think that is from one of the two new supplements I am giving (krill oil and spirulina) and/or the better digestive enzymes. She does still have inconsistent stool (from soft and formed to way too soft, bordering on diarrhea), but she has not had a blockage since early May (knock wood / anti jinx) for which I am grateful.

And, from her last check-up, her weight in up to 8-1/2 lbs and her BUN and creatinine are back down.  I think that she will never be 100% healthy/cured from the mega colon issue, but it can be well managed for now.

All in all, I'd say she is doing her best since I got her, especially personality-wise. I haven't gotten her to play with any toys yet, but she is acting like a normal cat instead of an angry, starving animal."

Yesterday morning started great, cuddles in bed with Mom and a treat after her BG test. But suddenly Cami started throwing up and straining to poop, then would lay on her side and push at the air with her back feet, almost as if she was having seizures. She growled when Mom tried to touch her. "I was afraid she was dying - like something ruptured inside."

Mom quickly got Cami to the vet and after an exam and X-Ray the vet found she was impacted with stool. She received fluids, anti-nausea meds, a laxative, and three enemas. She is better, but she still hasn't passed all of the stool. She has meds at home to hopefully take care of the rest of it.

This is an expense Mom simply cannot afford and DCIN hopes that its friends can help Mom with this bill. Thanks! ~Venita

Postscript--Cami returned to the emergency vet the night of 4/23/13 for additional treatment for constipation. The differential diagnosis is megacolon. Cami was at the ER vet for two nights. That ER cost is not part of what DCIN is raising in the above donation link.

March 21, 2013--Cami again saw the specialist today. She received bloodwork and X-Rays; an ultrasound was not needed. The vet is pleased with how Cami is doing, that she is not seeing the fluid in her belly anymore, the lung shadows are gone (might have been pneumonia), and that she seemed much "brighter" in appearance and behavior. She has gained a little weight (5 ozs).

But, the enlarged organs and lymph nodes are still the same and the vet can't rule in/out lymphoma at this point. This could be a severe inflammatory situation that depressed her immune system and a bacterial infection took hold. The bacterial infection is probably being taken care of from the Baytril (which she will be on another two weeks). Cami will be on pred for "months" along with several anti-inflammatory supplements.

Cami is a sick girl. She has had trouble breathing, her bloodwork values show lots of abnormalities, her imaging shows fluid in her abdomen, and she may have lymphoma. DCIN is trying to help her adoptive Mom with the costs of imaging; Mom is handling the other costs, including the vet visits, labwork, and medications.

From our YouCaring.com fundraising site:


Sheila adopted Cameron (FKA Camigwen) through DCIN last October, and has worked really hard to transition Cami into her household. But now possible tragedy. Cami saw two vets, including a specialist, last week and she may have lymphoma. Her abdomen was full of fluids and she was having trouble breathing.

Cami is responding to medication and feeling better, and it may be (we hope, we hope) something other than lymphoma--maybe just an inflammation of some sort.

DCIN paid for Cami's ultrasound last week. She has another vet visit with ultrasound and X-Ray in two weeks. DCIN doesn't have the money in its general fund to again pay for the imaging. DCIN will pass through to the vet whatever we raise for Cami's upcoming visit. Please donate if you can. And please send good thoughts Cami's way. 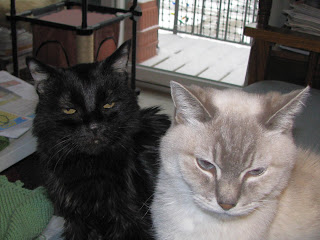 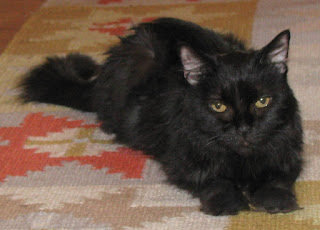 Cami is doing so much better! My call for help from the universe was heard! She is much calmer. She has been sitting in the LR when the rest of us are out there, sitting and waiting patiently for me to prepare her food, and being interested in catnip. A few weeks ago she barely sniffed it.

She is very responsive to the whole testing process: knows the microwave ding (rice sock) signals the beginning and comes to the table. She even has  gotten up on it herself a few times. She is pretty patient during the test and purrs when I give treats afterwards. She still spends most of the time in the hall near the front door, which is out of the general traffic pattern.

We still have ups and downs - days when she seems to purr every time I reach down to pat her and other days when all she does is voice objections at me. I pick her up and put her in bed with me almost every morning for a cuddle. Sometimes she purrs; other times not. She did well on her OTJ trial until the past two days when she started creeping up and, unfortunately, she was 183 this morning. She still has some digestive healing to do so I am still hopeful that she can make it to OTJ.

October 19, 2012--It's official! Cami has found a new home! It's taking her a little time to adjust to her new surroundings but her future looks bright. She is now receiving insulin; her BG's range from 100 (nadir) to upper 200's to low 300's for pre-shot. Her new mom says she has quite an appetite and is eating between 12-15 oz per day! She will even be taking her first family vacation with in the next few weeks!

August 2, 2012:  Located in Illinois, beautiful Camigwen has been living in a temporary home and doing very well, but recently diagnosed with diabetes she needs to move somewhere that she can get the treatment she needs.

At 12 1/2 years young, this long haired black beauty is spayed and declawed. Her person writes the following:

"She weighs about 8.5 lbs and is an indoor only cat.  Cami is very sweet and likes a quiet and low key environment.  She is affectionate but will growl when you start to annoy her.  She is also very content to be by herself.  She likes to sit on the tile in bathrooms or in the sun.  She LOVES being brushed.  She will almost always come to you if you show her favorite brushes.  She is very good at the vet.  She will sit on the exam table and not make any noise, especially if you keep petting her.  She doesn’t love riding in the car, but she isn’t difficult to get in and out of her carrier.  She gets acclimated to other pets, but some adjustment time is usually required (~1 week).  She currently lives with another cat and she has lived with a dog (Pug) for the last 7 years, too.  She does not do well with young children, though. 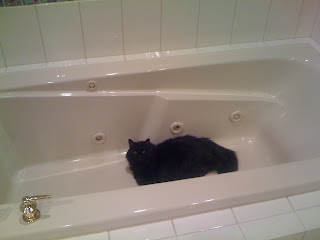 Currently, Cami is living in a temporary home…. She’s been doing so well there and has returned to her normal self.  The angel who’s taking care her can’t look after her now that she has developed diabetes, though.  She had been losing weight and peeing outside the litterbox over the last month, so we took her to the vet on 7/26 and she was diagnosed with diabetes.  She had a blood glucose analysis and urinalysis performed, and her glucose levels were high and found in the urine.   However, no ketones were found and she has no history of hypoglycemia.

She hasn’t started receiving insulin since we cannot afford the treatment and monitoring her glucose curve to set the appropriate dose, so she doesn’t have any experience with the insulin treatment process.  We’re in the process of getting her switched to a diabetic food.  She does has a very good appetite. She eats exclusively dry food, but loves wet food when she can sneak it from another animal in the house.  She is up to date on all her vaccines and tests, and any potential owner can certainly speak with her vet.  Otherwise she has always been and continues to be very healthy."

Since contacting DCIN, Cami's diet is being switched to Fancy Feast canned classic varieties. For more information please contact: JennF@dcin.info
Posted by Jennifer at 9:10 AM