August 24, 2012--In November 2003, we lived in a townhouse community of 64 homes. Morgan, a big red tabby, looked like he had been lost or abandoned and of those 64 homes, he chose to move in with us. He walked into our lives and changed everything forever.

Mr. Morgan was a gentleman with real style and a ladies man. You could almost hear him say “Hey baby want to snuggle” as he glided up to the couch (Morgan moved to a Barry White soundtrack), settled down and curled into you and purred with the force of a jet engine.

In our family we had two humans, two Maltese and one cat; we were out of balance. We realized we needed a cat for Morgan and he came to us in the form of a six week old kitten we found outside hiding in the bushes who we named McLovin’. " 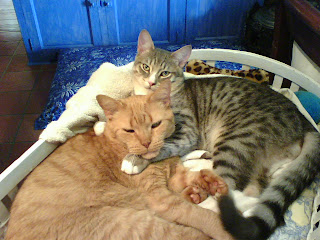 Morgan took McLovin’ under his wing and taught him everything he needed to know about being a cat. Morgan cleaned that kitten until we thought he would be bald! They slept together, ate together and if they went outside with the dogs they kept close to each other. That was 4 years ago.

The night Morgan died he got into bed with me, looked out of the open window for a while, turned around stretched out his front leg and placed his paw on my hand. His breathing had become labored so I called my daughter to come into my bedroom. Morgan died a few minutes later. He died with great dignity and on his own terms. I like to think his spirit went out of the open window that night and he is somewhere happy, playing and maybe still watching over McLovin’.

With posting this memorial, our hearts break all over again for the loss of Morgan from the Earth. What a physically striking, huge purrsonality boy. Morgan was not extra sweet but he was very, very dear. May his family always feel his love, as he always will feel theirs. And perhaps McLovin' will be able to pass on the many lessons he learned from Morgan to yet another furbaby.  ~Venita
Posted by Venita at 10:37 AM

What a great looking cat. I'm so sorry for your loss. :(