Scraps Left with Many Hearts in Tow


I took Scraps home from the hospital last night with a plethora of medications. We went to my dad's house, where Scraps chased one last toy mouse, was excited to look out the window and the neighborhood, and purred in the laps of people who loved him. He slept in bed with me last night.

This morning when we woke up, Scraps' decline was so fast and dramatic I knew it was time to help him take off his cat suit. He passed peacefully with the help of a vet this morning at approximately 11am.

Thank you from the bottom of my heart for all of your kind, selfless, anonymous donations. Many of you never met Scraps, but found it in your heart to donate to his cause. He was the most angelic, considerate animal I have ever met. Constantly seeking attention and affection. He was always patient and kind. Let me give him his daily insulin shots and test his blood sugar constantly with no complaints.

My heart is broken, but I have no regrets about the small fortune I spent over the last week to give him his last fighting chance. I didn't want to look back and think we could have done more. We did all of the ultrasounds and tests and overnight stays we could. At the end, both he and I were happy to have one last peaceful night together.

Again, thank you for your emotional and monetary support. It is so good to know how loved Mr. Scraps was. 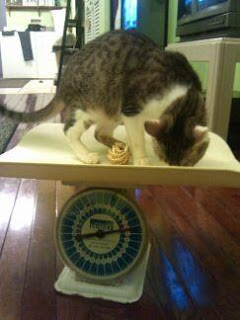 October 24, 2012--Sweet little boy Mr. Scraps is up to 6.2 pounds!! He has more than doubled his weight since his Mom brought him home in August. Scraps still has plenty of medical issues and can use any donations or sponsorships that come his way.

August 24, 2012--Mr. Scraps has many Angels in the animal rescue world, but there are two in particular--the foster Moms who saved him from a shelter death and who are caring for his multiple medical needs.

Mr. Scraps has a serious "failure to thrive" condition. His original folks dropped him at a shelter because they could no longer deal with it. At eighteen months, Mr. Scraps is only three pounds, and has diabetes, anemia, maybe IBD and pancreatitis, and who knows what else given his completely out-of-whack blood values.

Mr. Scraps is on Lantus insulin and his current foster Mom, Molly, is receiving dosing advice on Diabetic Cat Help. Scraps also is on other medications. DCIN's general fund is helping with Scraps's diabetes testing equipment and half the cost of his first box of insulin. We are setting up a separate account for Mr. Scraps's ongoing costs (and trust me, the vetting costs have been quite high). The shelter for which through which Scraps is being fostered is not paying the vetting cost because it does not have the financing to support the care that Scraps needs.

Please help DCIN help Mr. Scraps. PayPal buttons are below. Once he is well enough to be adopted, DCIN will add Mr. Scraps to its rehoming program. So, if you fall in love, please keep an eye out for his "ready to go" announcement. ~Venita

Since my help was not needed for Snow, here's a little for Scraps...

Just to clarify, the shelter is not of the position that he SHOULD be put to sleep. This is an open admission urban shelter that takes in 12,000 animals a year and is seriously underfunded. They just can't afford to treat animals with chronic conditions. They are THRILLED that Molly is willing to treat Scraps and gave us all the donated diabetic food they had in stock.

I understand what you are saying and I have changed the working a bit, Pseudogirl. But the point, however one spins it, is that if the two foster Moms weren't taking the financial burden on themselves, and if care were left only to the shelter, we wouldn't be here talking about Scraps.