September 16. 2012--It is with a profound feeling of betrayal I announce that Slater's temporary foster Mom returned him to the Warwick Animal Shelter. Shelly did not inform us of her action for more than 24 hours, and she did not have DCIN's permission to take that action. Extremely dismayed, we attempted to retrieve Slater from the shelter but were told by the shelter's adoption coordinator that because DCIN returned Slater, the shelter was free to adopt him out and had already done so.

We do not know the reasons for Shelly's action because she will not return our phone calls, emails, or Facebook messages. This is the only communication we had from her:"Brought slater in to shelter to see vet for another opinion on his extreme stress and his fitness to travel. Shelter vet advised he is not fit to travel, emailed his info to another vet and was told with his extreme stress it would be inhumane to transport him. Since he cannot be transported safely I turned him back into the shelter."

When Slater first got to Shelly, she reported that he seemed in the best of health and that he was "...a lovely boy here. I've only had him here a few days and I'm falling in love with him." Shelly had been delaying sending Slater to the forever home DCIN had found for him, saying that he was "not feeling well" and describing symptoms of Pancreatitis. Understandably, we did not want to transport Slater if he was ill, but we found it strange that Shelly was reluctant to return him to the vet for evaluation, and when she finally did, the vet performed no diagnostics or treatment except to perform an exam and deem him to be "stressed."

I spoke with the shelter's adoption coordinator. She told me that Shelly had claimed that her vet said that "Slater would die on the plane" if he were flown because he gets stressed on a car ride. When I spoke to Shelly's vet the day after she saw Slater, the vet did not express any concerns about transporting him.

The adoption coordinator told me that the shelter had no obligation to inform me of Slater's surrender because Shelly was "an official representative" of DCIN. I disagree with that because it was my name and phone number on the original paperwork that signed Slater out of the shelter even if it was Shelly's signature "for DCIN." The shelter people know Shelly and knew what Shelly's role was in this situation. Shelly is not and never will be an official DCIN representative.

I have an idea what was happening here, especially because the adoption coordinator told me that she had always wanted to adopt Slater to the person to whom he is now being sent. However, that person was on vacation when Slater came into the shelter. She also denied that Slater was ever at risk for destruction, although we have an "introductory" email from Shelly, telling us what she had been told by the adoption coordinator: "The shelter manager gave her a week to try to find a place for him since the shelter is so full." I received the same message from the shelter director on the day I called her to pull Slater from the shelter.

We wish Slater the best on the next part of his journey here on Earth. We hope he is not ill, as Shelly had told us, and going untreated for Pancreatitis, the symptoms she described. DCIN will never again assist with any cases brought to us by Shelly or this shelter.

DCIN also will contact all persons who donated to the chip-in for Slater's care and transport about refunds of their donations. ~Venita, DCIN Founder and Director

September 4, 2012--Im be flying home to my new Mom in a couple days. Not many cats getz to fly, so I'm cited bout that. My foster Mom sez I'm better behaved than most of her jerky brood. I dint know we were jerky. Im eating good and lovin bein away from the shelter. And I luvs havin a name. Thanks you all for findin me a home. I'll letz you no howz it goez. ~SLATER!!

August 29, 2012:   Now named Slater, this sweet boy is heading home soon.  He is currently in a temporary foster home, getting some vetting done and he will be heading to his new home very soon.

Can you help us get him there?


Found in someone's backyard, brought to the shelter for his own safety.  Shelter staff called all area clinics and groomers hoping to find his home, but they could not.  Bloodwork shows he is diabetic.  He is about 8 or 9 years old, solid grey and very sweet.

Blood sugars have been in the 300 range, he's on canned food only, no insulin. 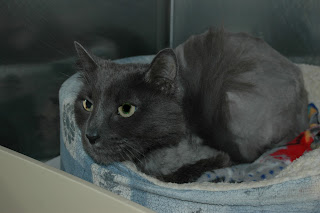 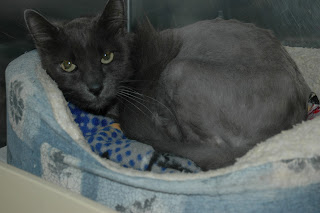