August 10, 2012--As the games wind down, MIKEY! bring you these final photos of his exciting stay in London with the US (and other) Olympic teams.


After Thursday's events, Team USA's medal standing are 39 Gold, 25 Silver, and 26 Bronze. A total of 90 medals. For now Team USA leads in each medal category and in total medals! U-S-A! U-S-A!

August 7, 2012--I loves the gymnastics and I loves the water. Put those together and what do ya get? Diving!! There are three medal events in diving during this final week of the Olympics, including today's Men's 3m Springboard.

But you can really knock the socks off diving by adding awesome heights and sublime synchronicity. The American Men's 10m platform pair of Nick McCrory and Dave Boudia knocked my socks off during their dives last Monday, leading to their winning a Bronze medal. Of course, to get the full effect of their feat, I had to join them at the top of that 3 story tower. Yep, I was a bit of a scardey cat up there, but it really gave me the bird's eye view of the action.

August 6, 2012--It was a weekend I couldn't stop moving. These Olympics are awe inspiring, but they also are tiring. I may just have to start taking some cat naps to rest.

Swimming pretty much finished on Saturday. My new water friends Mikey Phelps, Missy Franklin, Ryan Lochte, and Allison Schmidt are going to be setting off the metal (medal?) detectors big time at airports on their way home with 21 medals among them.

I do want to congratulate the Brits for their fine showings this weekend, especially in the rowing and sailing events. Is true--Ben Ainslie is Britain's greatest sailor since Admiral Lord Nelson.

Artistic Gymnastics is winding down. Just a few more medal events to go. I want to share a few  photos of my time with McKayla Maroney of the US Women's Team. Not only did she win a Gold in the Team's All-Around event, she won an individual Silver in the vaulting event. While some people say that her "imperfect landings" lost her the vaulting Gold, I say that Mickey (my nickname for her) is perfect in every way. (She's pretty too, isn't she?)

After Sunday's events, Team USA's medal standing are 28 Gold, 14 Silver, and 18 Bronze. A total of 60 medals, just one behind the first-place Chinese team.


August 4, 2012--My favorite thing in London besides the double-decker buses? The water ladies. I think several of them will be crazy cat ladies in the future--now that they have met the lovable tabby MIKEY!

I spent some of Wednesday in the pool with the women's water polo team. Although Maggie is getting all the press, my best friends (shhh!) from the team are Kelly and Betsy. I help them with their plays, and they scritch on me when we rest on the bench. The Team USA ladies told me that my help with practices was a big reason they wrapped up the preliminary round with a win over China. Watch my water polo ladies--all of them--in the upcoming knock-out quarterfinal rounds.

Besides the women's water polo team (*smile*), I also have been practicing with the synchronized swimming duet of Mary and Mariya (*bigger smile*). Sadly, the full US team did not qualify for the London Olympics. But several of them are here in London to cheer on my M'nMs, and they took to the water to splash around with me on Friday. M'nM's competitions start on Sunday.


Here's my M'nM's in a YouTube video. It was taken by "PopSugarTV." As an extra-sweet cat, I thinks that was spot-on. 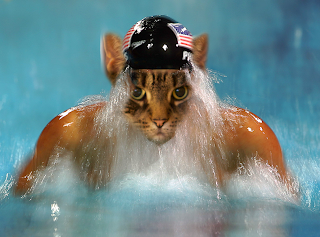 ***********************************************************************************
July 29, 2012--What an AWESOME Saturday it was in London, but before I tell you about that, I want to apologize for not telling you the truth about being at the opening ceremonies. I was there, arriving on David Beckham's shoulder on the boat with the torch. I didn't want to steal Sir Paul's thunder by singing with him as my Dad had arranged, so I made up the story about falling asleep on the plane. There were no cat naps for this Mister MIKEY! I was way too excited about getting to London.
Saturday was my planned travel recovery day. I watched some archery and weightlifting, and checked out some of the eye candy at the Aquatics Center (or Centre, as the Brits spell it). I am looking forward to the synchronized (synchronised) swimming next week. Congratulations to the 38 participants/teams from 19 countries who have won medals so far. I loved watching the US Archery team win the first US medal, a Silver. The South Korean team was stunning in the semi-final match. Sorry about the loss, Mr. Phelps. Maybe being the bad boy of the games isn't such an honor, eh?