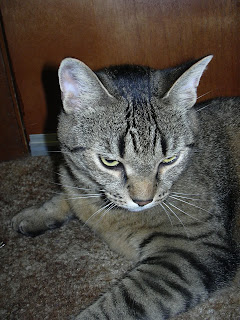 October 8, 2012--Received an email update from Charlie's new Mom...he has not had insulin since he left his previous owner. Charlie is a broken kitty with his latest BG at 98!


September 27, 2012--Slowly but surely Charlie is making his way home. We have raised all the money we need for his flight. He has been vetted. He (hopefully) is making his way to a few-days foster home this afternoon, and then it will be wheels up on his way to his new Mom.

September 21, 2012--Charlie has a new Mom waiting in the wings, ready to scoop him up from the airport as soon as we can get him there. Please help Charlie fly the friendly skies. 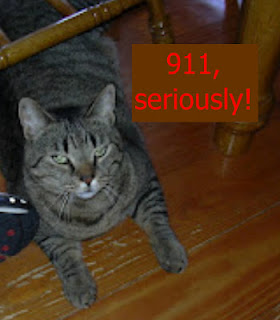 September 18, 2012-- Charlie's owner emailed me the following "The situation continues to get worse and it is becoming even more dangerous for my children.  If we can't find something soon, i will be forced to find a shelter for him, and at that point I will not be able to guaruntee he won't be euthanized."

September 10, 2012--Update from Charlie's dad says the 2 other cats on the home have now decided to pick on Charlie. They are fighting with him 2-3 times per day and it is just not fair for Charlie to have to live like this. Due to the limited space in the home, Charlie is not able to be separated from the others. Charlie's Dad thinks it's best to find him a new home ASAP. Charlie is still not being home tested but since receiving insulin he seems to be less lethargic and has no accidents outside the box!

July 11, 2012--Charlie was diagnosed with diabetes at the end of June, 2012. He is currently on 2u of Lantus every 12 hours. He is not being home tested. He is only 8 years old and about 12 pounds. He is FIV/FeLV negative. He loves sitting by windows and cuddling with humans. He lives with 3 other cats and gets along with them very well, however dogs make him a little nervous. He is also used to small children. His owners have schedules that do not allow Charlie to be treated properly for his diabetes. He desperately needs a new home that can give him the love, attention and proper care he deserves. Contact JennF@dcin.info for more info.