June 20, 2012:  Tigger was not responding well and the vet felt it was time to let this little fighter go and let him rest in peace.  He was helped across the bridge earlier today.


June 19, 2012:  We have the following update on Tigger: Tigger is eating well and he's making progress. [Vet tech] said that he purrs and plays with her when she goes back to check on him. He really is a sweet boy! She said that since that token dose of insulin [ProZinc] they have not given him any insulin at all. His diet is strictly DM and that is what they are currently feeding him. They are monitoring his levels and he is improving....She didn't have the actual dose of ProZinc given a few days back on hand but they are not giving any insulin since it caused problems for Tigger last week. So it seems like what Tigger needs is just a controlled diet and clearly living in the parking lot it was impossible to provide that for him.


June 15, 2012:  This sweet little man comes from the streets in Austin.  He is currently receiving medical attention and staying at the clinic, but once better he will be back on the streets.  He showed up at an apartment complex in February of this year, his ear is tipped which sometimes signals that a cat comes from a TNR colony of ferals community cats, [Trap, Neuter, Return] but Tigger is far from feral.

We are told he is a super affectionate loving kitty.  For a time he was with a group in Austin trying to find him a home but was returned to the parking lot on May 9th.  A few days ago the same person who found in February caught up with him and saw how skinny he'd become.  His back legs weak and he needed medical attention fast.  She brought him to the clinic where he is currently getting care, but it's believed that he could be easily managed on a canned food diet alone. 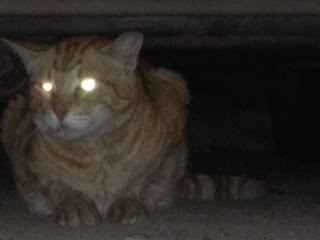 The photos we have now are from a few months ago in the lot, new photos will be sent to DCIN soon.  If anyone is interested in adopting this little man and giving him the gift of a comfortable home, please contact jennifer@dcin.info 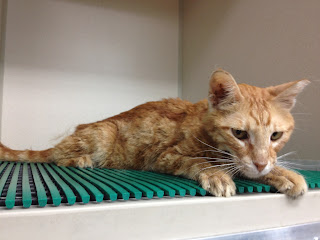 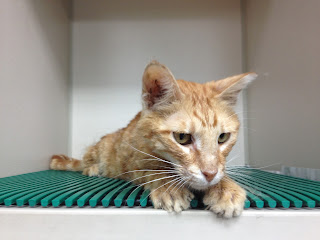 Edit to add: he was with the rescue group for a short time, they did try to find a home but when they could not, they returned him to the lot where they knew he was being fed in February.  We don't know who left him in February but right now a wonderful person is doing her best to try to find him a home and we are so thankful that she found DCIN and is allowing us to help. - Jennifer J.
Posted by Jennifer at 4:30 PM

How could a "group in Austin" toss him back out like that?! Crazy!?

That is promising if he has not needed insulin since that first shot..if he can be regulated on DM alone, that is awesome...I am praying he gets a forever home with tons of love very soon...I wish I could take him..but I have two special needs right now...one is 18 and the other is 16. I do not understand how he could get tossed back to the parking lot either..

Tigger, I send you love and all my hope for a peaceful journey to your next adventure.