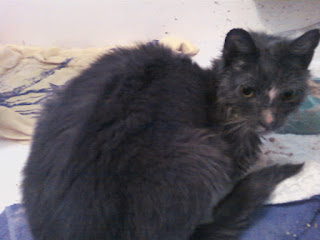 October 10, 2012--Joe has crossed the Rainbow bridge. Received this email from his caregiver this morning "... I have some bad news...Joe passed last weekend :(  He had the best week ever..started using the litter box and was really coming around and then Saturday morning he was flat down and not able to get up.  When you'd lift him up he wasn't able to walk and seemed very out of it.  He died peacefully the next afternoon. I'm absolutely heartbroken, devastated and confused??!! I cant believe this happened right when there was someone willing to take him in however if it were going to happen I'm very happy it happened when he was at "home" and comfortable."


September 28, 2012--From his caretaker "So Joe....we call him "Messy Marvin".  It's hard to explain his eating habit but its like watching a cat with no use of its tongue!  He puts his whole head in his bowl and shoves his food all around as he eats it.  He makes the biggest mess!!  He does the same with his water so you have to always have a towel under the bowl/dish because it gets all over the floor. I've started offering him dry food as well because he eats SO much food! So needless to say he has a great appetite!
I have a dog who isnt always cat friendly (to new cats) and several of my own so all my fosters are separated and since Joe takes extra time he lives in my bathroom and I hate to do that to any cat. He will not use a litterbox. He will however go pee and poop outside if you take him out! It's like having a puppy who you have to take out for a walk. He loves it outside! My mom takes him for me on the weekends so he can have some time out and about and she said he will use a pee pad at her house.  He is still on one unit BID. I have no doubt he would be fine to fly anywhere.  He is very mellow and not bothered by anything!  I dont mean to make it sound like he is a lot of trouble but for what I have to offer him I just know it isnt fair to him. I love this guy and we've been through hell together so I'd love for him to have a somewhat normal life again :)"


September 8, 2012--Poor Joe was mistakenly given too much insulin last month by the shelter staff that care for him and he ended up in a hypoglycemic coma. He was blind and having seizures. 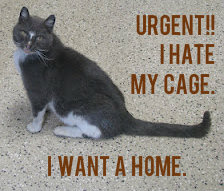 June 13, 2012-- Joe is a neutered male grey and white DSH less than 5 years old, that was found outdoors. He is FIV negative. He was labeled a "stray" but clearly is not. He loves to be inside, is a true lap cat, is a perfect patient at the vet, is laid back and very friendly. He is currently in a shelter in Montana. In May a shelter volunteer noticed odd behavior and was diagnosed with FD. He is currently on insulin but  his BG's are only tested occasionally. He is eating dry food, what ever brands are donated to the shelter. He has started to pull the hair from his feet which they think he is doing  because he is confined to a cage. He is very sweet and the shelter is no place for this handsome guy! If you are interested in giving Joe the loving home he deserves contact JennF@dcin.info
Posted by Jennifer F Alvarez at 12:20 AM

Is there any way for the shelter to be able to let him run around a bit.... we have a kitty at our shelter that has to be confined for 6 months due to an unknown animal bite, but we still let her run loose in intake when other kitties are caged.....