August 4, 2012--A couple who met Gus through our Facebook page, wrote about him on Facebook, and hoped to adopt him, told us that he will be going home soon, but not with them.


Gus is being placed with a local family on August 8th! They have five cats, live here in Champaign, and have experience with diabetic kitties! This is good news!

While we are a little sad we won't see Gus any more, we are thrilled beyond measure that he has a new forever home! We wish to thank everyone who has followed Gus's story and helped support him over the past 6 weeks! As a reminder, anyone who donated toward his care, please contact us if you need a receipt, we can have one sent to you from the clinic! This is a happy ending to an almost 2 year ordeal for handsome Gus! HOORAY!

Welcome home, Gus!! May you have many, many more years of love!! ~Venita 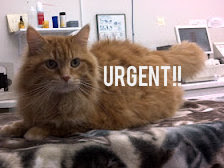 June 13, 2012: Located in the County of Champaign in IL, this very handsome little man named Gus is an 11 year old neutered male, he is FIV/FeLV negative. His owner passed away and he's been fostered at a clinic for a long time but after nearly two years there it's time he find a real home outside of the clinic.

We are told the following:

"He is a handsome, fluffy orange tabby who loves to be groomed and strut around after wards. He is affectionate, comical and playful. He is not declawed but will use a scratching post. He craves companionship, either in a nearby chair or on whichever desk is being used. In his former home, he was an indoor-outdoor cat who often socialized with another outdoor male cat his former owner fed. [unknown how he is with children] ... with my own two small dogs, he is cordial and holds his own. They often parade through the clinic together when I am here working late on charts. He does not hiss at other cats and has acclimated to a full ward before. Gus presented to our clinic with his owner in October, 2010 for an update of annual services. At that visit, marked weight loss was noted and ... laboratory testing... findings were consistent with non-ketotic diabetes mellitus. ...Initially we tried dietary management and oral ...glipizide at home. ... blood glucose remained elevated."

Lantus was started and for a time Gus did well, he was hospitalized at the clinic while they regulated his dose.  "During the following six months, Gus adjusted well to glargine, regained weight, and acclimated to clinic life."

Visited often by his owner and other family members while hospitalized, his owner was unable to take Gus home because of his own medical issues, he sadly had to leave Gus at the clinic and owner has since passed away.  Clinic agreed to let Gus stay until a home was found, but to date no home has been obtained. 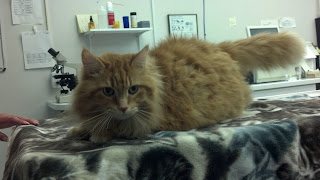 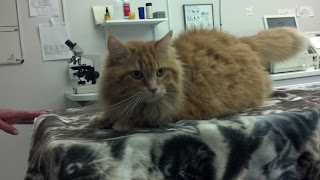 Gus is well maintained on 2 units of Lantus BID.  Blood sugar is generally under 150 mg/dl.  He eats a combination of wet and dry food prescription diet.

His vet says "It is my medical opinion that Gus is a well-managed, senior diabetic in good health. He will thrive in a home where he can enjoy individual attention and self-exercise. Please help us to make the best of his remaining nine lives. He is a wonderful cat!"

Please contact Jennifer@dcin.info for more infomration
Posted by Jennifer at 8:51 AM