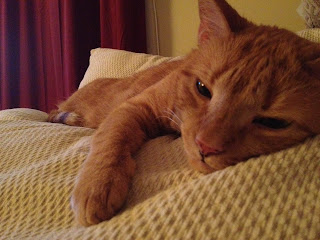 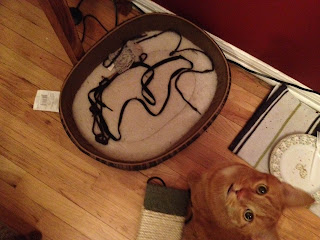 November 13, 2012--We have received the very best news on the planet for Yuri. He is going to stay home with his Mom. She has a new living situation and he now has a stable place with lots of support for Yuri's diabetes. We smile at this news and wish Mom and Yuri all the best as they continue down the path to forever together. There's no place like with Mom! ~Venita

June 2, 2012-- Take a lesson from big orange - stop and smell the roses! Yuri's Mom brought home some flowers from a work event and Yuri took the opportunity to enjoy them. After a few minutes of smelling he got a little more adventurous and tried to take a taste ;)

The cat is Yuri. I had hoped to adopt Yuri, but my orinch Casey said no. Casey was once attacked by a pair of foster cats, so he is not very welcoming to other adult cats. (Well, he wasn't very welcoming to my one-eyed baby Jackson either.)

How do I describe Yuri? The first impression is that he is a big boy. He doesn't wear his 17 lbs well. He could stand to lose 2-3 lbs and although I've been trying, there has been no weight loss yet. Yuri loves to eat, and on rare occasions, he convinces me to give him a bit more than the 6 oz of low-carb Fancy Feast I have been trying to hold him to every day. Yuri's love to eat is a problem here because I leave wet food out for my cats 24/7. (It's a hangover from having to feed Ennis, my diabetic that is now recently gone, every two hours, day and night.)

Yuri loves people. He head butts, and lap rubs, and naps on my husband's chest in the afternoon. When I sleep in the foster room with him, he is a major-league cuddle sleeper, pushing himself against my belly and snuggling my neck. Around 4am, he wakes me with love, but I can't say whether it is "love-love" or "food love."

He is a very active boy for his age. He has a favorite shoestring he plays with, and he also often visits Jackson's toy baskets, which are scattered throughout the house. Yuri had a disagreement one day with Jackson about which would be playing with the Nanner. If I hadn't intervened, I think Yuri would have won.

Yuri seems to be a committed diabetic. With work, one can keep his blood glucose levels below 180 (the renal threshold). If one lets him go without insulin, he can get to the high 300s or low 400w mg/dl. He has just had a dental so his breath and drool (yes he drools with petting) are no longer stinky. The vet extracted Yuri's two upper canines and two lower premolars. (There is nothing left to hold his tongue tip in his mouth.) The vet said that some of Yuri's lower molars may have to go within a few years. But that is not  unusual with a diabetic.

Yuri is an awesome cat. But, he is used to being an only cat. He got along fairly well with Spa Venita's recreation director Jackson. The difference in their size (17lbs v. 7 lbs) made wrestling time a bit rough for Jackson's taste. It is completely Casey's and my fault that we cannot adopt Yuri. Casey has the previous trauma, and I don't have the time or ability to make a proper introduction of Yuri to my crew.

But when Yuri and I are alone, as we are right now, he is a perfect cat. He loves to lay on my desk under the task lamps. Right now he is laying on the other office chair, head down, tongue out, and quietly snoring. What do you expect? It's 6am, the time when nocturnal animals start sleeping soundly and the birds start chirping. ~Venita

February 22, 2012: Located in New Jersey and after many years of love and support given to Yuri by his caregiver, sadly he needs a new home and his caregiver because of the amount of travel her job requires.

He's a handsome gentleman with a big frame weighing about 17 pounds. Diagnosed in July of 2009, he has no history of ketones but did have a hypoglycemic episode this month while the caretaker was traveling. He was on 2.5 Units of Levemir BID but the current dose is 1 Unit due to the hypo. He eats canned only for the past two years and has been home tested and does not mind the testing. He is in need of dental and DCIN is working on getting that done.

Mom says: Yuri is an extremely loving and sociable cat. He has been around all sorts of people his whole life and takes no time at all to get accustomed to new people and places. Since the owner moved around almost yearly, over the course of his life Yuri has lived with his owner in ~10 different homes. Each new home had several roommates or family members living there, so he is quite accustomed to changing faces. All former roommates of Yuri will vouch that he is quick to give his love and virtually always gets the same love in return! He doesn't hesitate to climb into your lap as you relax and watch TV or read a book, and will cuddle up with you on the couch whenever he gets the chance. Yuri usually sleeps with his owner in bed.  When she isn't home, he sleeps in the bathroom in a little cat bed for the night so he doesn't wake up his other roommates. When he goes to the vet he is relatively calm. Once he is let out of his carrying cage, he immediately begins exploring, and doesn't fight when the vet has to pick him up.


Over the course of Yuri’s life he has lived with several other cats and has had limited contact with dogs and children. Yuri has always gotten along with other cats, always the one to approach and play. I have found that the female cats he has lived with tend to be more hesitant to play with him, but they have had no problem cuddling up on the same bed or couch with him after they got used to one another. On the other hand, the male cats who Yuri has lived with have become immediate best friends – cuddling and licking one another like brothers! He has been noticeably defensive when he has encountered dogs, but he has never gotten the chance to cohabitate with one for an extended period of time, so I can’t speak to that. He has interacted with children with no problem (toddler age and above), but only on a limited basis. 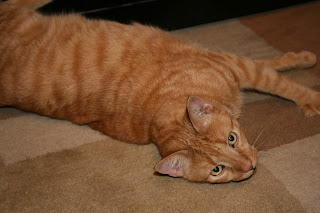 Yuri is truly a special cat – he is absolutely adored by all who meet him, and the love he is capable of giving is truly astonishing. He taught himself to play fetch with bouncy balls and his favorite string (which he has unconditionally been attached to for four years!). He is truly a fantastic companion. 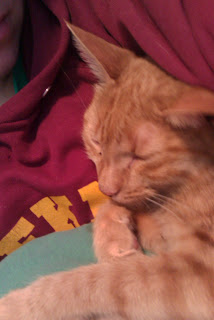 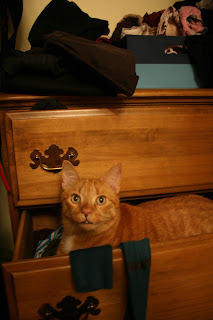 Yuri is one VERY special boy.I know someone will step up if we can get him out there.I will share his stories..lets get this guy a home!