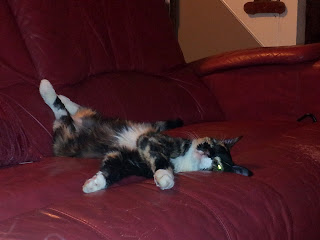 May 12, 2012--On April 27, 2012, Skeeter died at an emergency hospital in the arms of her new Mom. The ER vet suspected that the travel may have exacerbated cardiac disease secondary to her hyperthyroid. She also had acute kidney failure. We at DCIN feel that even if Skeeter had not traveled to her new Mom, these conditions would eventually have overtaken her frail body.

Fly free, beautiful Skeeter. Your body was too weak for this planet. We all miss you, but Jen the most,. She gave you such love and care in your final few weeks. We know Jen will be among those you wait for at the Bridge. ~Venita

April 25, 2012--Skeeter is now at the Boston airport waiting for her flight to Houston. She will have a second flight this afternoon to reach her new home. Safe flights, baby girl.

April 20, 2012--In a comment, Monica asked for an update on Skeeter. Skeeter is now well enough to travel to her new home in the Southern US. Her flight will be sometime in the next 10 days. We wish Skeeter a huge WELCOME HOME!! Jen fell in love with Skeeter and will miss her terribly. ~Venita

Skeeter seems to have finally turned a corner. She is starting to gain some weight and to exercise more. And even though she didn't win the Mega ball lottery, she is starting to truly appreciate the good life!

March 13, 2012--Skeeter was in the ER the weekend and then all day to her local vet yesterday because she is running a fever. 104 to 105 degrees. So far the treatments have been SubQ fluids and cold washcloths to cool her down. The local vet sent her home on Prednisolone because he believes it might be an inflammatory process. He drew blood for a chem panel and a CBC, and we will know this morning whether there is an infection or problems with internal organs. If there is an infection, she will start ABx. She is tentatively scheduled on Thursday for an abdominal ultrasound to see what is going on in there.

Jen also has stopped treating Skeeter with the Tapazole (for HyperT).

However, this morning foster Mom Jen tells me that she thinks Skeeter's fever is almost gone. Her ears are cold and she greeted Jen at the door with lots of meows just like usual.

These treatments have brought her vet bills to $1,000. If she has to have an ultrasound, that will be another $400.

Thank you so much to all the generous people who have been donating, and special thanks to all who have been sending her get well wishes.

Jen has given Kitty the wonderful new name of Skeeter, from the book/movie The Help.

DCIN planned to send Kitty to a long-term foster home in the lower Midwest later this week.

When Skeeter first got to Jen's house, after the owner gave Skeeter an insulin shot that morning, Skeeter's BG started going so low that foster Mom Jen and her partner Randy had to take Skeeter to the ER. She was released from ER care the same night, but once she got home her BG levels still were in the hypo level. By morning, Skeeter was in the 220s and we all agreed no more insulin for a couple of days.

Last night, March 5, Skeeter went to her local vet for a full workup. Skeeter looks so emaciated that the vet tech asked whether she was a stray. So sad. The vet says Skeeter is not well enough to travel, so Jen will be keeping her as long as it takes to get her well enough to travel. Proper nutrition and love goes a long way to bringing a cat back to health.

Jen has sent DCIN many photos, several of which we included here. Jen also posted these videos.

If someone would like to adopt Skeeter before she moves by air cargo to the lower Midwest, DCIN can certainly work on that. Just contact Skeeter's case manager at Venita@dcin.info.

DCIN had quite a bit of vetting done between the ER vet and the local vet. Almost $600. If you would like to contribute toward that cost, please chip-in below.

February 24, 2012--Kitty is at home with her Dad and her Dad's 3YO son. Mom has already moved out of state and diabetic Kitty cannot go with them. She will be surrendered to a kill shelter that we already know would destroy her. 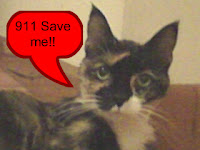 Kitty's folks are not giving her up because she is diabetic. They are giving her up because the Mom developed a rare medical condition that makes her allergic to many allergens, including cats. In fact, the household has a second, non-diabetic cat that will face the same fate if a new home can't be found.

Kitty is an 11 to 13 YO, medium hair, indoor, spayed female tortie. She has lived for three years with another cat. Relations were cold (no fighting, just keeping distance) for about two years, but now they have worked out her differences. Kitty has lived with dogs, and we are trying to get information about how she did with them. Kitty does grandly with children. I was told she likes to watch TV. From the Mom:


This cat has been my beloved companion since I was a teenager. She used to curl up over my head like a nice fluffy hat while I slept, she graciously accepted being kicked out of my bedroom permanently when I got pregnant, she refused to harm my baby in any way no matter how hard he pulled on her tail, and she's always been so affectionate (purrrr; rubs against leg).

Kitty was diagnosed diabetic less than a year ago. She has no history of DKA, but she has had two hypo events. The Dad, a diabetic himself, said that she had a glassy-eyed appearance and he treated at home with corn syrup. The Dad shares his Lantus with Kitty and she is getting 2.5U BID. She is not being home-tested because the Dad doesn't have extra strips, but DCIN will be helping by sending the Dad a glucometer, strips, and lancets just for Kitty.

Kitty has no current clinical symptoms of diabetes. In the past, PD and weight loss; that is why she went to the vet that diagnosed her. She has not yet put back on all of her lost weight. Kitty is currently eating a combo of dry foods--Meow Mix hairball control and a Friskees product.

Mom and Dad say that Kitty has no health problems other than diabetes, but Kitty hasn't been to the vet for a regular check-up. She's middle aged, and we know that middle-aged diabetic kitties often need a dental procedure. Kitty will occasionally poop right next to a clean litter box. DCIN will have Kitty tested for FIV/FeLV and get her vaccinations up-to-date before she travels to a foster or permanent home. Email her case manager at Venita@dcin.info.
Posted by Venita at 9:13 AM

I had no idea Skeeter had passed. I'm so very sorry. Skeeter, I hope you now are running strong and free.