God speed and Angel wings Autumn. At 11:15 am this morning we set Autumn free of her failing body. Yesterday she stopped eating, she started isolating herself away from us and her furry family. Then she became listless and barely responsive although she would still give us kisses and purr when we would hold her or pet her. All her vitals were fine and she had no ketones. When she had all her teeth pulled in August we knew she had the start of kidney failure that had since progressed to where treating it would only be keeping her alive for us and buying us a little more time together. So we released her to go run and play at the Bridge....Our hearts are shattered but our girl is free from her failing body. 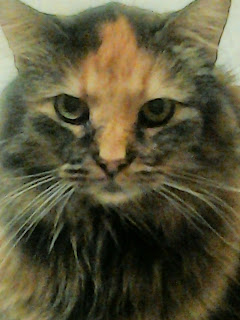 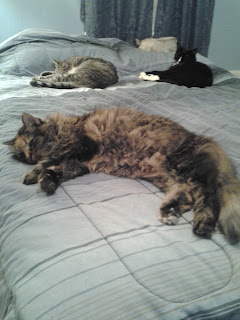 "Thought she was going to go OTJ for me as I had her down to a fat zero for a dose after discovering that she reacts to rice and beef. However, she decided that she will only eat Friskies like the rest of the family which sent her numbers back up. But other than that she is doing great. I've attached a couple new pictures of her so you can see how pretty she is now.

After over a year of trying to convince her that she was allowed on our bed, she finally gets it and spent her first night sleeping with us last night. (happy dance). She also has the most fantastic purr! She doesn't really purr, she coos. She sounds just like a dove. Which has earned her the nickname of Love Dove among others. lol

December 10, 2012--Update from Autumn's mom.."She continues to do extremely well and her dose just keeps getting lower and lower. Right now she is on .4u and I suspect that will be going down again shortly as well."

August 21, 2012--Mel sent updated photos of Autumn and writes... "I took these of Autumn this morning as she was sitting in our kitchen window above the sink talking to her buddies the cardinals. We have a nest of them in the bushes just outside that window and she loves to lay up there and watch them for hours. Now mind you that window is high enough that at 5'5" I can't reach it to open it without climbing on the counter...lol So obviously she has no problem jumping on anything now." 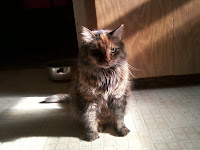 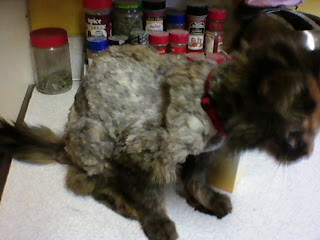 May 8, 2012--Mel wrote us yesterday. "Well Autumn is very nekkid and how painfully thin she is now very apparent...I thought Maxwell was a walking skeleton when he arrived, he looked rotund compared to Ms Autumn. But on the upside she now weighs 6.5 lbs so she is gaining. She did have fleas, so I just went ahead and had them give her a Frontline treatment there before bringing her home....She is one unhappy girl this evening, but surprisingly I tested her when she got home and after spending all day at the vet's office and being sedated and shaved and then waking up pissed off...she only tested at 313 at +10.

So all in all she is doing well, she is out and about with all the other cats, and now waits in the kitchen with them while I'm fixing their meals. She does still growl at them if they get too close but even that seems to have lessened since she came home from being shaved, she is still clearly unhappy about the vet visit, but she'll get over it"

May 2, 2011--Lulu had an uneventful ground transport from MN to NE. Thanks so much to all who participated!! You are AWESOME!!

Lulu is now Autumn, named for her colors. She has been doing very well in her new home. This is part of Mel's update this morning.


Other than needing to be shaved she is doing great here. She is still testing negative for ketones, she feels heavier already when I pick her up, and she is well hydrated as far as I can tell, her skin snaps back easily. She is eating her Friskies really well and eating a lot of it, I'm free feeding her, as soon as her bowl is empty I give her more. She is packing in about 2 to 3 cans per day. And in general looking much better, her little ears are starting to feel like ears again, when she first got here they felt like leather she was so dehydrated and they were very warm. Now they feel like ears again, and most days are cool to the touch unless she has been laying in the sun.


She is starting to get friendly to the rest of the critters here, she will still hiss at them if they get too close, but she isn't running to hide anymore she will just lay on her bed and watch them.

April 27, 2012-- DCIN has Lulu vetted yesterday in advance of her transport to NE. There was bad news and good news.

The bad news--after 10 months without treatment for her diabetes, Lulu's BG level was 539 and her ketones were moderate. We had the vet give her SubQ saline and a unit of ProZinc. She is very skinny, weighing less than 6 pounds. She also is very matted. DCIN has sent fluids for Mel to give Lulu. We also sent a new glucometer, test strips, and KetoDiastix. Mel, who was reassured she was not getting a nekked kitty, will be shaving Lulu once she gets home.

The good news--Lulu's organs don't appear too damaged at this time. Her BUN was a touch over the high end of normal, but her creatinine is mid-range normal. Her ALT is a little high. Her electrolytes are close to normal. For a diabetic cat untreated as long as Lulu has been untreated, she is very healthy.

The vet said Lulu was a touch anemic, but I am not sure what out-of-range blood value led her to say that. But, just in case, DCIN is sending Pet Tinic to Mel. The vet also wants to start Lulu on Clavamox, an unreconstituted bottle of which is traveling with Lulu to Mel to start tomorrow. DCIN also got Lulu a rabies shot and a microchip.

Bottom line--Lulu is a sick baby, but with proper nutrition and veterinary care, and the oodles of love she will receive from Mel, Jon, and the furbabies, we are very hopeful she will be a success story.

Lulu's vetting cost DCIN $415. I am adding that amount to the chip-in on the Transport Hat Trick  page. Please help DCIN help Lulu and the other babies that are moving this week.~Venita

February 27, 2012-- I received photos of "Lulu" from her owner with a handwritten note on the back stating "Boo Boo spayed, declawed, a good mouser, in or out doors, I live on a farm and she loves the sunshine." So "Lulu" is aka "Boo Boo." She is still not being treated for her diabetes and her owner is feeding her a diet of both wet and dry food. She desperately needs to find a new home so her diabetes can be treated. Her owner stated "She is such a lovely cat, I hate to put her down".

January 31, 2012--Lulu (actually "Boo Boo") is currently not being properly treated for her diabetes. Please help her out by taking her into your home. She is a 5 year old female torti. She is a tiny girl weighing less than 10 lbs.

Her owner has health issues and is not able to give Lulu insulin injections. She is also not being home tested. Her owner was attempting to feed her wet food only but Lulu likes her kibble, so she is being fed both wet and dry food.

Lulu was diagnosed about 7 months ago. She is spayed and in good health other than FD. She is friendly but can be "shy" at times. Lulu is front declawed and good with kids and dogs. Even though she is front declawed she does enjoy venturing outdoors.