Angel at Home in Cental KS 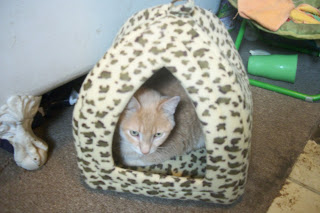 December 31, 2012~ Angel is enjoying the new bed he received for Christmas. Isn't he adorable?! He looks so snug in there. Such a beautiful orinch kitty!

Missi works hard raising money for needy animals through her many Love Auctions and other efforts. Her family works hard to take care of Angel, but January is a very difficult month for them.

We have started a chip-in for Angel to raise funds to help pay for his insulin, syringes, and testing supplies. We are hoping to help one of our biggest supporters. Thank you everyone so much for your generous donations. Your dollars go directly to cats in need such as the very handsome Angel. ~Céline

(Chip-in closed down, and we have removed the widget.)

April 23, 2012--For the past two weeks, Mikey, the DCIN FUNraising spokescat, has been running a naffle for a kitty blanket made by Missi and her daughter Jerilee. Mikey pulled the winner this morning--FDMB's Lisa and Merlyn. The "secret cat" Mikey held the FUNraiser to help is Angel, Missi and Jerilee's diabetic kitty. Congratulations Lisa and congratulations Angel!! ~Venita 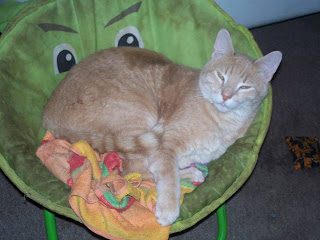 March 12, 2012~Angel's momma Melissa has been working very hard with her ginger baby to keep him healthy and happy. Although he is still on insulin his numbers have improved considerably. Look at how relaxed he looks in his favourite Shrek chair :)

Unfortunately, the economy has been very difficult on Angel's family and has left them looking for work to support their family. Melissa has been a huge supporter of DCIN ever since Angel joined our family last October. She has run several Love Auctions that have raised much needed funds for several DCIN kitties and has also donated Lantus to us when we were in need. Her 5 year old daughter also started Jerilee's Crafts for Critters where she makes crafts and has donated proceeds to help diabetic kitties. They are a family with big hearts that have fallen on hard times.

DCIN is currently looking for monthly supporters who can help Melissa and Angel while they go through this difficult time. Your monthly support would help ensure that Angel's belly is full of Fancy Feast, his litter box remains filled with clean litter and he has supplies to keep his diabetes regulated. Any amount would help. Thank you. ~Céline 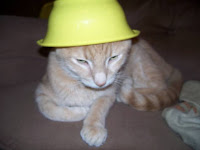 October 27, 2011--Meet Angel...apparently he is quite the character. He is a very handsome orange kitty living at home with his family.

DCIN is helping Angel and his amazing mom by sending them testing supplies to keep this little beauty safe.

Angel's mom has been working very hard to regulate Angel's diabetes and it is paying off. Angel is feeling a lot better and is currently on whiffs of insulin :) ~Céline
Posted by KittyPaws at 8:22 PM