Sandy in DCIN Foster is ADOPTED! She is now Sarjenka!

August 17, 2014-- Well, its about time this blog was updated! Our favorite torti girl, Sandy, has been in her new home since June 2nd, and has a new name to go with her new life. She is now Sarjenka.  She has had a hard time trusting her kitty brother after all the cat drama in her foster home, and there is sometimes screaming, but Bear handles it with aplomb. Sarjenka knows he won't hurt her and there have been no injuries.

She is very comfortable with her new mom, and was cuddling and giving kitty kisses from the second day. Sarjenka loves to play with catnip pillows, and toy mice.  She still likes to hang out in her safe room (the walk in closet) at times, but is out in the main room a lot more, and sleeps by her Mom's head, purring of course! 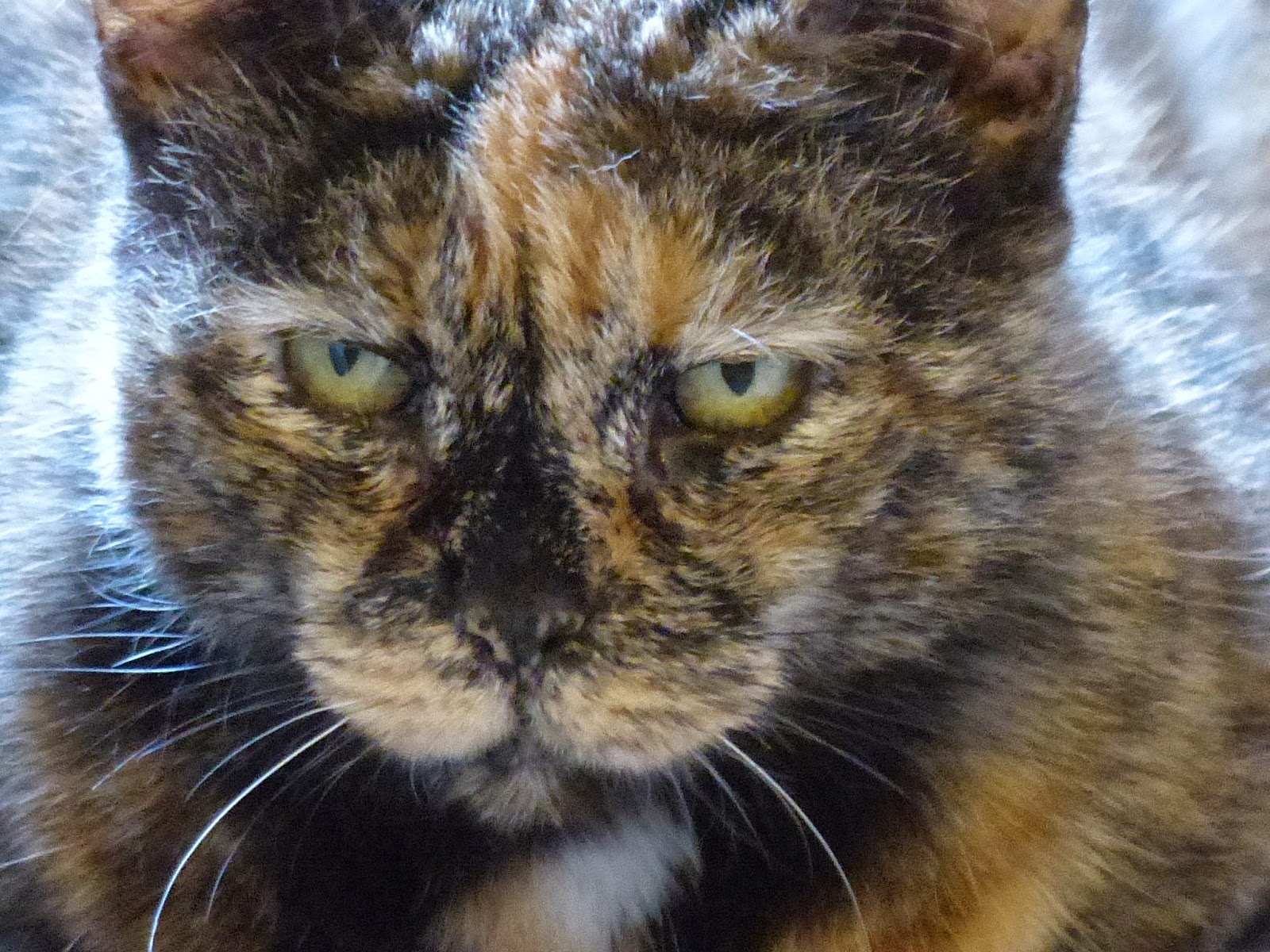 November 23, 2013--Sandy's foster home situation has improved, and she is now much friendlier and relaxed with her foster Mom. The foster Mom temporarily re-homed her resident cat that was being aggressive toward Sandy. We now see that Sandy is a personable girl and that she gets along with non-aggressive cats. We will continue to monitor the situation, but this now makes it even more important that DCIN find Sandy her own home...so that the foster Mom can bring her resident kitty back home.

Sandy, a classic tortoishell, is maybe four years old now (found by her original family as a stray) and lives in DCIN foster care in coastal VA. Sandy has been in DCIN foster care for about 18 months. Sandy's original family didn't want her because she turned diabetic (induced by steroids given for an ear inflammation) and Sandy's diabetes needed more attention than they cared to give because they had a new baby. Sandy hasn't required insulin since she's been in DCIN's care. Sandy has been in DCIN foster care in two different homes for almost 18 months. She gets overlooked, we think, because she is a "plain Jane" that doesn't smile in her photos and because she can be easily intimidated by strong-willed kittehs. In her present home she stays in her own room because another kitty is aggressive towards her and growls, hisses, claws, and arches his back anytime her door is opened. Sandy "no longer runs in terror when I come in if he is by the door, but looks out at him curiously." But a quiet home with few, friendly kittehs might be just the ticket for Miss Sandy. Following is a gallery of new photos of Sandy that we will grow as the month progresses. 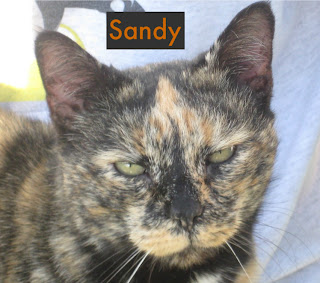 March 24, 2013--Sandy was moved to a new foster home but one of the resident cats does not like her too much. Her current foster mom writes this about Sandy "Sandy is doing well. Her previous stomach issues cleared up with some diet change (I am not sure any FF canned will agree with her). She is still by herself in the room because Zeus still just really hates her, and Toby who loves her is very sick and I don't want him exposing her to anything. I feel bad she's isolated because she has come out of her shell and gotten really friendly and sweet. She rolls over for belly rubs and purrs when someone comes in her room. I will try to get you some photos soon too. She doesn't photograph well indoors but I'm thinking about taking her on the deck on a cat leash on a nice sunny day. I love Sandy but she isn't integrating well with my butthead Balinese cat, so if someone else out there would love a sweet cuddly torti friend to sit in their lap when they read or use the laptop, I hope they find her. I feel so bad she still isn't out of my foster room with space to roam. :( **********************************************************************************************************
January 3, 2013--On January 5, Sandy will start her ground transport to a new DCIN foster home in Southeast Virginia. It is a wonderful home where she will get more personalized attention. The new foster Mom already is in contact with Beth, DCIN's behavior consultant, planning for Sandy's socialization to her new family--people and kitties. We are starting a vetting fund for Sandy, should you care to donate. (Removed Chip-in widget.) 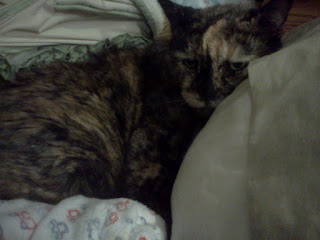 January 7, 2011--DCIN has changed Sandy's case management from Carl to Venita. In going through emails, I see that Sandy is presently an only and her family doesn't know how she might do with other pets. Sandy is not happy with the new baby, but her family let us know that Sandy is no longer getting the amount of attention she did before the baby. Sandy saw the vet on December 14, and Sandy's Mom gave us this report:


Sandy has stopped drinking/urinating so much, and has actually GAINED weight. The Dr. was baffled and thinks perhaps Sandy was borderline diabetic and when she received a steroid shot weeks ago for an ear infection and that may have triggered the diabetes. Unfortunately her bladder was empty so we couldn't get a reading. I am going to try and collect a sample, but if not I will take her back to the vet for them to try again.

December 11, 2011-- Sandy in Lake Katrine, NY needs a new home ASAP! Sandy is a 3 year-old spayed female recently diagnosed with diabetes. Sandy is a former stray taken in by a young couple who just had a new baby. Since that time, Sandy has been doing poorly, and last week she went to the vet who ran a blood panel showing a blood glucose level of 661! No other conditions or complications were noted at diagnosis. Tests for ketones were negative at that time, but blood sugar is critically high. 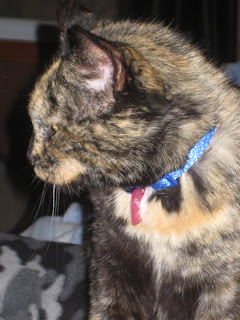 DCIN received an anonymous email alerting us to a flyer posted asking for a new home for Sandy. At this time, she is not receiving any insulin. Sandy's family would like to find her a new home as soon as possible. She has been switched to a low-carb diet of canned Fancy Feast classics recommended by DCIN. A follow-up visit to the vet is scheduled for this week. Information will be updated as it becomes available. 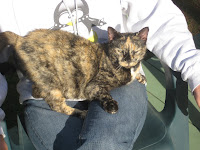 Please help! Sandy's case manager is Venita at Venita@dcin.info.
Posted by Venita at 2:42 AM