June 3, 2012--To celebrate her adoption of Oscar, Carolyn took and sent several photos of him. 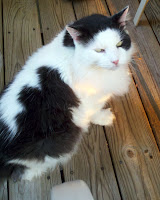 March 19, 2012: A view from sweet Oscar's dental procedure today and an update.
From his foster mom:  Oscar has stomatitis. 1 of the 2 teeth he lost was an abscessed canine, very deep pocket.. must have been very painful for the boy. Dr. T said the clindamycin has been very helpful in the 4 days he's been on it for reducing the red bleeding mass in the back of his mouth, which turns out to be caused by stomatitis - and there's one on each side of his mouth. He has some sort of mucus buildup in his throat, not sure where that originates.. He's on bupe, clindamycin and orbax for the time being, with a recheck Friday. Dr T said his ear culture came back clear. His pain is caused by inflammation and maybe a deeper infection than can be cultured. He's a heavy wax producer, which has been looking like infection all along. And it was, at one point, but that's gone now. Now for the fun and cool stuff... [the clinic] have a brand new, sparkly cold laser therapy setup! They used it today on Oscar, and he will be getting followup treatments because this machine actually has a setting for stomatitis! How cool is that?"


March 15, 2012:   Poor Oscar has some really bad teeth and a mass at the back of his gums.  He needs immediate attention and we've scheduled his procedure for this coming Monday.  He's on pain meds now and will need a nice recovery time with his wonderful foster mom.  We have started a chip in to help this little man feel better fast.  Thank you.


Oscar is settling in great! Purring, looking to be petted, out exploring his bedroom suite and playing with his very own Yeowww! lemon. He went under the bed for about 10 minutes, and came right out when I lifted up the bedskirt. Hasn't been back under there since.

Claudia did a great job with him, he's put on weight and looks very healthy. I'll try to get better lit pictures today but here are some from last night. 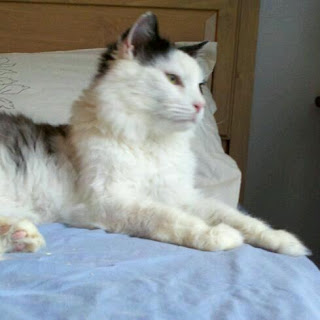 Oscar goes to the vet tomorrow to have his ears looked at. We're going to ask for a non-steroidal treatment. Oscar's insulin dose has been decreasing a lot since getting to Carolyn's, PS numbers in the mid-100s.

February 12, 2012:  Oscar moves to a new DCIN foster today.  We are forever thankful to Aunt Claudia for pulling him when he needed her and caring for him this long, and we look forward to learning even more about Oscar as Aunt Carolyn fosters him until we can find him his perfect forever home.


January 27, 2012--Oscar looks so much better now. He is a high dose kitty (5.5U Lantus), his tests for Acromegaly and Insulin Auto Antibodies were positive and negative, Acro he was positive, but on the low end of the scale, MSU is not convinced he is truly an acro cat. DCIN is soon moving him to a new foster home experienced with high-dose diabetic cats. Oscar's current foster Mom says he would prefer to be an only.

Please, before we go to the effort of a transport for Oscar, if you think you could give him a home and heart, let us know by contacting his case manager at Jennifer@dcin.info. December 24, 2011--Claudia heard that Oscar wasn't doing well at the shelter (on Glipizide), so she pulled him. DCIN paid for his vetting, and he will stay with Claudia, staring on insulin and perhaps on SubQ fluids over the holiday. We thought it was better to pull Oscar now than potentially pay for DKA care over the holiday.

December 13, 2011: Sweet Oscar is needs a home quickly. Well, maybe he doesn't look sweet now but imagine what a short time in a loving home would do. He's from the same shelter as FIV+ Buddy who's on his way to his forever home home on December 17, 2011.  Can we make a holiday wish come true for Oscar too?

Here's the details from his PetFinder page:
Oscar was brought to the shelter by someone who had a wishy washy story and said they found him as a stray. Oscar looks liked he crawled out of a garbage can but make no mistake this boy is no grouch. He is the BIGGEST LOVEBUG EVER !! ...He. was a horrific dirty matted messed of fleas and ticks and needed to be shaved. He is also declawed so he had no defenses for outdoors to take care of himself. Now for the bad news...Oscar was drinking a lot of water and the vet has confirmed he is diabetic and needs insulin. The shelter is not staffed to provide this type of care and monitoring. Even though Oscar looks like a decrepid old mess, the vets says he is only about 8 years old and healthy otherwise. PLEASE THIS IS URGENT PLEASE CROSSPOST TO HELP SAVE OSCAR. Oscar is neutered and he got his shots updated the other day at the vet and is FIV/FELV negative. Volunteers are willing to transport just about anywhere to save this boy. Maybe there is someone out there already with a diabetic cat that can take in Oscar too??? Once he's all cleaned up and his fur grows back he is going to be so handsome. Of course I already think he's purrfect now :-) Email kcammack1@yahoo.com for fastest response. Thanks!

I brought in a stray like this and he became the most loving being I've ever seen. Complete turn-around. Like an angel. He just needs a chance and some love for a change. You won't be sorry.

I brought in a stray like this and he became the most loving being I've ever seen. Complete turn-around. Like an angel. He just needs a chance and some love for a change. You won't be sorry.