January 9, 2012--We have not heard from Mimi's beans in a while, so we believe they must be successfully treating Mimi. We are removing her from the Kitties with Diabetes Store listing. ~Venita

(In March 2012, Mimi's Dad wrote: "I just wanted to check in and thank you again for all the help you gave us last year with Mimi. Thanks to your help, and the change in her food to Fancy Feast Classics, I am very happy to report that Mimi has been in complete remission for many months now. She has gotten over her irritability and other issues become a very sweet and friendly kitty who is a joy to have around, and very easy to manage. I don't know how we would have worked this out without the information and support you were able to provide.)

November 23, 2011--DCIN has had Mimi as a 911-At Risk for a few weeks because her family said that she was becoming difficult to dose with insulin. However, last weekend Claudia visited with the family and gave them some tips and tricks that hopefully will make testing and dosing easier. Mimi's family is willing to give it a new try. For the time being, we are putting Mimi back to a "normal" adoptable. 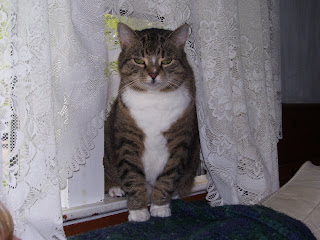 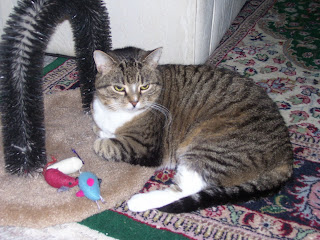 September 26, 2011: Mimi, a domestic shorthair tiger kitty is just 5 years young. She’s spayed and FIV/FeLV negative. Up to date on vaccines and has been at her current home for about 7 months.
Diagnosed in September of this year, she is a very nice cat but not a lap cat. She will follow you around the house and wants to be with you, just not handled a lot, sort of a typical kitty. She’s indoor only but does go outside for a few minutes with superivision.
Currently on Lantus 2 Units twice per day, she is not hometested and eats Royal Canin vet diet dry food.
Owners were looking to find her a home before the diagnosis, she was not getting along with one of the cats in the home. As they were looking for a new home, she was dx with diabetes. Owner says Mimi would be a good kitty for a quiet home environment.
Posted by Jennifer at 2:52 PM