Clancy Romancy--at home with his dad

March 19, 2012: DCIN had closed this case as we had no contact with his dad but we are happy to say that we have heard Clancy is back home and living in a small trailer with dad and three other kitties.


February 21, 2012--We have been unable to contact Clancy's Dad. Sadly, without knowing where or how Clancy is at this time, we are closing his case. ~Venita 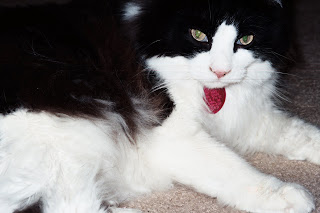 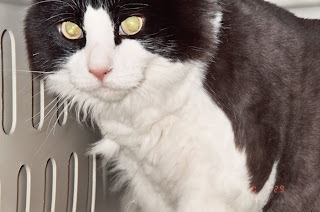 October 10, 2011: Sweet Clancy Romancy is still being boarded, dad is trying very hard to find a new home so that he can be reunited with Clancy. If you can foster or help with boarding costs, please let us know.

September 14, 2011: Clancy is a black and white long-haired cat, weighing around 15 pounds. He was rescued in east St. Paul as a kitten, member of a family of feral cats living near the owner's apartment complex. He’s neutered, has a very friendly and gentle demeanor to those he trusts; he’s a lover and not a fighter.

Clancy has had to be boarded for the past five months because during a random fire inspection of the owner's apartment complex the manager saw that Clancy had missed his litterbox a few times and was threatening the owner.

Owner says: Clancy got along well with my other female cats. He may not like some other male cats. He is current on vaccinations and has a rabies tag and certificate. He started showing signs of diabetes in 2010 with much inappropriate urination and loss of body mass.

He is currently on Lantus, getting 1.5 Units, twice per day, and eating DM food since diagnosis.

Owner tells us: He appears to be doing well physically; however, he’s been living in a small boarding room under big stuffed chairs for 5 months and it’s not a great arrangement for quality of life. Although he uses his litter box at the boarding house, he has had a few small urination accidents as of late.

The owner is trying to find a new place to live, and hopes maybe someday he can retrieve his sweet cat, but if the right home came along before then, Clancy Romancy could go to a new forever home.
Posted by Jennifer at 6:17 PM