Sammy in Cumberland, MD is safe and in rescue 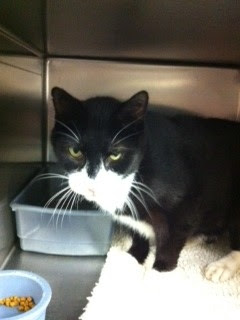 September 20, 2011: Sammy's rescuer has just notified DCIN that he is safe and with a local rescue. He is settling in well. Because the rescuer did not tell DCIN what rescue Sammy went to, we are removing him from our adoptables list.


September 15, 2011: Owner surrendered and rescued by an amazing lady who is severely allergic to cats, little man Sammy needs a home fast, for now he has to live in the rescuer’s basement. He’s a black and white short hair neutered male, who could be between 10-15 yrs old. Formerly overweight, he was kicked out of his home and kept outdoors for years because he was have urination problems.

He has had no problems using his litter box while in foster care, so the urination problem isn't happening now. He's a very good boy about his litter use.

Today he suffers from neuropathy but is at a vet clinic getting a curve done and will start Lantus and DM food.

He is laid back and friendly but has cat-ittude. After a nice petting session he might try to nip you, but many of us know that behavioral issues are easily overcome with the right kind of love. Good with kids, not afraid or aggressive.

Previous diet was Meow Mix wet and dry. Pictures are coming.
Posted by Jennifer at 11:11 AM