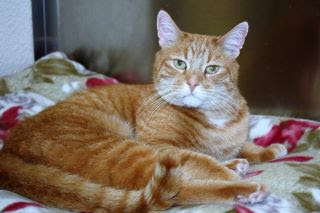 January 10, 2012--We learned on Facebook that Buddy had to be euthanized:


I'm sorry to report that Buddy, our special diabetic kitty at the Pet Adoption Center, lost his battle with diabetes today. he had been slowly going downhill the past few weeks and he really could not be "fixed" anymore so the decision was made to let him rest in peace. Thank you all for you sweet comments regarding him when I first posted his pic on this web site. You are an amazing group of people.

We are all so saddened when a diabetic cat cannot make it out of a shelter and into a home and heart. Rest peacefully, Buddy, knowing that many mourn your passing. ~V

September 21, 2011: Posted by the Pet Adoption Center on DCIN's Facebook page.
-----------------------------------------------
Buddy, along with his roommate Squeakers, was turned in to the Mary S. Roberts Pet Adoption Center – a non-profit no-kill shelter in Riverside, CA -- in January 2010 by his owner who could no longer care for them. (They had all been living in a trailer attached to a car and then the trailer burned down and they could not all live in the car.) This was very traumatic because Buddy and Squeakers had been with this person their whole lives -- close to 8 years! It took them a very long time to adjust to shelter life, but with the help of dedicated volunteers and staff, they started to adjust.

Although Buddy was becoming more used to people, there was concern for him because after several months he started getting increasingly thinner and lethargic and a little raggedly looking. At first it was thought to be a result of stress, but, as a result of a visit to a local veterinarian, it was discovered that Buddy has diabetes. He receives insulin injections twice a day, and an occasional visit to the veterinarian to check his blood sugar levels.

That being said, what you really need to know about Buddy is that he is a sweetheart. He is a calm, quiet, gentle -- and healthy! -- cat who is most happy when he is able to hang out with his humans. He loves to be petted and brushed. He will make some lucky person the perfect couch potato companion! He just needs a home of his own with a sunny window, comfortable bed, healthy crunchies, and an owner who will give him time to adjust to a new home and carefully monitor his well being so he can live a long and healthy life. His ex-roommate Squeakers just found her forever home a couple of weeks ago; we would like to see Buddy get a second chance at a happy life, too. If you know of anyone interested, please contact the Pet Adoption Center at (951) 688-4340.
Posted by Jennifer at 8:31 PM