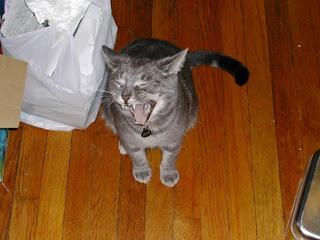 This is the chip-in for Elliot's Welcome to the Vet visit. 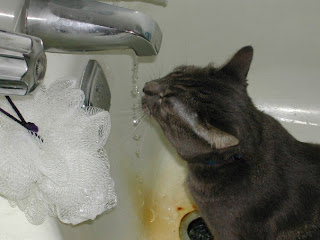 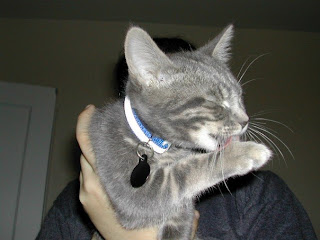 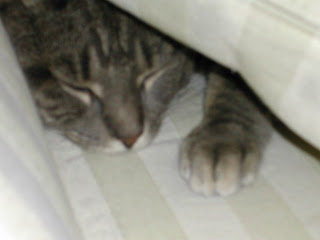 October 2, 2011--Friends of DCIN got Elliot to Marc for his flight on Wednesday to FL and Jennifer F, but Elliot had other plans. He had had enough of being moved around and was too upset to go onto a plane. DCIN placed Elliot on Wednesday for boarding with a vet, but the vet's staff were unable to meet Elliot's needs because they were intimidated by his anger. A DCIN friend, Amy, retrieved Elliot from the vet and Jennifer J took him to her home that night.

Elliot continued to be difficult to handle. On Saturday, DCIN transported Elliot south for fostering with Uncle Don in rural VA. Rest and relaxation at Spa Don seems to be exactly what the doctor ordered. On Sunday morning, Elliot's BG level tested at 364 and he received 1.5U of Lantus. There was very little drama about the test or the shot. Don, with the soothing Southern accent in his voice, is talking to Elliot and explaining what is happening with him. Don believes that within a couple of weeks, Elliot will be emotionally ready to start considering a permanent home.

September 22, 2011: SAFE. One word that is easy to type but sometimes it's the hardest one to find for diabetic cats. Jennifer F. an amazing lady in Florida who is new to feline diabetes, but not new to rescue and caring for special kitties has offered to foster Elliot until a home can be found. We are very excited to work with Jennifer and Marc and we thank you and can't wait to see how he blossoms under your care.

September 20, 2011: The email copy and pasted below just came in, there's no question, he's going to be put down if he's not adopted or fostered.


Elliot is a sweet and loving cat who deserves a second chance, living in Philadelphia. He was abandoned by his owner, due to mental health concerns, and ended up with a temporary home with someone who has physical health concerns and can no longer care for him.

He is an 8 year old Domestic Short Hair Grey Tiger, who is not declawed, but neutered. He is about 20 lbs and is a large framed cat. Elliot is happy go lucky and loves to purr and be pet. He can be difficult at times when he wants to run out of an open door, or to eat on his schedule. He likes to sleep on the tile bathroom floor, or in a human bed. At the vet he is usually frustrated, but calms easily. He loves to be reassured and is incredibly loyal. He loves his little sister cat and likes to play with his older sister. He has never been around dogs or children.

He was diagnosed in June 2010 with diabetes and was exhibiting weak back legs and excessive urination. His legs are better and his urination is not as excessive. He still has excessive thirst and loves his water bowl. He is used to receiving his 2 units of insulin twice a day. He loves his can of wet Friskies when he gets his shots, and grazes on Purina food during the day. He is missing two of his fangs and does prefers to urinate on a re washable pad, rather than his litter. He likes a clean litter box and will use that as well. He is FIV negative and FeLV negative as well. He was tested twice in 2003.

He is at risk of being euthanizing at this point. Every shelter I have contacted has said that they will euthanize him or for me to have him euthanized. I have been trying for months to find him a home. His home has to be emptied by Sept 30th, so time is running short, sadly. We have been kicked out of our current location and I cannot take him to the new location. He is a love and deserves a good home. He was abandoned by his former owner and is desperate to be loved again. He certainly has his moments, don't all cats, but he deserves a home where he can be treated and loved. I hope we can find him a home quickly, where he will be happy. Thank you.