August 15, 2012--Loveable Monkey quietly passed away yesterday while his Papa Don was at work. Don has gently and lovingly cared for Monkey for almost a year. Monkey had multiple medical problems--diabetes and heart problems among them.


Since Saturday morning monkey has not been eating much, maybe a 1/3 of his food if that. He also has not been drinking much. He has peed today and there was a poop at this mornings cleaning. He is alert for the most part. When I go and check on him he will look at me. He seems more lazy then usual. He was coming out to lay on my pillow but, does not even do that now. His bgs are up a little, not bad though. ...This has nothing to do with his legs.

Monkey is not bounding back, and his urinary output is also now down. Monkey is going to the vet today for a full workup--bloodwork, urinalysis, whatever procedures the vet thinks are needed and DCIN can afford to find out what is wrong with this dear little man. Please help if you can with his Chip-In.

August 30, 2011--Monkey has a new home. He will be living with Don and Associates. This is an adoption, not a fostering. Monkey's foster Mom plans to drive Monkey all the way to Don. Good for you for having a furever home, Monkey!

August 2, 2011---Monkey has been borrowing his foster Mom for two years. His foster Mom (we’ll just call her Mom) found this declawed, neutered DMH with bluish-gray stripes and a peachy champagne and cream striped belly outside, half-dead, crying. He was diabetic when Mom found him. Sadly, this is not the first time DCIN has heard the story of a declawed, diabetic cat being put outside to fend on its own.

“He really is an amazing cat. If things were different I would keep him for myself but I think he has a crumby existence being locked in a bedroom all the time. It’s not fair to poor Monkey I wish I could do more for him but I’m just not financially or physically capable of giving him what he needs and deserves.”

Mom doesn’t know Monkey’s age, but looking at his video and knowing that he has been insulin dependent for two years, I am going to guess around 13 years old. Mom says: “He was 10lbs last time I took him in to vet but I think he has a medium to large frame and he should gain a couple pounds.”

Mom (who is already owned by three cats) keeps Monkey in a “bedroom for his safety and so I can monitor his food consumption.”

Monkey’s purrsonality? “He is an awesome cat! He is super sweet he likes to sleep in bed next to whoever is there. He is totally calm around my parents’ 100lb dog, he LOVES to be brushed! If you hold a brush up for him he will wipe his face on it a bunch of times. Sometimes he will get really frisky and run around the room for 5-10 minutes at night but not every night.

“He is fine with the dogs I have seen him come in contact with. He never hisses at my cats either, my 15yr old cat and him get along fine. It’s my younger 2 they fight with each other and they both hate Monkey. I have only seen Monkey around 10yr old kids and he seemed to enjoy it.”

Monkey has no history of DKA or hypoglycemia while with his Mom. Without his insulin, “he drinks crazy amounts of water and gets diarrhea.” Monkey is on ProZinc, 2.5units 2 times a day. Monkey has not been hometested, and his Mom can’t afford to have his blood glucose levels tested at the vet. He eats Blue Buffalo Low carb High protein Grain free, Natural Evolutionary Diet, Chicken (¼ cup 2 times a day with his insulin) He also gets 7-9 pieces of Whiskas temptations cat treats in beef flavor with his injections. 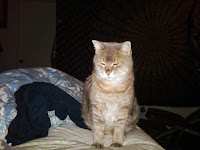 Monkey is missing his front lower left canine tooth, and has excess sebum at the base of his tail. He also has a small abscess on his back that gets cleaned every few days. He has a hard time keeping his back paws clean with traditional clay litter so his Mom uses feline pine litter. Monkey tested negative for FIV/FeLV when his Mom took him to vet in June 2009, and he hasn’t left his bedroom since. He is not current on any vaccines.

His Mom also says Monkey has a history of saddle thrombus. I questioned Monkey’s Mom on that because that is not a condition from which a cat can just get up and walk away from. I asked her whether it could have been a hypoglycemia attack, given that she seems to relate the attacks with low blood glucose levels.

“Yes, it was definitely Saddleback thrombus. I woke up to him screaming and dragging his rear legs. The heavy panting and total distress really freaked me out so I called emergency vet and she met me at the hospital and started him on Heperin. He was prescribed an aspirin regime but I couldn’t get him to keep it down with any sort of regularity so I stopped giving it to him. He had 2 other attacks a couple months after the first one. It’s been over a year and a half since his last attack though. I remember she said his blood sugar was low when he had the first attack, so when he had his other attacks I just gave him some aspirin and karo and would rub his hind legs. I didn’t know it was painful for him. I was told he was only distressed and that’s why he cried. He really seemed to enjoy me rubbing his hind legs though and usually in about 10 minutes he was fine and walking around. The first one was the longest and it lasted over 30minutes but the second one was 15min or less and the third one less than 10 minutes. 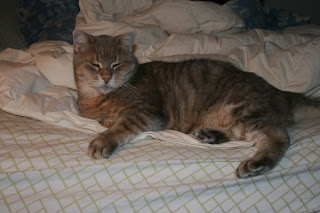 “The Doctor he sees was also very surprised by his recovery. She jokes that he must really like living with me. She thought we should put him down after the first one but my rule is if the cat still eats, it wants to live and he never lost his appetite so I didn’t give up on him.”

Maybe it’s just me (Venita), but I still continue to question whether Monkey three times threw a blood clot that cut off the blood supply to his legs.

His Mom never intended that Monkey be other than a foster cat. ”I don’t have the money to take care of him and I especially don’t have enough time for him. I just felt so bad for him so I took him in and it has been a struggle. I don’t want to euthanize him. I am afraid he is not eating as much because he is lonely. My boyfriend who shared a room with Monkey moved out because I took too long to find him a new home and I think Monkey misses having someone to sleep with.”
Posted by Venita at 6:00 PM