January 22, 2012--Bertha is no longer on DAWS' adoption list. We are removing her from DCIN's adoptables list.

August 6, 2011--Bertha is at the Danbury (CT) Animal Welfare Society, a no-kill shelter. Years ago, I adopted Bailey and Lily from DAWS. It is a great organization.

Bertha is an 11 year old, grey and white female. She came to DAWS on October 15, 2004. Yes, she's been living in the shelter for almost 7 years!! The folks at DAWS call her Big Bertha...she's large and in charge.

In addition to being on insulin twice a day, Bertha also has hyperthyroidism, and gets tapazol twice a day. DCIN was told that she does not have outstanding health issues other than the management of her diabetes and thyroid condition.

Bertha is not a lap cat but she likes attention and pets. It is very easy to give her insulin. Her DAWS adoption page says that Bertha wants to be an only cat. 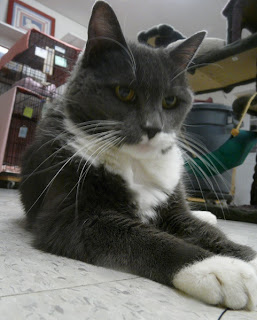