August 6, 2011--Tyson is at the Danbury (CT) Animal Welfare Society, a no-kill shelter. Years ago, I adopted Bailey and Lily from DAWS. It is a great organization. 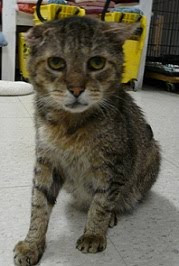 Tyson is a 12 year old, brown tabby male. Besides his insulin-dependent diabetes, he is FIV+. 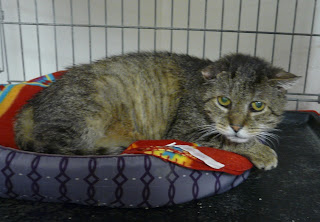 Tyson was brought to DAWS by a good Samaritan after he wandered into a local CVS Pharmacy one night. He must have been a street cat because one of his ears is a bit mangled. He's kind of funny-ugly looking and the bent ear contributes to the effect. Everyone who sees him instantly falls in love with his sad-sack appearance. He'd have left the shelter ages ago if it weren't for his diabetes and FIV status.

Tyson is a lap cat who loves attention and will sit with anyone for hours. He had all but two teeth pulled a few years ago. He eats just fine, however. Recently, he was started on ear medication for a chronic ear condition.

This is Tyson's page on the DAWS website.
Posted by Venita at 3:12 AM

Fantastic cat that more than deserves a good home.