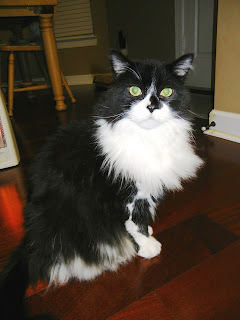 
Thanks again for your help in posting Snuggles on your site and facebook page. I just wanted to let you know that a local rescue organization that has some experience with diabetic cats has offered to take him and find him a home. I will be terribly sad to part with him but I take comfort in knowing that he'll be well taken care of in his new home. I appreciate what you do and the assistance you've given us.

July 15, 2011--Snuggles is a fluffy, neutered black male cat with white markings, approximately 7 years old, in Nashville TN. He is not declawed, and is 12-14 lbs, tall, long, and stocky looking. He is an indoor cat, although he likes to sit out on the deck sometimes.

His Mom says that Snuggles is: "...a timid cat with people that he doesn't know well. He's very sweet and has never hissed or clawed anyone/any animal. He's patient and has always put up with our little dog chasing him around and trying to play with him. He usually sleeps in a bed in his own room though he used to sleep in my bed. He's not really a lapcat although he does love being brushed and pet.

"He doesn't like visiting the vet but he is very calm and easy when he's there. They've always complimented that about him. He kind of acts like a dog in that he'll follow me around the house. He gets along fine with dogs and cats. He's a little scared of children because he hasn't been around them much. He's very sweet and easy going other than his medical needs. "

Snuggles Mom says that Snuggles is pretty bonded with her, but that "...he seems to attach quickly to whoever is feeding him."

Snuggles was diagnosed diabetic in September of 2009. He was taken to the vet because he was drinking a lot of water, urinating excessively, losing weight, and and meowing a lot. Mom suspected diabetes, and the vet confirmed it. Snuggles has no history of diabetic ketoacidosis (DKA) or hypoglycemia (low blood sugar), and no current clinical symptoms of diabetes. He is not being hometested. He eats fancy feast canned food, varieties containing no wheat glutton. He has a good appetite and eats 2-3 cans per day.

The was Snuggles' Mom response when asked about his BG history: "From what I can recall....for the first 9 months or so his levels were always at least 250 or higher. At the most I think it was around 450. The past couple of times he's been checked it's been down around 150. I think they finally found a good dose of insulin for him and he's been doing well for the past 6-7 months."

Snuggles has no other health issues or any behavioral issues. He had "gingivitis about a year ago but it cleared up with an antibiotic and dental cleaning."

Snuggles will have to be tested for FIV/FeLV and be brought up to date on his vaccinations before he is rehomed.

Why does Snuggles need a new home? "We're expecting our first child and I will no longer be working once the baby arrives (due Oct 1st). We cannot afford the cost of his food, syringes, insulin and litter. He also takes up the room that will be the nursery with his food and litter box. We have nowhere else to put these things. I also don't feel able to keep up with the everyday maintenance that he requires while taking care of an infant."

Is the cat at risk for euthanasia? "I don't think so, if we can't find him a home I will hopefully be able to place him in a no kill shelter."
Posted by Venita at 8:46 AM

PLEASE PLEASE PLEASE...I'm praying for an angel to rescue Snuggles! He's beautiful and sounds like such a good purrbaby...and he never did anything to deserve being put out or PTD! I'd take him in a heartbeat if I could, but I can't come up with another $250 pet deposit, let alone the diabetic meds and vet visits he'd need. ;'-(