Savannah in Her New Home


A few weeks ago, I woke up to a commotion-like noise at 12:15am. I stumbled downstairs and flipped on the light for the living room. Savannah sauntered out from under the Christmas tree - which isn't too unusual. She likes laying on the tree on the tree skirt. She then proceeded to spit out what, at first, appeared to be the world's biggest hairball (it was 12:15am, I'd just been woken up, I didn't have contacts in...it all seemed kind of surreal and in slow motion). When it was all over, there was a dead flying squirrel on the rug in the middle of my living room floor.

Apparently this squirrel had the misfortune of escaping from the attic to the basement.


Of course I had to pet her and tell her how good she was for saving mommy from the evil, hairy, scary flying squirrel. She got some treats too.

She looked a little disappointed when I produced BBQ tongs to remove the dead flying squirrel from my living room rug and deposited his carcass outdoors.

Not bad for the one-eyed kitty! This was her first (known) rodent encounter. I wasn't sure how much of a mouser she would be. I guess the jury is still out on the mice...but she sure proved she can get the flying squirrels!

May 27, 2012--We are a bit behind in posting updates; sorry. Jennifer F sent us this update about Savannah about a month ago. Savannah landed so softly.

Miss Savannah was due for shots and a check-up, so she went to the vet yesterday. (She's still not a big fan of car rides though, but she didn't pee on herself.) She got a clean bill of health! She has gained a couple of pounds since I first got her. The vet is very pleased with that. It's a good indication that her diabetes is well under control (or she would be losing weight) and that she's healthy overall. Yay!

Her coat has filled in so much! She looks more like a Maine Coon now. The fur under her chin is so long that it gets in her water bowl when she drinks. Her coat is so thick and oh so soft. When I tell her she's a pretty girl, she looks at me as if to say, "Well of course."

Savannah is my first long-haired cat. I was a little concerned with hairballs. She hardly coughs any up...and when she does, she's kind enough to go down to the unfinished basement. I find very few surprises on the carpet.

She is such a faithful companion. I come in and out the back door of my house; the top half of the door is glass. When I put my key in the lock, Savannah comes running to the door! Her tail is straight up (and oh so poofy) as if she's waving at me and she's meowing all the way "Mommy's home! Mommy's home!"


In November I was finishing my Master's Degree. Savannah liked helping me write papers. :-)

She's a spoiled rotten girl. If she can't find a patch of sunshine to lay in, all she has to do is give me the pathetic look and I'll open the front door for her so she can lay in the sun.

She is apparently very comfy here. She's taken to laying on her back with her legs wide open. I guess modesty is optional. ;-)

November 23, 2011 - It doesn't get much cuter than this. Savannah was a pirate for Halloween and one of the prettiest pirates ever. 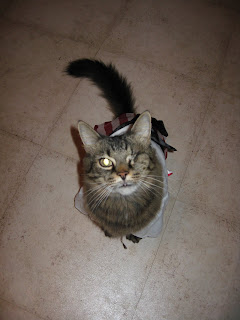 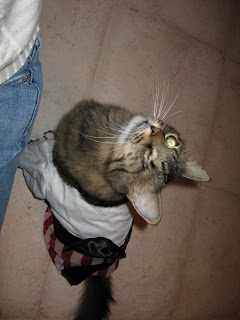 August 13, 2011--Jennifer F's latest update on Savannah:I just thought you would like an update on beautiful Miss Savannah.


She is still absolutely purrfect! She is sitting next to me on the couch purring as I type. I am so glad she adopted me.


She has settled in better than I could expect. She is taking her shots like a champ! She's had no elimination issues. When I go upstairs to go to the bed at night...she's on my heels. She will jump up at the foot of the bed while I get ready. When I lay down, she'll come up by my head so I can pet her and tell her how pretty she is. When I shut off the light, she goes back to the end of the bed and lays down. She sleeps all night at the foot of the bed. When I get home from work, she's waiting by the back door for me. When I peek through the window in the door, she looks up at me and meows. She follows me wherever I go. She's so sweet and affectionate.


It's so sad that someone would give her up just for being a diabetic. And despite all of the change and turmoil that she's been through, she is the sweetest, most loving, and affectionate cat ever! I think she knows she's in her furrever home and she'll never be sent away again. 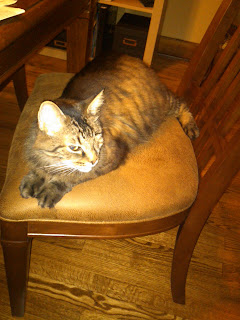 August 8, 2011--Savannah has found a new home and heart. She now owns Jennifer F. Jennifer brought her home on August 6.

Jennifer used to be owned by diabetic cat George. George was insulin dependent for 7 years, and lived to almost 15 YO. But Jennifer has been without a furry friend for a couple years. Savannah is now an "only."

Miss Savannah has made herself right at home today. Once I brought her in the house I set her carrier down and opened the door for her. She popped fearlessly right out of the carrier and started making her rounds exploring around the house. She seemed to know she was home and started getting settled in.

I had to run out to the store and grab a few groceries. When I came back she was waiting for me (and seemed to think I'd been shopping for her). She follows me around the house like a little puppy dog. It's tough to get pictures of her...if I kneel down to get a picture she comes running to me. She loves being loved on, petted, and picked up and held (of course part of that I'm sure is that she likes being told how pretty she is). She just purrs and purrs and purrs. 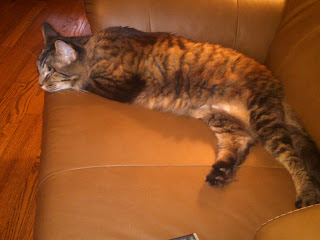 At supper time, she thought she needed my supper. She started by jumping up in one of the dining room chairs across from me and her fuzzy little head popped up looking across the table at my plate. It didn't take long before she changed chairs, and popped up in the one next to me. She was quite determined that she needed steak for dinner too. (OK...I had a brief moment of weakness...she got one teeny tiny bite of steak).

Other than that one teeny tiny bite of steak, she ate her Hills W/D. She took her shot like a champ with no issues.

I've been wrapping up the evening on the sofa, and she's been right here on the sofa as well. She's been so busy exploring, I'm guessing she's going to sleep tonight. 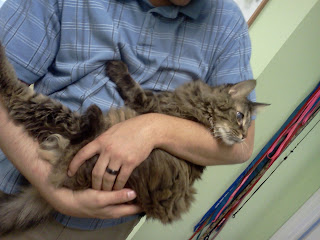 July 17, 2011--Savannah is only 4 years old and a recently underwent surgery to remove an eye but is healing up nicely. Rescued in January 2011 from a Floyd County shelter, she was discovered a few weeks later to be diabetic. She was adopted but after 3 months of trying, her adoptive home had to surrender her back to the rescue. Savannah is now living in a vet clinic. The rescue states that “other cats are beating up Savannah to the point her new mom worries for her safety.” 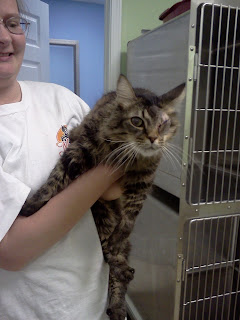 Savannah is doing well on insulin and W/D diet and is fully vetted. According the vet “Savannah is an alpha type purrsonality. She is not mean to people or other dogs --was very loving to everyone at the vet clinic and frequently underfoot since she loves to be with her "family". She doesn’t attack other cats but because she is declawed, she does not like to feel challenged or she will react to protect herself”

DCIN is still waiting on some information and will update this entry when it’s received. 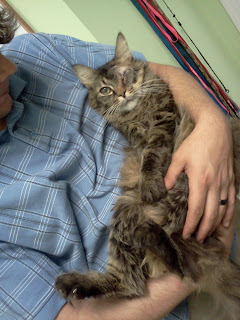