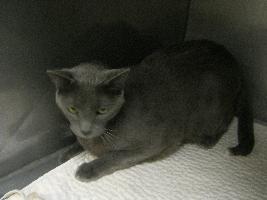 October 12, 2011-What it turns out Stormy had was a serious kidney infection. He went hyperglycemic and had blood and urinary ketones. He was with his local vet for three days on IV fluids (with various supplements) and fast-acting insulin, and is being medicated at home with various things, including antibiotics.

He has turned the corner and it appears he will not be going to the vet again tomorrow. DCIN has spent about $800 on this treatment, and would appreciate Chip-in donations towards those bills. If you can't donate (and even if you can), we appreciate you sending Marty and Stormy prayers and good vibes. (Chip-in widget removed.)

October 10, 2011--Somewhere around July 12, Marty brought Spon to her house for DCIN fostering. His name is now Stormy. He has not been hyperglycemic while with Marty. He's had a vet visit before he came home because he was infested with fleas. He had a dental procedure in August.

Stormy seems to be having an acute Pancreatitis attack and his blood glucose levels have skyrocketed into the high 300s. He is with his local vet getting IV fluids and electrolytes.

We haven't set a goal yet, but yesterday and today at the vet are expected to be about $450.

July 7, 2011--This is Spon. I'm not quite sure how to pronounce his name. Spawn? Spown? The shelter isn't sure either.

Spon is in the shelter run by Cobb County Animal Control. If you "Click to Search Animals" in the right column of that page, agree to the conditions for searching, and search for animal number 532444, you will be able to click on Spon's  name and see his intake form.

That is almost all we know about Spon. He was an owner surrender. He is a 5 year old, gray DSH. He has a sweet temperament (one of the shelter folks referred to him as a big chunky monkey). The form says "Adoption Status: Not Eligible for Adoption." The reason for that is the unstated--he is diabetic and under Animal Control's policies, he (like other animals with chronic medical conditions) cannot be adopted from the shelter by an individual. He is on the rescue list, and if a qualified animal rescue does not pull him from the shelter, he will be destroyed.

I explained that many cats can go undiagnosed, and thus untreated, for months. That was the case with my Maxwell because I had no clue about feline diabetes. I also offered for DCIN to provide the shelter with insulin and blood glucose testing supplies. I know that shelters do not have the time coverage to give cats insulin shots twice a day. I explained that once a day shots were better than no shots, and pleaded that the shelter give Spon a couple weeks for us to find him a home.

The rescue coordinator spoke with the shelter vet, and the vet agreed to treat Spon with Lantus. Because of shelter's hours and the July 4 holiday weekend, the supplies were not delivered to the shelter vet until yesterday, July 6. DCIN was unable to contact the rescue coordinator yesterday, and I hope we are more successful today. I especially want to know her progress in searching for a rescue willing to pull and treat Spon (with DCIN's assistance, as we did with Spuds).

As soon as we have a foster or adoption commitment, DCIN will work with the shelter to get as much vetting done as possible before he is pulled. Jennifer has been able to accomplish that with Hue in North Carolina (not a diabetic and no blog page yet). A foster or adoptive home will need to work on slimming down this big chunky monkey. A weight reducing diet needs to be done slowly, and great information about doing that is on Dr. Lisa's site--catinfo.org. DCIN also can refer a foster or adoptive home to two persons we know who have successfully dieted diabetic cats.

DCIN will be keeping Spon in our Facebook posts because he is clearly at risk. Please keep all fingers and paws crossed for someone to come forward.
Posted by Venita at 4:58 AM