Hadley is at Peace

May 25, 2015 -- Fly free dear Hadley and many hugs to your Mom and your sibling kitties on your loss. Hadley experienced a bout of pancreatitis and mild DKA. However, he could not recover from the fluid on his lungs that happened during his emergency hospitalization. Love always, handsome Hadley. ~Venita


Hadley is OTJ, "Off the Juice," a diet controlled diabetic, in remission. How many ways are there to say it? :) His last insulin shot was the morning of March 25 and his BGs without insulin now range from 50s to the 90s with the higher numbers typically in the morning. He is a strapping 15 pound lovebug who likes to eat (surprise, surprise), nap, play with catnip and crinkle balls, bird watch in his favorite window seat and run races with Molly and Bagheera at night. He wouldn't be here today if it were not for Venita, DCIN and Fancy Cats Rescue Team. Hadley says thank you to everyone who saved his life!!! 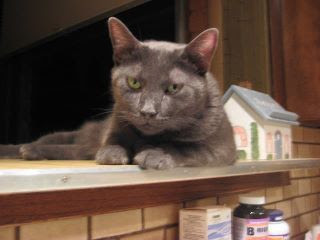 Hadley has been home 4 weeks now and is settling in. Here he is in his favorite spot waiting for his servant (moi) to feed him already. :) He has been introduced to Molly, Harley and Princess and they are getting used to each other. His BGs continue in the 200s and I'm plugging away at dose increases. He's such a big love!

October 31, 2011--Hadley flew home to Laura this weekend. It was a relatively uneventful flight. A delay out of Dulles caused a flight change in Houston, but he was only 2 hours late getting into Chicago.

Hadley's a little scared by the change in situation, but he knows that Laura is the Mom because she has the food. He has switched from Lantus to Levemir insulin, after being 24 hours without insulin because of his travels. His BG levels now that he has restarted insulin are holding in the mid 200s. Laura says he has a good appetite and is a most handsome boy. He is still in his own room and has yet to meet Molly.

October 20, 2011--Laura is adopting Hadley. He will be a new playmate for Molly, the very young diabetic cat (now off the juice) that Laura adopted through DCIN in September!! We plan for Hadley to jet home to his new family the weekend of October 29, 2011. 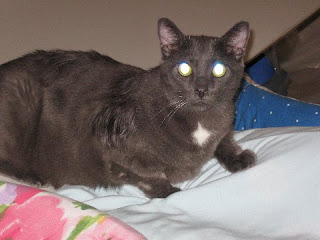 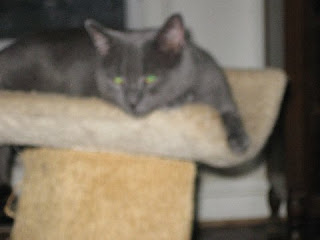 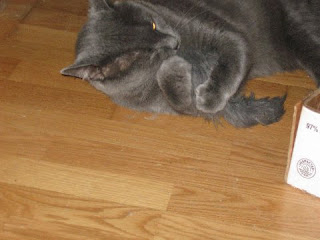 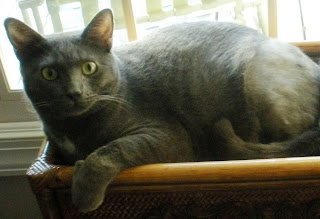 Hadley's foster Mom says Hadley is feeling better. He purrs when picked up, and his eyes are bright and clear. He is alert, active, and relaxed. He is cooperative with the diabetes treatment, except when he is getting his pricked.

Foster mom says that Hadley is a wonderful cat that will make a great household pet.

We don't know how much longer Hadley will be able to stay at this foster home, and hope to find his furever home soon. He is a beauty, and young.

August 22, 2011--Hadley has ended up in DCIN foster care, and needs his own furever home. Please think about opening your home and heart to him. I hear he is an awesome cat!! Let me explain how he has gotten to where he is, in the arms of a Fancy Cats foster Mom.

On Tuesday, August 9, Hadley's Mom came onto DCIN's Facebook group asking for a home for Hadley by Thursday or he would be destroyed. The care of their elderly family members was requiring so much time they could not care for Hadley any longer. Even if DCIN found a foster home and got Hadley into remission, they would not want him back because they would like to travel when Hadley's Dad retired, which will be soon.

DCIN arranged for Hadley to be boarded at his vet for two nights, and then we would transport him on Saturday to Don and Associates for foster care. However, on Friday morning the vet tech let us know that a woman was interested in adopting Hadley. Even though that woman did not have experience with a diabetic cat, she seemed willing and able to learn. DCIN approved her adoption application and both parties signed the adoption contract the same day. We cancelled sending Hadley to Don, and sent Molly instead. Hadley's new Mom wanted to keep him at the vet for regulation, and agreed to pay for that boarding.

Two days after she signed the contract, on Sunday, the adopter emailed me that her research about feline diabetes and her long work hours would make her unable to retrain Hadley to use the litter box, and that he would have to be rehomed if he continued to urinate inappropriately. So she wanted to save him the trauma of an extra move. On Monday, the vet tech offered to speak to the adopter on that issue, because Hadley had been using his litter box the entire stay with the vet. However, DCIN did not wish to adopt to a person who would unilaterally make the decision not to adopt without speaking to someone at DCIN about the issue. Our experience is that cats that urinate inappropriately usually do not do that when their diabetes is being appropriately treated, as we had hoped she would do.

That Thursday, August 18, the foster Mom picked Hadley up at the vet's office. The vet tech showed her how to inject .4 units of Lantus insulin into Hadley. Hadley started settling into his new home nicely, eating well and preening. The foster Mom changed Hadley off dry diabetic-prescription food and onto the Fancy Feast classic line foods. I also advised the foster Mom that .4 units would be difficult to accurately measure, and that she could safely go to .5 units.

DCIN sent the foster Mom hometesting equipment, but she waited until Sunday when Ronda was available to teach her how to test. On Sunday, Ronda found that Hadley was 522 at +6, when he had been 257 at +5. She found that what the vet tech had told the foster Mom was .4 units was actually 4 units, and that my suggestion to move to .5 units took the dose to 5 units. This on top of a food change to low carb. Yikes!!

Hadley was clearly in rebound, and Ronda and I both said that Hadley's dose should be dropped to 1 unit. We will continue to monitor his dose as the foster Mom gives us BG readings.

Ronda also said that testing Hadley was easy as pie, that he is good with the other cats in foster care there, and that he is GORGEOUS!!

July 17, 2011--Hadley is a 5 year old, neutered male, indoor, grey tabby in a home in Potomac, MD. He weighs about 14 pounds, and has a stocky body build. We are told he has tested FIV/FeLV negative, and that the status of his annual vaccinations is unknown.

His mom says "Hadley has a wonderful disposition; he is a trusting, loving and cuddly lap cat! He LOVES to have his tummy rubbed! Hadley has never bit or scratched anyone. He is playful – loves his kitty toys – especially those he can run and chase after. He sleeps in a favorite cat bed. He actually climbs up on my desk when I am using my laptop, sits near the mouse pad and cuddles my head! At the vet he is very easy and accommodating, although anxious when he hears or sees a dog, as he is not used to dogs.

"Hadley gets along wonderfully with our other cat, a 16 year old female Russian Blue - they have become great companions. Hadley is friendly with children and other adults who have visited our home, as long as they are not loud and don’t chase him!"

Hadley was diagnosed diabetic on July 1, 2011, by his veterinarian. He has no history of diabetic ketoacidosis (DKA) or hypoglycemia (low blood sugar). Hadley has been drinking lots of water, and peeing outside the litter box. ("Which we are keeping under control through provision of 2 litter boxes and frequent cleaning.") He also has lost 5 pounds in the past few months. 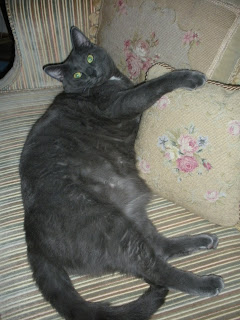 Hadley is on ProZinc Insulin, 3 units twice daily. He has not been hometested but "the vet wants us to start next week." No history of blood glucose readings is currently available. Hadley is eating Hill’s Prescription Diet “w/d Feline” - both wet and dry. He has an excellent appetite.

Hadley had "a slight urinary tract infection just last week treated with injected antibiotics. Also, Hadley fell from a tree almost 2 years ago, dislocating his back hip, requiring surgery to fuse it back together. He recovered beautifully and does not have any sign of a limp."

Hadley is bonded with his Mom and Dad. They adopted Hadley as a 4 ½ month old kitten from their county animal shelter. But his Mom and Dad are traveling out of state at least twice a month to care for 2 elderly parents in end-of-life hospice care. Also, they own a second home out of state where they are spending more time.

"Although we love Hadley and he is a wonderful pet, we are, sadly, unable to give him the care, time and attention he currently needs due to the necessity of our being away from home so frequently at this stage of our lives. Hadley is such a wonderful, gentle, and loving pet and is only 5 years of age, so we would love to find a loving, caring home for him rather than have to have him euthanized."

I asked whether Hadley at risk for euthanasia and, if so, the timeline. I was told his beans are hoping they don’t have to cross that bridge. DCIN hopes that Hadley doesn't have to either.
Posted by Venita at 11:30 AM