"You are truly a silly boy who loves to eat cobwebs, chase his own tail, and hang out on the top of the fridge all day, looking for treats. Thanks to Jennifer J for helping me find him, Paula for fostering him so wonderfully, and Venita and Wendy for helping him get home to me last year despite crazy travel hijinks!" 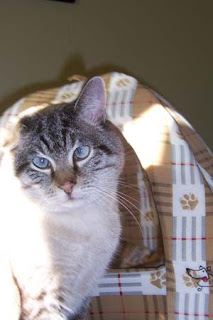 November 29, 2011--Nanner sure landed softly when he chose to live with Suzanne. It's been four months that Nanner has been with Suzanne, and this little Siamese boy with the floppy ear melts his mama's heart on a daily basis. He's also one to keep a close eye on, as he loves scouring the kitchen for fallen food items! His diabetes remains well regulated despite some fallen pasta excursions.

Today Nanner will be getting a dental with a few extractions too - ouchie! Please send all the healing vibes possible his way.

July 25, 2011--Suzanne + Nemo of FDMB adopted Nanner and he was flown to her on July 22. Or, he was to be flown to her. Paula and her husband drove him to ST. Louis, MO, to catch a flight to Newark and then on to Syracuse, NY, but he got stranded in Newark because of severe hot weather.

Wendy and DH pulled him from the Newark airport, kept him overnight, and drove him halfway to Suzanne the next day.

June 6, 2011--In the past few months, DCIN's adoptions of unwanted diabetic cats have generally involved cats that were at risk of being killed simply because they were diabetic. Nanner isn't presently at risk. However, how can you look at that face and not want to give him his own home and heart?


The folks at the KattyShacK in Smithville, MO, are Nanner's angels. Nanner's family lost their home and could not take him with them when they moved in with relatives. Nanner was taken to the vet to be killed, but then surrendered to KattyshacK for adoption. Nanner is currently in a foster home to be able to better control his diabetes.

Nanner is a tabby Siamese mix. Oh my goodness, look at those blue eyes. He is about eight years old and is neutered and front declawed. He is small and underweight, currently weighing about six pounds.

Nanner was diagnosed diabetic with very high blood glucose (BG) levels in November, 2010, when he was taken to the vet for weight loss. His foster Mom Paula (an experienced diabetic caregiver) doesn't think Nanner has ever been properly regulated since he was diagnosed. She is unaware of any past diabetic ketoacidosis (DKA) or hypoglycemia (low blood sugar).

Nanner is thin and drinking too much water, but his water intake is reducing as Paula is working on regulating him on ProZinc, twice a day. Nanner is getting used to hometesting. Paula says that right now it is a two-person job as Nanner squirms (no biting or scratching). Nanner's BG levels are improving under Paula's care, which includes a diet change to low carb canned. Nanner is not a picky eater.


Nanner is very friendly. He likes to sit on laps and get petted. He is sleeping in the recliner that is in our office, which is where he is staying while becoming used to us. I've never had him at the vet, but his general behavior indicates he should behave well.

Nanner was fine with other cats while he was at the shelter, we sometimes put up all the dry food and let him run around with the other cats that aren't in kennels. With ours, I'll know more when he's seen more than someone's paw under the door. His former family had kids so he's OK with them.

Nanner has no other known health issues, no observed behavior problems (he's been good about using the box), and has tested FIV/FeLV negative (date unknown), and the status of his vaccinations also is unknown at this time.
Posted by Venita at 2:04 AM