Claudia did not have a necropsy done, but from what she described to me about his clinical symptoms, it sounds like he had an aggressive cancer.

April 8, 2011--The best news on Simon is that he is negative for Calici Virus. He is often in isolation (which he doesn't like) because he takes so long to eat. FortiFlora works too well, causing him to eat quickly and then regurgitate. Claudia has started Simon on Culturelle (a probiotic) to try to address these eating problems.

Simon and Claudia's other resident and foster cats are very curious about each other, and Simon is scrappy with all of them. He is a little big man and won't give the others an advantage because of their larger size.

Claudia had tried Simon on Levemir, but was getting preshot numbers in the 300s. She has moved him back to Lantus, which he seems to respond to better.

A bit of history--On March 12, Claudia had Simon talk to Dawn Allen and see the vet. He was in severe pain because his mouth was littered with the roots of teeth, there was a breech from one of his missing canine teeth into the sinus area behind his eye, his mouth was ulcerated, and he had a bad infection. DCIN collected funds to pay for that vet visit and for a dental the following Monday. At discharge, the vet's notes indicated possible CaliciVirus, which Simon was subsequently tested for. DCIN intends to contact the vet who originally did Simon's dental and left the roots behind. 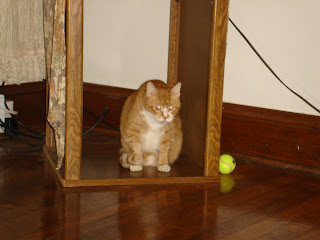 February 23, 2011--Claudia has adopted Simon. Claudia is foster mom to numerous adoptable diabetics listed here on the DCIN blog. Claudia has been looking for a red tabby for awhile, and Simon fit the bill.

Caryl, Shelley, and I transported Simon from Barbara to Claudia on February 20. It was an exciting transport as Shelley got a touch lost and arrived to place Simon in Claudia's arms in Trumbull, CT, about an hour late. Claudia and Simon continued on to home in MA.

Initially, Simon's transition has been a little rough as he is freaked by the transport. He took to the comfort of his pillow-bed in Claudia's bathtub. The last report I had on him, yesterday morning, he was out of the tub and looking around, and although Claudia still couldn't touch, he was sniffing her hand.

January 31, 2011--Barbara needs to leave for N. Carolina by the end of February. Is there anyone who can adopt Simon soon?

Update 1/27/11--It is with great sadness, but not nearly the overwhelming sorrow that allipuffs feels, that I need to announce that Simon needs a new home. For various reasons, allipuffs needs to move to N. Carolina to live with family, and Simon would be at grave risk there because of a family dog that is vicious to cats.

Allipuffs has done a marvelous job getting Simon's diabetes regulated. His spreadsheet of blood glucose levels is here. He is currently being micro-dosed with Lantus, and stays mostly in the 100s and double digits.

Simon had a dental procedure on January 10, 2011. The vet removed 13 teeth. The procedure and the post-procedure medications affected Simon's appetite. But his appetite is slowly improving. Simon eats the classic line of Fancy Feast.

Simon is becoming fearful of his insulin shots. That is another reason for his present poor appetite, as he gets his insulin shot while he is eating. Allipuffs is starting to feed and shoot Simon separately, to disassociate the shot from the food.

Simon is strongly bonded with allipuffs, and he can be cranky around strangers. Allipuffs says Simon loves other cats, likes her young grandchild (although the grandchild is seriously allergic and cannot be around Simon much), and tolerates dogs "as long as they don't get in his face."

Other than his diabetes and dental health, Simon has no other diagnosed medical conditions. His rabies vaccine is up-to-date. He had a rough start in life, being ill as a kitten as he was abandoned and allipuffs nursed him back to wellness. Allipuffs tells me that Simon is much more active with the improved diabetes treatment and the dental procedure. He likes to sit in windows and watch the outside, and he does sleep in the bed with allipuffs.

Allipuffs has not told me her expected date for moving, but I suspect she would like to do it soon. DCIN will coordinate Simon's transport to a new home. He will come with his personal items, his insulin and diabetic supplies, and as many vet records as allipuffs can gather.

Update 12/13/10--DCIN is fundraising for Simon's dental procedure. He has tobacco juice for spit. (Note, the fundraising goal was met. Thanks to ALL!!)

Original post, 12/11/10--Simon lives with his Mom (let's call her alipuffs) in a small town northwest of Philadelphia, PA. She contacted DCIN looking to rehome Simon because her unemployment would soon run out, leaving her homeless.

Darn the US economy and those tasked with getting us out of this mess. Alipuffs and I have discussed finding a foster rather than a permanent home for Simon. Until a decision has to be made about getting Simon a new situation, we are trying to improve his diabetes treatment.

Alipuffs took Simon to the vet and got a script for Lantus. (He had been on the less expensive but less effective Humulin N.) I visited with alipuffs and Simon last weekend, taking them Lantus, a Contour meter and strips, lancets, Fancy Feast, and a grocery gift card (people have to eat too).

Alipuffs and Simon got with the hometesting program right away. Simon loves his new diet. I have started a blood glucose reading spreadsheet because alipuff's computer is too old to support GoogleDocs.

Simon desperately needs a dental procedure. He is drooling brown spit: it looks like tobacco juice. The vet's paperwork says he has Grade IV Periodontal Disease and that the cost with multiple extractions (which we anticipate) will be $535 to $700, plus $75.50 for pre-anesthetic bloodwork. That's a total of $610.50 to $775.50.

The vet wanted Simon on Clavamox in advance of surgery, but alipuffs couldn't afford it. DCIN took her some Clindamycin, which alipuffs says is clearing up the tobacco juice.

DCIN will be fundraising for Simon's dental. I have told alipuffs to make an appointment. The vet wants Simon better regulated before doing a dental.

Alipuffs loves Simon and doesn't want to give him up. This is her post on the FDMB. Let's all pray for compassion by those in Washington, and hope that Simon can stay with his Mom.
Posted by Venita at 1:50 PM