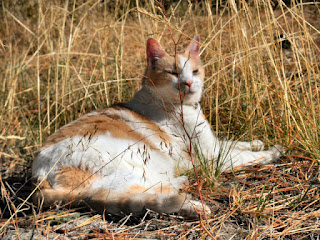 Welcome to the Vastness, Charlie. The Charlie-shaped hole you leave in your Mom's heart soon will fill with her precious memories of you, but she will always miss you and your special ways. May you always feel each others' love.

DCIN helped with Charlie's diabetes for over five years. I love and will miss him dearly. Charlie was a fighter -- diabetes, hyperthyroidism (which he overcame with radioactive iodine treatment), skin cancer, and IBD (which is what took him to the Vastness).

Good-night, sweet prince, and flights of angels sing thee to thy rest. ~Venita

Please Click
This Link to Donate for Charlie's Nose Job

Charlie is such a dear, but he continues to have one apparently serious condition after another. But like the Energizer Bunny, he keeps on going. In January 2012 he was treated for a serious symptomatic hypo, at which time the vet diagnosed him with probable pancreatic cancer and Karin took him home for palliative care. And yet he is still with his Mom and Fur Friends 16 months later. 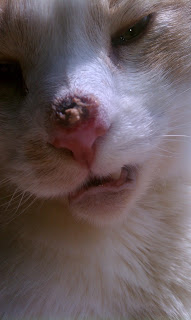 A few months ago, Charlie developed a scab on his nose that would not heal. He is going to the vet today for diagnostic procedures. DCIN has pledged up to $250 for the exam, sample collection, and biopsy. ~Venita

(April 25, 2013 follow-up from Mom: "Diagnosis is cancer - squamous cell carcinoma from sun exposure. Common in cats w/ white noses. Sounds awful, but Dr. just freezes it off and it scars over and doesn't metastasize.  So, cancer, but not a bad one.  Appointment 30th for procedure.

November 10, 2011-Karin's Charlie has been DX with HyperT, which explains a lot about the vague symptoms of unwellness he has had the past year. He started radioactive iodine treatment yesterday at the Feline Thyroid Clinic in Springfield, OR.

DCIN found an anonymous donor to help pay the $890 for this treatment. DCIN also will be using $100 of DiabeticCatCare.com's 2011 donation to DCIN.

Charlie comes out of treatment on Saturday. Please, prayers for Charlie's wellness and Karin's peace. They love each other dearly.

June 6, 2011--We are announcing the identity of AC3 because DCIN needs sponsors to help with Charlie's costs. Charlie owns Karin, and she posts on Diabetic Cat Care (DCC) as Charlie's Mum. Charlie (and other of Karin's pets) have been sick for a few months with vague symptoms, such as lethargy, visible third eyelids, and reduced appetite. Karin believes whatever is affecting her pets is infectious or environmental. DCIN has paid for several vettings since late in 2010, and also provides BCP PZI and other diabetic supplies. DCIN has sent canned food on occasion, and Feline's Pride donated 5 pounds of its raw food. Charlie's account is currently negative--($848).

There is nothing imminent in terms of vetting for Charlie. But to better manage the financing of Charlie's care, DCIN announces a do-over. We are going to bring Charlie's account to zero by assigning some unrestricted funds and part of a large contribution earlier this year from DCC to his account. That way, we will be able to see the progress in Charlie's account through sponsorships.

February 25, 2011--AC3 has recently been to the vet twice more. The cat was urinating inappropriately and dripping blood in its urine. Urinalysis and C+S showed no infection. The cat is being treated with an antidepressant used off-label in cats for inappropriate urination relating to anxiety. Doesn't really explain the blood. I expect another vet visit soon for X-Rays if the bleeding continues.

A DCIN supporter gave a meat grinder to DCIN to auction for a donation. My husband, bless his heart, offered the most money and had me ship the grinder to AC3's Bean. The Bean's grinder had broken--a problem because s/he was feeding raw to all pets.


Picked up the grinder today. It's NEW!! I assumed it would be used. Wow! I am stunned. Thank u.

Update 1/9/11--AC3 recently had a serious infection of unknown origin. Although DCIN often doesn't have the funds for emergency vetting, its financial position at year-end was strong and we were able to pay what turned out to be a relatively low bill for an exam, bloodwork, fluids, and medication. AC3 is slowly on the mend. 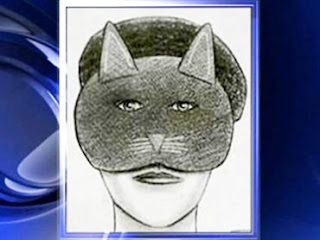 Original post, 12/2/10--The identity of the diabetic cats that DCIN helps usually is public, because DCIN solicits and uses donations from the public. But sometime a Bean is a very private person, and even though his/her circumstances are so dire that s/he needs DCIN's help, I have to respect the person's desire for anonymity. I am glad that many trust me to do that.

This is the story of Anonymous Cat #3 (AC3). The cat became diabetic in the spring of 2010 and the cat's bean is as close to homeless as one could get without being officially homeless. The bean is unemployed and (as I understand it) unemployable, on public assistance, and has several pets that s/he loves dearly and cares for well.

DCIN has helped AC3 by buying insulin, syringes, and testing supplies. One DCIN supporter, hearing that this Bean was using his/her food stamps to buy chicken to make raw food for his/her pets, sent a donation to buy the Bean a grocery gift card. That is an example of DCIN's mission to help not only diabetic cats but also their people.

DCIN hopes to continue to help this Bean care for this diabetic cat.
Posted by Venita at 9:31 AM