March 24, 2013--Humphry's Mom has never been truly serious about DCIN placing him into a new home, so we are taking him off our adoptables list. Have a great rest of your life, Humprhy! ~V

February 12, 2012--Humphry is still diabetic and still being helped by DCIN with insulin and testing equipment.

Gloria is not ready to give Humphry up. Humphry will be 16 this year. But Gloria wants to keep Humphry on DCIN's adoptables list because of her ill health.

August 11, 2011--I am cleaning up files so that I can leave for September, and see that I haven't written about Humprhy lately.

Gloria has been taken off hospice. She is still ill, but her condition is not considered imminently terminal at this time. Rehoming Humphry hasn't been discussed with me for some time, and he seems to be stable where he is. Although Humphry isn't in immediate need of a home, I am keeping him on the adoption list just to keep him on the radar.

DCIN has provided Shelly with a glucometers, strips, and lancets for Humprhy. She provides strips and lancets to Gloria and her aides as they are needed. (In this environment, healthcare supplies sometimes walk away.)

DCIN also paid for a vet exam and bloodwork to check on Humphry's kidneys in March, 2011. I was never told the results, but old Humph is still kicking!!

* Born in 1996. Gloria has had Humphry since he was a kitten.
* Humprhry has been diabetic 1+ years. IDEXX lab tests 9/30/09--blood glucose level of 408 and vet diagnosed diabetes. Owner refused insulin due to cost and Humphrey was put on Glipizide, 2.5mg, BID, and DM (canned).
* Humphry is now on Fancy Feast classic pate and BCP PZI U100. He has a good appetite and PU/PD.
* Treated with an antibiotic for an ear infection in 7/09. He presented with scratching at his ears. This appears to be a continuing problem.
* 7/09 exam showed dental tartar. No dental procedure since.
* 9/7/10--Rabies Purevax 1 year and FVRCP vaccines. Renal functions per AnTech labs...BUN 40 (reference range 14-36), creatinin 1.8 (reference range 0.6-2.4) and urine specific gravity 1.026 (reference range 1.015 to 1.060).
* Humphry has a diagnosis of arrhythmia, but it has not been "appreciated" for some time.

Original post 12/14/10--14 year old, buff Humphry will soon lose his Mom, Gloria, and his home in Pawtucket RI. Gloria has a terminal illness and is on hospice. 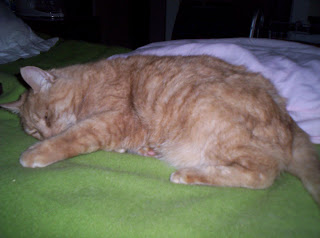 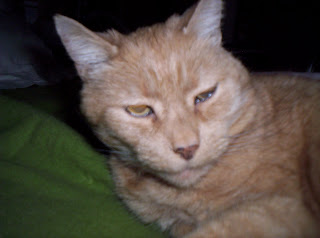 Gloria made plans in her will for a home for Humphry, but that was before he was diagnosed diabetic. The person who was to care for Humphrey is not able to care for his diabetes. Gloria has agreed to have DCIN place Humphry. Right now, a small group of caregivers (Gloria's friends and hospice workers) help to test and shoot Humphry, but sometimes things don't go as planned and Humphry has had some hypo episodes.

Sorry that details on Humphry are somewhat sparse. It's not the sort of situation in which I want to barrage someone with requests for details. I am hoping to get copies of vet records. He is on U100 BCP PZI insulin. He is said not to care for other cats, but he has lived alone with Gloria. He has a short tail...not a stump but it's shorter than the average cat tail. What other information I have about Humphry is on Diabetic Cat Care here, posted by catsten (Shelly), who is helping to care for him.

We have wanted to keep Humphry with Gloria as long as she is aware of him, but it is now getting to be time to start searching for a new home for him. Shelly (a petsitter with her own diabetic cat) is willing to foster Humphry for awhile.


This is a difficult situation to say the least as I don't want to take him as long as she is still in her home. I also don't want to stress Gloria any more than she is stressed already. As I said I could foster him when the time comes.

I didn't realize I hadn't gotten back to you with results from his vet exam. His blood work was actually pretty good. Kidneys, liver etc look normal. The vet felt the problem was the lack of consistent testing and shots. Gloria now has a couple of new people working for her in addition to the previous people. They have all been taught how to test and dose and he is now getting tested and dosed BID as needed so he is doing better. As it stands I think Humphry will be staying with Gloria (unless her condition deteriorates). Thanks to DCIN for supplying strips and lancets. I have a collection bottle for my petsitting customers to make donations that mostly covers the cost of syringes and insulin (I kick in any shortfall). So far so good.