September 20, 2011: Surrounded by love Big Boy left his body at 4:30 a.m today. Dale, his amazing mom this past year told us this: The cancer, low hematocrit, and non-regenerative anemia finally took their toll on his little body. He is going to be sorely missed by the kitties. He always groomed everyone and therefore was surrounded by cats seeking his peaceful nature and calming tongue-washings. He was such a good boy.

Fly free sweet little man, there's an extra special place for you at the Bridge.


Big Boy went in for a dental today since he needs 2 teeth extracted. Unfortunately the pre-dental bloodwork showed abnormalities that are serious enough to delay any surgeries needed: dental and repair of an abdominal hernia diagosed by the rescue in Dec. 2010 before adoption. Possibly there were different vets handling Big Boy at the rescue organization. One vet thought she diagnosed a mass in his abdomen while another vet diagnosed, upon ultrasound, a hernia; however, the second vet didn't feel the mass. Upon adoption of Big Boy we felt there was no mass, just the hernia that could be surgically repaired. Unfortunately Big Boy has gone 4 months (or however long he's had the mass) without treatment or further testing for it. Today the was first time the mass was brought up again. His hematocrit is 10% but he is acting normal. No nasal flare or open-mouth breathing. His gums, though, are pale. He will be tested for hemobart because two other cats in the household have been treated with Orbax for it this spring and are now doing fine. Will start Orbax today in case this is the problem causing his hematocrit to go this low. I do have some Procrit I can use to help his hematocrit elevate if the vet thinks it will help. He is getting a digital x-ray done to see if anything can be determined about the mass. Also to see if there are kidney stones because he is straining to urinate today. If the x-ray is unremarkable, he'll be taken for an ultrasound. Because of the mass the vet will try to get a clean stream of urine from him rather than doing a cystocentesis. Big Boy is such a good kitty. He grooms any cat that is near him. I recently adopted a blind kitty and Big Boy welcomed her into the household by giving her a "spit bath". LOL. I adopted Big Boy because the rescue said he was old and had cancer. Then they changed their mind to just a hernia which could be repaired. I adopted him so he didn't have to die of cancer in a cage and so maybe I could get some treatment for him. I will treat any symptoms he has and if he has to be let go, he'll know he was loved and take his last breath in my arms. He's such a good boy and deserves better than ending his life in a cold cage. 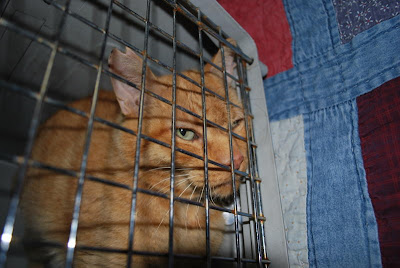 Big Boy was able to grab a ride from Waco TX to OK City with the Above and Beyond Transport Team, which transports for several rescues, including the English Setter Rescue. BB's traveling companions were Winnie and Charlie. We were told that BB was vocal the entire trip. 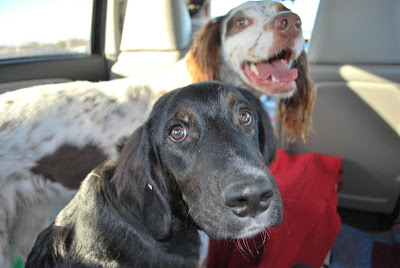 Dale welcomed BB home with a post on the FDMB, which said in part:


He is Home and you'd think by his actions that he'd been here all his life. A little hissing when someone smelled him, but no fighting with anyone. Stay in a room by himself? Ha. No way. He's gotta be right in the middle of everything. Already been out in the penned area enjoying the sunshine and trying to figure a way out so he can explore the rest of the yard. And quite the talker...well actually mumbler. You always know where he is cause he's meowing all the time. 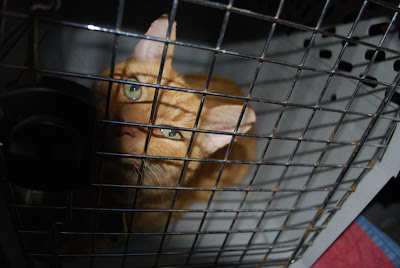 Mid-December when I said I'd adopt him the shelter started feeding canned food only as I asked. His bgs gradually came down. But a 94 I didn't expect after being with 2 dogs all day. Heck, "my" bg was probably higher than his considering all the chocolate I ate on the drive over to pick him up! (I was excited.) DCIN is gonna have to change its name to BDCIN (broken diabetic cats in need). He drank water and drank water all night. Probably over 2 -3 cups of it. Today he's slowed down some. I don't think they gave him anything to eat or drink all day...poor boy. I guess if I were driving 2 dogs and a cat in a closed vehicle I'd be afraid to open the cage door fearing what would happen if he got out. It's off to the vet this week to have that herniated area checked out. I can feel it and it's right at a mammary gland (teat). It's soft but pretty large. If it's truly his colon I don't want to be squeezing it too hard. Will let the vet have a look at it. He also needs a dental. Many thanks to Jean and Patricia who were going to help with BB's transport if he couldn't get on the doggie one. Big Boy...welcome to 2011 and a furever home. 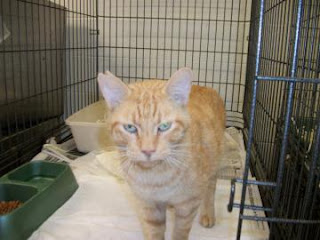 
1. Feleuk/FIV negative. 2. BG......drum roll please........286. Down 100 points from diagnosis. On canned only. All kinds of signs are up on his cage...Canned only! 3. Sugery costs through their vet is the same as through mine so surgery will be held off until he gets here unless something changes with him while in their care. 4. Transport coordinator will put something together for him. They have a dog going to Illinois that BB may go with. She didn't know the dates. Said that Baylor University is there and some of the students volunteer at the shelter. Since it's the holidays people will help transport an animal if it is going their way. She said they are very willing to transport their animals...even flying some to their destination. So I'm not to worry, they'll get him to me. Yippee! All good news on the BB front.


Big Boy is a senior aged cat (likely older than 10, but he was found by someone and brought in, so we don't know his exact age) at the Humane Society of Central Texas in Waco. I am his primary caretaker there, and after I noticed him drinking excessive amounts of water, we finally got a fasting BG reading for him: 367 on a human meter. He is currently on a diet of canned food only, but we rely on donations for food, so he gets whatever we have. He is not on insulin at the moment. Because he is a senior and we are really full, have been since spring, we do not have the funds to start him on insulin unless we get some donated. I have access to a bottle of Lantus at home (a sample my diabetic mother got from her doctor and does not currently need), but once that runs out, I worry about getting him any more. We also are unable to space insulin shots out by 12 hours, the best we can usually do is 8:30 and 5:30, since we do not have staff on-site full time. The last 3 diabetics (2 cats and a dog) were sent home with me, but I am too full to take any more fosters - I'm at 19 cats, 1 ringworm kitten and 4 dogs, plus a feral cat colony. I wish I could take him! 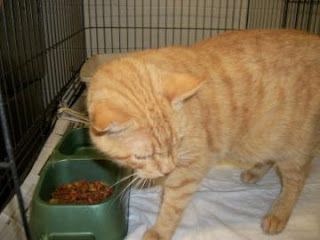 Big Boy was recently neutered and when our shelter vet checked him, she also found what is probably a tumor on his abdomen, but it does not seem to be causing him any discomfort. He is in good spirits for a shelter cat, and his health issues have only been caught through careful observation; he does not act "sick." Note that we have not tested him for FeLV/FIV, but we can upon request. We have a border collie/Aussie mix who lives in the Cat Room. Big Boy has had no problems with her or other cats. We are the local animal control intake facility and we do euthanize daily for space. I have been buying him some time, but he is at high risk for euthanasia any day we need to "make space." If we can get him out, he can be taken as a "permanent foster" so there would be no adoption fee. We can also help arrange transport if necessary. He is up to date on his FVRCP and Rabies. 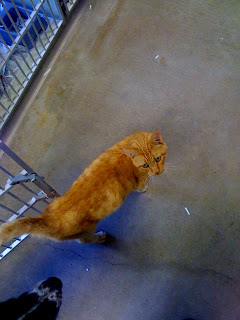 I believe his ID# is A11610563 (looking him up on Petango). For more information, call the shelter at 254-754-1454 during business hours, 11-6 M-W, F, Sa and 1-7 Th, Central Time. Ask for Emily (me) or Kris, our Foster and Rescue coordinator. This picture (to the right) was the best I could get, he won't stay still and keeps wanting to come up for cuddles when he gets out of his cage. -Emily, kennel tech at Humane Society of Central Texas

I have responded to Emily's email offering DCIN help with insulin and testing supplies, should shelter management agree. I have asked for information about Big Boy's dental health and additional information about the tumor on his abdomen.
Posted by Venita at 12:26 PM