Molly, Practically a Kitten, has a Home 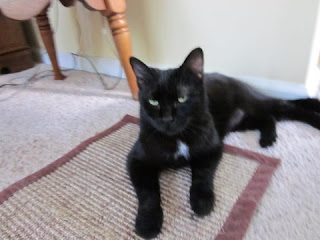 September 23, 2011: It's Official!!! Molly is OTJ - Off the Juice - in remission. Molly's mom sent this today: Hi everyone, I posted on FDMB this morning, it's official, Molly has completed 14 days without needing any insulin! Her numbers have stayed in the 40s (measured with a Relion Confirm meter) and she is still eating her Friskies Mixed Grill. One day she did get into Harley's higher carb. wet food but it didn't seem to affect her BGs much. So long as she stays off the dry and on wet, she should remain diet controlled. Paws crossed antijinx. Molly continues to adjust to her new home and the resident kitties. She loves to "help" me get ready for work in the morning and is ready to sleep at the other end of the sofa with me when I sit down to read at night. She keeps her own counsel for now but that's OK. If took my Princess 2 years to open up, so I can outwait Molly if I have to. :)

Molly we knew Laura was going to be the perfect mom for you, we're so happy that she is giving you all the love, comfort and time that you need and look forward to many more updates to come. 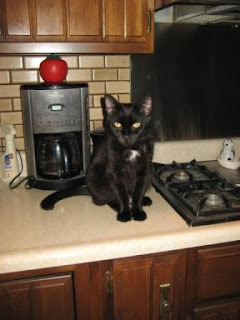 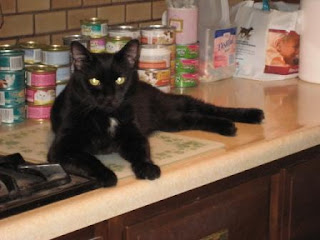 September 11, 2011: Three days off insulin and now in a loving new home. Molly has the best of everything. New mom writes: Molly explored the house today and discovered the kitchen - where she made herself at home on the counter. She also did light exploration of the rest of the rooms while Harley was sleeping. I've nicknamed her my little shadow because she follows me everywhere asking for rubs and headbutts. Poor girl really wants a Mommy. So I loved on her when she asked for it and then gave her space to herself while I did housework and spent time with Harley and Princess so they wouldn't feel neglected.

A little bit sooner and she could have been in DCIN's cookbook. She looks right at home in the kitchen.

August 30, 2011--Molly has found a wonderful new home and heart. Laura in the Chicagoland area will be we welcoming Molly at the airport on September 10. Molly has been fostering with Don and Associates for a couple weeks. We were just too concerned with her not receiving insulin and asked Don to foster. He was more than willing to house Molly, although he continues not to like giving them up. Don only has a purrmanent heart when it comes to cats in need. But we need to get Molly on to her new home, and Don has now taken foster Cajun. 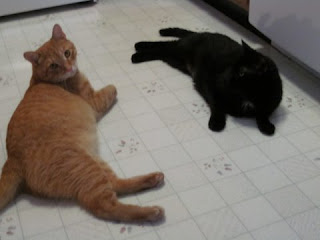 Molly is currently eating canned prescription D/M and has a very good appetite and is on antibiotics to clear up a urinary tract infection likely brought on by the diabetes. Other diabetic symptoms are dry coat and increased urination. The current caregiver says “She is a sweet cat who sleeps on our top bunk bed. She will sit on your lap and be petted when she wants. She was easy at the vet once we got her out of the carrier.”

Molly is FIV/FeLV negative and up to date on her vaccinations. “Molly is a sweet cat who will be a loving pet with owners who feel comfortable managing her diabetes. She probably had kittens before being turned into the shelter and spayed. She doesn’t bite and uses a scratching post.” Molly has recently had the following tests run and the records will be available to the new owner: Fructosamine, VET Screen/CBC/T4, Urinalysis.
Posted by Venita at 5:43 PM

Molly is gorgeous! Wish I could take her, but I can't so I pray she gets a good 4ever home very soon!

Caring 4 a diabetic cat is not that difficult with the right kind of supportive help & care. I truly love my diabetic cat. She is the light of our life. Im in OH.

Could I sponsor Molly?