January 5, 2016 - After being in foster care for almost 3 years, Sunny is FINALLY GOING HOME!  She's going to a great place where she won't have to fight any other kitties for lap time, and where she can have the run of the whole place!  We could not be more excited for her!

September 12, 2015 - Sunshine has been in foster care for over 2.5 years and would really, really, REALLY like to have a home of her own!

She is currently off insulin and will likely remain that way provided that her diet is not changed.  After almost a year in a home with dogs, she still is terrified of them.  She spends 90% of her time in a room by herself.  She allows some contact with a very laidback female cat. She does not tolerate the less laidback male and has not been introduced to two males with a history of being unpleasant.  For those reasons, she should do best in a quiet home with either no pets or a laidback cat (or two).

Sunshine is in SE Virginia but can easily be transported to her perfect forever home.

Please feel free to post any questions or email jenna@dcin.info if you are interested in adding some Sunshine to your life!


March 6, 2015--We heard recently that Sunny has been OTJ (off the juice, meaning not needing insulin) for 40 days. That is a great status for a diabetic cat that has been insulin dependent as long as Sunny has been. She is still seeking a quiet forever home. Might it be yours? ~Venita

January 19, 2015--Sunshine has recovered completely from her DKA, and we have to make one more follow-up vet visit for bloodwork to find out where her kidney values are. We have put her back on our adoptables list and posting rotation. She remains DCIN's only remaining adoptable diabetic cat.

Sunny is doing great. She has transferred to another foster home in Coastal VA and has integrated very nicely there. She can't be adopted into that home, though, because the town has a limit on permanent companion animals. Although Sunny remains insulin dependent, she is getting very little insulin and only every 24-36 hours because her numbers drop pretty low. Therefore, an adopter would have to hometest Sunny with some regularity.

Sunshine's former foster Mom visited her at the end of December and sent us these photos from that visit. Sunny was happy to see her former foster Mom (once she understood she didn't have to go back into the car) and was very happy to be reunited with her catnip pad and toys. ~Venita 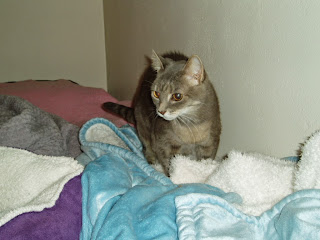 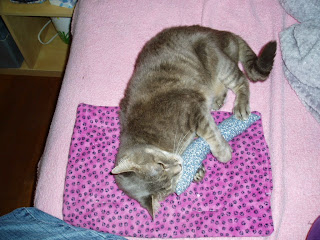 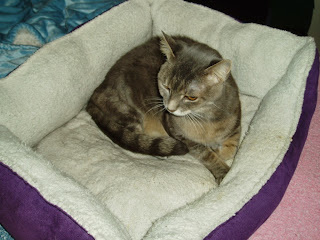 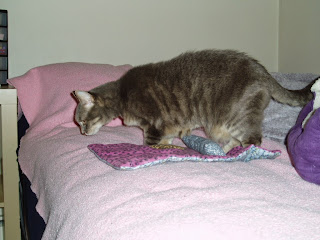 October 25, 2014 -- On October 14, Sunshine developed what seemed to be a mild case of Diabetic Ketoacidosis (DKA). It was diagnosed by her local vet, and we rushed her to the closest 24-hour emergency facility for full-time care. What was a mild case of DKA went south when she developed elevated kidney values, which the veterinarians diagnosed as acute renal failure likely secondary to a kidney infection. Over the course of seven days, Sunny received a significant amount of supportive and diagnostics care, including IV fluids, constant rate infusion of Regular insulin, IV antibiotics, other medications normally given for DKA, labwork (often several times a day), an abdominal ultrasound, and chest X-Rays. The actual source of infection/inflammation was not found.

Local DCIN friends visited Sunny at least daily, and Sunny always looked and interacted better than her labwork would have suggested. True to her picky-eating ways, Sunny was not eating well at the hospital and the visiting DCIN friends had to coax her to eat by offering broth-based appetizers and kibble.

DCIN had Sunny discharged to a nearby foster home (not her regular foster home) after the seven days of hospitalization, where she continues to receive substantial supportive care, including SubQ fluids, oral antibiotics, insulin therapy, and an improved diet. She saw a local vet two days ago and some of her lab values have improved slightly and none have deteriorated.Unless her condition seems to go south, we will wait another month to have her values re-checked. 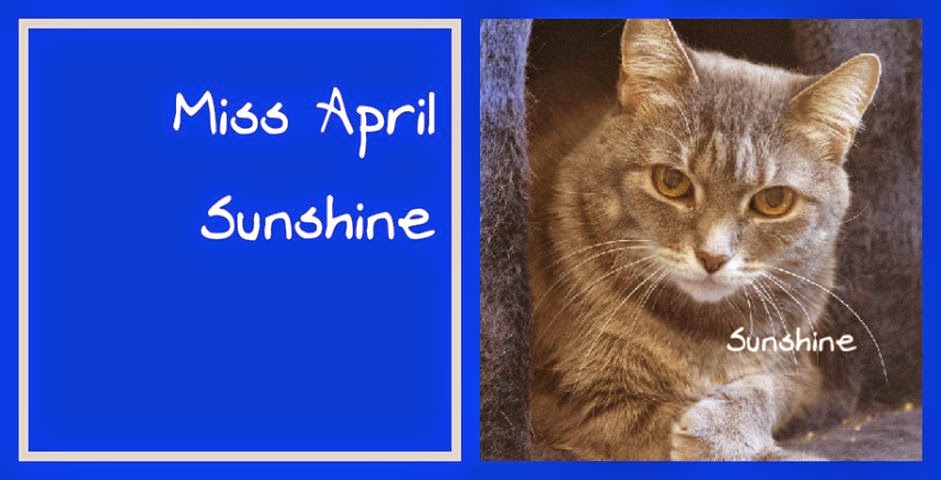 Sunshine has been in her current foster home for almost 15 months. She is insulin dependent and on Lantus insulin.

Sunny has a bright and open personality, though she is very shy at first (and may hide) and can take a long time to warm up or feel comfortable in a new environment. But once she does, she is a incredibly sweet and loving kitty! She loves to be picked up for hugs and will purr madly. She also tends to drool at these times, but a little dampness is worth the love. She makes adorable chirping noises once she's comfortable, and she also does a full body-flop across your hand. She'll ask for attention by raising her left paw. She likes to just be in the room with her person, too, and doesn't need a lot of hands-on attention.

Sunny likes to "bury" her leftover food with a blanket or towel, which can be messy with wet food. She also sometimes pees on towels, but it seems like that only happens if the towel is near the litter box. (This is a new development and is being addressed with pee pads.) Otherwise, she likes to lie on towels. She has a tendency toward ingrown toenails, but she also thinks she's being killed if you try to trim her nails. She doesn't like being restrained in any way, which makes pilling, testing, and so forth difficult. She also doesn't like having her skin tented for her shots, so he foster Mom pokes her in her hanging belly flap (from being spayed) while she eats (vet approval for this).

Sunshine likes to sit in sunny spots, both in windows and on the floor. She really likes to have soft things to lie on (blankets and towels), and she will kneed them and then move them around to fit her desires. Sunny often rearranges all the blankets in the room! She also likes a Thermokitty heated bed in cold weather.

Sunshine may prefer to be an only cat, but she tolerates other cats okay. Some hissing and growling at other cats, and she will smack anyone who tries to steal her food.

She LOVES catnip "cigars" and will bunny-kick them for hours as well as lick them. She shows only slight interest in wand toys, but that could be because the other cats get in the way.

Other than FD, she appears to be in great physical condition. She recently had a dental procedure.

December 25, 2013--Sunshine is a 12 YO insulin-dependent diabetic that has been in foster care through a shelter in Virginia since January 2013. Sunshine and her kitty companion Jibbit ended up in foster care as a fortunate alternative to being destroyed. Their Mom died unexpectedly, and her kinsfolk were going to have the two cats killed. But the shelter stepped in and rescued them. DCIN took the cats off the shelter's census and made their foster home a DCIN foster home.

Our initial understanding was that Sunshine and her boy pal Jibbit had to adopted as a bonded pair. However, after almost a year living in a bedroom together, Sunshine and Jibbit are telling their foster Mom they don't need a placement together. (This is DCIN's previous blog page on the pair.)

Sunshine seems to be a hard-core diabetic at 1U Lantus twice a day; her chances at going off the juice (into diabetic remission) seem slim. That may have been because her diabetes was for some time being treated with Glipizide, which unfortunately is known to destroy insulin-producing pancreatic tissue. She is on a canned food diet, and will sometimes eat raw. Sunny has had a urinary tract infection while with her foster Mom, but other than that and her diabetes, she has been a very healthy girl. Nothing untoward showed up in the comprehensive labwork that was done before she transferred to DCIN. 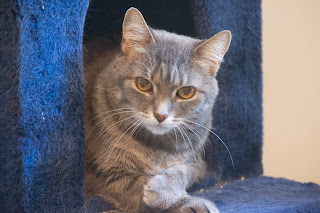 Sunshine is shy but seeks attention from her person. Although not a lap cat, Sunshine is sweet and affectionate and ready to purr and love all the time. Her foster Mom says this about Sunny's personality: "Sunshine takes quite a while to warm up to a person (it took about 6 months with me, in stages), but once she does, she's all love. She does this adorable thing where she tips her head onto my hand, then does a full body-flop across it. She also likes to give hugs - she'll want me to pick her up, and then she just clings and purrs and rubs my cheek with her head. So sweet!"
Posted by Venita at 3:30 PM

Just reading about Sunshine.
However the March entry's year is wrong. It says 2016.
By reading she is still in Coastal VA and "off the juice."

I am Taliesin's mom, and his brother Simba is in advanced heart disease.