July 12, 2014--Gossamer wings for you, Jibbit. It is with profound sadness that I let our friends know that DCIN permanent foster Jibbit slipped his Earthly bonds yesterday and became one with the Vastness. What a dear this 18 YO boy has been for the past 1.5 years for his foster Mom. He had a severe acute-onset medical condition from which two vets said there was no possibility of a positive outcome. Because his foster Mom was away from home, Jibbit left our realm feeling on his face the loving warm tears of another DCIN foster Mom who on a moment's notice changed her entire day to take him to an emergency/specialty vet.

Jibbit, you were cherished by your foster Mom and many others. Your foster Mom gave you hugs and kisses on your handsome face and caring for your body, with the multiple conditions it brought you in your elder years. But most of what she did was bring you home, to be her baby, when others had given up on you for those reasons. Please give her a loud meow or a face slap early in the morning so that she knows how closely you hold her to your soul.~Venita 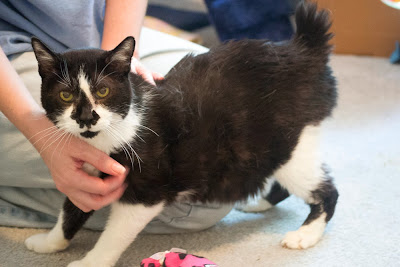 December 9, 2013--Jibbit, a gorgeous tuxedo Manx, is a 16-17 YO insulin-dependent diabetic that has been in foster care through a shelter in Virginia since January 2013. Jibbit and his kitty companion Sunshine ended up in foster care as a fortunate alternative to being destroyed. Their Mom died unexpectedly, and her kinsfolk were going to have the two cats killed. But the shelter stepped in and rescued them. DCIN is making arrangements to take the cats off the shelter's census and make their foster home a DCIN foster home.

Our initial understanding was that Jibbit and his girl pal Sunshine had to be adopted as a bonded pair. However, after almost a year living in a bedroom together, Jibbit and Sunshine are telling their foster Mom they don't need a placement together. (This is DCIN's previous blog page on the pair.)

Jibbit is not a hard-core diabetic; his need for insulin waxes and wanes. Also, the amount of insulin he needs (if any) is very small. Jibbit has physical problems other than diabetes. He often has loose stool (suspected inflammatory bowel disease), he seems to have low-level chronic pancreatitis, and he badly needs a dental, which DCIN will get for him provided he is healthy enough for it. Jibbit is eating both canned and raw food.


Jibbit is extremely social with people and wants to be out with the foster home's other cats. He craves constant companionship and is very laid back. Jibbit's foster Mom says he is so interactive that she can't believe that he is 16-17 YO. But that is what his pre-shelter vet records say.

DCIN understands that with his age and physical condition, Jibbit likely isn't adoptable. That is OK and DCIN and his foster Mom will provide him with supportive care as long as he finds joy in life. However, DCIN knows lots of people who open their hearts and homes to the grannies with special needs, so it is only fair that we post him for adoption and see whether we can find him a furever retirement home. In that way we honor his original Mom, who we didn't know but who clearly loved both her kitties. ~Venita
Posted by Venita at 6:49 AM