February 10, 2015 -- Smokey passed because of heart problems this morning. The Facebook announcement of his passing is here. 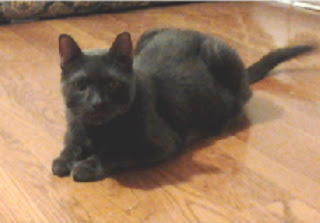 September 8, 2013--On day 2 of our search for a new home for Smokey, a great local home stepped forward. His death sentence was commuted and DCIN started prepping him for rehoming by vetting him for a UTI (the vet said he didn't have one) and getting him an FIV/FeLV snap test (negative/negative) and vaccines. He's been doing great in his rescuer's home (no inappropriate elimination). DCIN's friends donated over $600 for his rehoming, allowing him to go to his new family with the funds that will pay for his vetting and diabetes care for some time.

Smokey and DCIN are blessed by our friends. Without you, Smokey would be just a sad memory. Now, he has a bright future. ~Venita

August 27, 2013--THREE DAYS TO LIVE!!! PLEASE SHARE AND ASK FOR CROSSPOSTINGS. Smokey is in Baltimore. Contact is Venita@dcin.info.

Smokey's family contacted DCIN this morning and said he was on his way to a shelter at 10am. They can no longer tolerate his inappropriate urination. They had him in a carrier 24/7 over the weekend. They won't vet him for a UTI. They are finished and aren't aware of the terror of an animal's ending in a high kill shelter. A gas chamber and piles of dead and dying bodies.

A DCIN friend will be getting Smokey tomorrow and holding him until Saturday when she will take him to a veterinarian to be put to sleep...using a humane method and with love and copious tears. The family can not handle the "reality" of a veterinary ending and refused to do that themselves.

We have three days to get an adoption commitment for Smokey. I will be gather what I can of his medical records. We will have him vetted for the UTI, hopeful that he will get an adoption commitment. Smokey is insulin dependent, on Lantus, and has reasonably good numbers albeit on a 5.25 to 5.5U BID dose. But with better attention to his diet (bread and Doritos should not be left on the counter for a diabetic cat to snack on), his insulin dose could likely be reduced. ~Venita


DCIN friends have pledged up to $530 for Smokey for transport, vetting, and start-up insulin supplies, hoping that will encourage someone to be able to adopt him.

May 13, 2013: Smokey is one cool cat, laid back and affection kitty; he would make a wonderful companion for any person. He is an 8 year old FIV/FeLV negative little man who is altered. He likes cats, loves children and doesn't mind the resident dogs.

He was diagnosed as diabetic on March 25, 2013. His diet has just changed to Fancy Feast classic pate and he will be switching from PZI to Lantus this week.

For more information please contact Jennifer@dcin.info
Posted by Jennifer at 10:59 AM

We are posting you widely in hope someone will take you, Smokey.
Angela & Henry

This is such a very sad story. I love cats and hate to see them destroyed. I pray that someone has a big enough heart to give poor Smokey a chance to enjoy the rest of his life. Its just not fair. Its sad...its kind of the same thing that's done to the elderly. God Bless you Smokey ♥

I get so angry when people blame "inappropriate urination" on their cats when really it's usually always something health or behavior related that can be fixed. It especially angers me because my cat had diabetes and a urinary tract infection at onset. I knew that he would never normally urinate on the floor and this is what prompted me to take him to the vets. He tolerated the insulin really well - he would even come when I called him for his "insulin". My girl started urinating on the floor and I promptly took her to the vet to learn that she had painful bladder stones and kidney disease which we are now managing just fine. I wish I could take Smokey, I already have 6 rescue cats and feed 2 ferals... I also wish that there were stiff penalties for "abandonment" for pet owners. Every year we euthanize millions of cats and dogs. Why? Why can't we change something? Obviously people are still not spaying or neutering but it's more than this. Many people seem to think of their pets as disposable objects. I will never forget being at the shelter to donate supplies once and seeing a man drop off a dog. As the shelter tech lead the dog down the hallway toward the kennels, the dog kept looking back toward the owner with a very confused/sad/scared look in his eyes. It's been years and this still haunts me. How could that man see that and still walk out of there without his friend? I hope that Smokey finds a home. As I said, diabetes in a cat can be pretty easily managed. Shame on his previous owners for not even being willing to pay for a urinalysis. They should be banned from ever adopting again. <3