April 5, 2013--The gorgeous Missy moved from NC to CA on March 13, 2013, and is doing really well. Her face-to-face introductions with the resident cat and dog have just started and have been going better than Missy's new Mom thought they would. Missy's at-home blood glucose levels have not been high enough to warrant insulin, so she is technically off the juice.

Missy adores being brushed and is acting more like a kitten than a 11 year old! Missy is exploring every place in the house, jumping from chair to chair, and watching the birds. But she makes meals of any greenery, especially catnip plants. ~Venita


Click this Link to Donate to Transport Missy to Her New Home!

After a massive blitz on Facebook to find Missy a new home, she has found the most incredible family in California. Thank you all for the massive outpouring of concern and sharing to make this happen. Missy's new family will include one other cat and a cat-friendly dog. Missy will be staying for a few days at a local foster home, then winging her way to Los Angeles where her new folks will retrieve her. We will continue to let you know how Missy is doing.

Meanwhile, we need to raise $300 to get Missy to her new home. We thank you for any amount you may be able to donate through the YouCaring.com link above and for your well wishes for a uneventful flight and a happily furever home! ~Venita


February 27, 2013--Achoo! Sniffle! Cough! Disrupted sleep! Those have been the reactions from Missy's Step-mom to Dad's two cats since Dad brought Step-Mom home. Mom's serious allergy has been a drawback to a happy home, and with Missy's diabetes diagnosis in September 2012 adding financial stress and disrupting needed travel for a parental hospitalization, enough is enough.


Missy must be rehomed by March 13, or she will be PTS

March 13 is the day that Missy's Dad and Step-mom close on a new house, and the house must be cat free. Missy's littermate brother, not being diabetic, has found a probable new home. But no one seems interested in this gorgeous, long-haired calico girl (spayed), just because she is extra sweet. Missy will soon be 11 YO, and has been with her Dad for nine years.

Missy is accustomed to being an indoor cat, and isn't up-to-date on her shots, but she will be before she is rehomed. We are told she is FIV/FeLV negative. She appears to have an average build and weighs about 12 pounds. She doesn't like being at the vet (she is described as fractious and has elevated respirations and pulse) and has gone on a hunger strike when boarded. She is on 2U BID ProZinc insulin, and her recent at-vet curve shows numbers in the high double digits to mid 100s. At the previous at-vet curve, she was given dextrose by mouth because she was in hypoglycemic numbers, although not symptomatic. Missy is on a Hills Prescription dry food diet and is enthusiastic about her food. 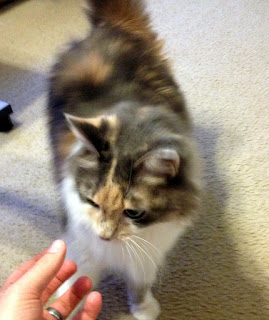 Sure looks to me like Missy is a great candidate to go off-the-juice (off insulin) with an insulin reduction and a low-carbohydrate canned or raw food diet. She isn't having her blood glucose levels tested at home, so she might be fractious with hometesting in a new home situation. An adopter would have to be careful with the diet change and perhaps consider sort-term alternatives to BG testing (such as urine testing).

Missy has some moderate dental problems--tartar and gingivitis. She has never had a dental cleaning. The vet records show that the primary initial sign of her diabetes was inappropriate urination and because of a suspected urinary tract infection, she was given a Covenia shot.(Covenia is reported on several Internet sites, including Dr. Lisa Pierson's catinfo.org, as having the potential for life-threatening side effects, especially if given multiple times.) She also had some weight loss, which was difficult to discern because of her fluffy coat. 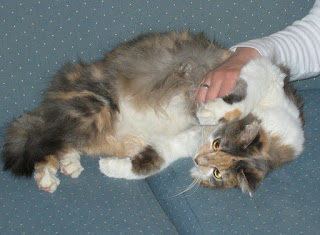 In mid 2011, Missy had a large cyst on her tail which was lanced and drained and she was given a Covenia shot. The vet records warn the cyst could return and might require surgical removal because of its size, including an amputation of the tail. "Surgical removal is not indicated unless inflamed or traumatized." There has been no observed recurrence of the cyst.

Missy's Dad says Missy is "not a lapcat, but often seeks affection. She is not aggressive. She does get her claws going when being bathed." (I agree Missy. If I were a cat I would show my claws if someone showed me a tub.) Dad says she gets along with other cats well, has had no exposure to dogs, and generally avoids small children. He also says she does well with the insulin injections, which she receives while she is eating breakfast and dinner. ~Venita

Angelcakes, thank you. Please send me an email at Venita@dcin.info and I will get the applicaiton process started.

Did this work out? (Fingers crossed!)

I did not hear from Angelcakes. :(