Peanut Butter has a Home!! 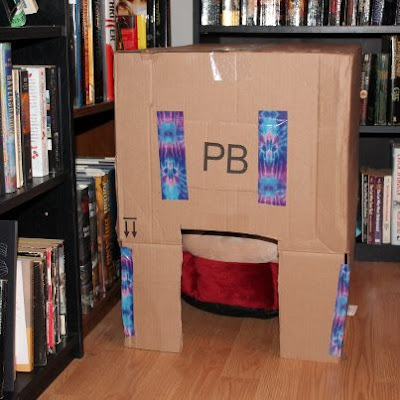 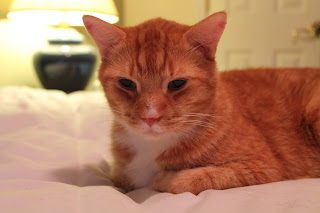 November 28, 2012--Peanut Butter is doing great in his new home. Upon arrival it seems he got an upper respiratory infection but was taken to the vet and is now recovering nicely. His BG's were in the 300's but now down to the 100-200 range. He's eating wet food. Since he's been sick he has not yet met the other kitties in his new home. ~JennF

November 20, 2012--Peanut Butter had a new bed and a "den" waiting for him when he arrived home on Sunday. He's already been to the vet and his BG levels aren't too bad (low 200s without insulin for 24+ hours). He is going onto Lantus insulin.

Thanks so much to his new Moms for adopting this dear boy. He has a very soft road ahead. ~V

November 16, 2012--Peanut Butter has been pulled from the vet's office and is in foster care with another rescue in South Florida.

PB has been adopted and will soon become a resident of the great state of Tennessee. He will be flying on Sunday, November 18. We thank all who assisted with this rescue--by networking, by donating for his flight, and by sending best wishes. We especially thank those with "feet on the ground"--the person who pulled him from the vet's office, the foster Mom, the airport transporter, and the adoptive Mom. ~Venita 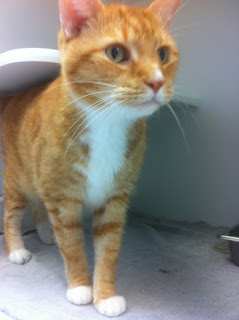 November 12, 2012--Peanut Butter has only ONE WEEK to live! His was "dumped" at a vet's office in South Florida after his owner decided his diabetes was too much work. He is only 8 years old. He is receiving Prozinc insulin either 1u or 2u twice a day. He's in good health and great with the hospital staff. We are waiting for verification of his FIV/FeLV status. This boy does not deserve to die because his owner didn't want to care for him! Please contact JennF@dcin.info

Do you have a location for this cat? What state?

Posted on Urgent Cats of Broward and tagged some Broward friends -