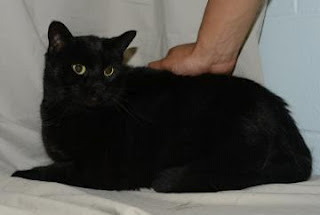 January 27, 2013--Soldier is doing FANTASTIC. Although not in a forever home yet he is really enjoying his time at his FCRT foster home and living it up with his other foster kitty brothers and sisters. He prefers a female kitty named Trina that is there with him. She is a maternal loving girl so its sort of like a yin and yang when they are together.

October 13, 2012--The most handsome Soldier is not coming into DCIN foster care after all. DCIN has worked a deal with Fancy Cats Rescue Team (FCRT) to take this boy into their rescue system. With FCRT, Soldier will be given the care he needs, and adopted to an appropriate home. DCIN sincerely thanks FCRT for finding a place in its foster system for Soldier.

Because FCRT is taking Soldier, Bear is moving from being a DCIN foster cat in the FCRT system to a DCIN foster home. DCIN is very happy that FCRT offered this fostering swap, and look forward to Soldier finding the home and heart he deserves. ~Venita

October 10, 2012--Despite Soldier's non-diabetic status, the shelter vet will not clear him for adoption because of the single high blood glucose reading the vet observed and his past reported clinical symptoms.

To save Soldier's life, DCIN is bringing him into foster care. We will fly him to his foster home ASAP. Hopefully, Soldier will find someone among our friends with a spot in his/her home and heart for a youngish, handsome black cat that simply did not have luck or a shelter vet on his side.

October 4, 2012--Soldier went to the vet this afternoon and his BG level was 101--not diabetic. Amazing what a bit of time outside the shelter in a foster home and a change to a low-carb wet food can do. The vet also did an exam and found him healthy, a big boy but not obese, and some problems with tartar and a touch of gingivitis. Out-of-range values on his September blood work, according to the vet, all likely stress and diet related.

Soldier will be going back to the shelter. I have suggested that the shelter try to keep him de-stressed and on low-carb wet food, maybe by moving him into its foster home system. I also have sent them a glucometer and test strips so that they can test BG levels in house.

I did tell them that should the shelter vet continue to want to kill him even though he is not currently hyperglycemic, that DCIN would take him. Same thing should he return to a hyperglycemic condition.

I sincerely thank everyone who donated to Soldier's chip-in today. I believe that the shelter will be paying for today's visit to the outside vet. I will be contacting everyone who donated for Soldier to offer a refund. That may not happen until tomorrow morning. ~Venita 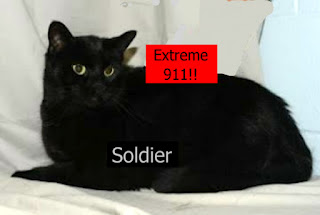 This afternoon, at DCIN's request, the shelter is taking Soldier to an outside vet to get an exam, a blood glucose test, and an evaluation of the bloodwork he had done in September, which had some out-of-range values. We don't even know if his BG level is still high--stress reduction and a better diet may have broken him.

If Soldier is healthy, DCIN will pull him. Even if he seems broken, we can't send him back to a shelter that grows diabetics and then kills them. It's not his fault that he's not making insulin; he's been fed a crappy dry food diet and held in a shelter for five months. We will have the vet hold him until we can get him on a plane to a DCIN foster home in coastal NJ.

We need some money to take care of Soldier--the vetting, the boarding, and the flight. Can you help DCIN help Soldier?

Note: The chip-in has been closed. An update is posted above.

September 23, 2012: At just 9 years old, this laid back gentle kitty was brought into the shelter as a stray in May of 2012. He was diagnosed with diabetes on September 18th after the shelter staff noticed increased water intake and urine output.

He is going to a short term foster outside of the shelter, but can only stay there two weeks.

He is FIV/FeLV negative, altered and currently not on insulin. His diet will be changed to wet food.